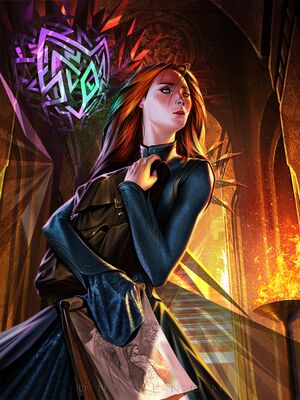 by Petar Penev
Cryptics observing Shallan prior to her bond

Spren seem to bond with people who share their perspective or personality; however, they also seem to seek partners that would complement them.[3] The bonded spren is more likely to be of the opposite gender to their bond-mate, but this is by no means a hard rule,[4] and there are numerous Surgebinders with same-gender spren, such as Malata with Spark, or Renarin with Glys. Surgebinders are able to instinctively tell their spren apart from others.[5] A person is able to bond with two different spren, though most spren aren't going to like it.[6] A person can also bond with two spren of the same order, though this will not increase their powers or strength.[7] Spren can theoretically bond with another spren.[8]

How exactly the bond is decided on varies, though it requires volition.[9] Some spren are highly discerning, while others do not pay much attention to the morality of their prospective partner.[2] Some spren choose the people they bond with individually, while others are more organized and make the decision by committee, then send one of their number to bond.[10]

Forming a bond utilizes the cosmere-wide properties of Connection and Identity in some manner; lessening those attributes, such as by storing them in a metalmind, would affect the bond.[11] It is also harder to form a bond with a heavily Invested being, such as a Returned.[12] Spren are also less likely to bond with a person using a Hemalurgic spike.[13]

The Nahel bond is forged and progressed by the partner stating Immortal Words, also known as Oaths or Ideals, which align with their Order's general outlook and attitude. The first Ideal is identical for all Orders; the latter ones are Order-specific, with Lightweavers in particular stating deep, intimate Truths about themselves rather than Ideals.[14]

As the Radiant states further Oaths, they are brought closer to the spren they're bonded to. The spren's mental capacity in the Physical Realm increases, while the bondholder gains the ability to use Surgebinding more effectively. At some point, the bond also grants the use of Shardblade and Shardplate. However, saying the words - at the very least, in one's mind, though out loud is preferred - is necessary to progress it.[15]

There are some ways to break a Nahel bond. The best-known is when the Surgebinder acts in a manner contrary to the Oaths that they have sworn. This initially manifests by limiting the spren's intelligence and the Surgebinder's capacity to draw in Stormlight.[16] Eventually, it can kill the spren, sending it back to the Cognitive Realm.[17] Revival is possible, albeit difficult, and typically requires the Surgebinder who broke the Oaths to re-swear them, possibly along with progressing to a new Ideal of the Oaths.[18][19] If a spren is permanently killed by the use of a raysium dagger embedded with a gem of anti-Stormlight, the bond will break, leaving the Radiant traumatized.[20]

Another way to break the Nahel bond is to deliberately forswear the First Ideal; this, too, will kill the spren.[21] If the spren is at a point where it can become a Shardblade, breaking the bond will turn it into a deadeye.[22]

There are some ways to break the bond without killing the spren. Dying while upholding the Oaths -- for example, of old age, or in battle -- will send the spren back to Shadesmar, and severely traumatize it, but the spren will survive and can bond again.[23] A Radiant revived as a Returned would not have their Nahel Bond.[24] Spren are able to retain their sapience in the Physical Realm for a time after the death of their Radiant, but will need to bond again in order to keep it.[5] The spren can also safely break the bond on their own, though this requires a great deal of caution.[25][26] This will cause the Radiant pain, but will not be destructive to them like it would be a spren.[27]

A Nahel bond can also be passed from one person to another, similar to a seon bond. This has happened a few times in the past,[28] though the mechanics behind it are unknown. 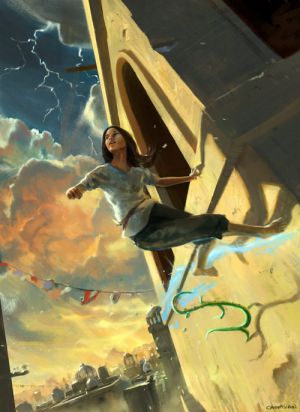 The Nahel bond makes a person a Surgebinder. This allows them to breathe in Stormlight, which grants numerous benefits, such as increased reflexes and agility, as well as incredible healing abilities. Moreover, Surgebinders can use Stormlight to fuel their usage of Surges. Each type of Radiant spren grants its Surgebinder two different Surges, with each Surge shared between two Orders of Surgebinders.[29]

Some Orders have additional, unique abilities known as resonances that occur due to the combination of their Surges. Examples of such resonances are the Windrunners' increased number of squires, and the Lightweavers' mnemonic abilities.[30][31] Rather than being directly caused by the Nahel bond, this is a result of the two Surges interacting to produce an effect together. While some Heralds benefit from the same resonances, others do not - for example, Jezrien will not have a large number of squires, because Heralds do not get squires.[32]

It's possible that the bond also perfects innate skills of the user, without granting additional skills; for example, an expert spearman would become a spearman without equal, but wouldn't become a master swordsman.[33] While this effect has been observed with Kaladin, it's uncertain whether it holds true for other Surgebinders or orders.

When the Nahel bond is at a sufficient strength, the bonded spren can instantly manifest itself as a Shardblade, which, unlike dead Blades, is capable of shapeshifting. Known forms range from strictly militant, such as a shield or a spear,[34] to utilitarian, like forks,[35] or plain rods.[15] Moreover, while a human using a dead Shardblade must wait ten heartbeats before the summoning occurs, a living Blade will manifest instantenously.[34]

While in Shardblade form, a spren can communicate with its partner telepathically.[36] The exception to that is the Stormfather, who, while refusing to become a Blade, can communicate with his Surgebinder regardless of the physical distance, directly in their mind.[37][38]

While a spren can cross over into the Physical Realm without forming a Nahel bond, the transition leaves them only semi-sapient, with loss of self-awareness, memory and intelligence. By forming a Nahel bond, spren are capable of regaining all those things, growing more like themselves the stronger the bond is. However, with a few exceptions (such as the Stormfather), the spren must remain in close physical proximity to their partner to retain their mind. The distance can vary, but some can go upwards of a few miles.[39] If a spren is somehow pushed back into the Cognitive Realm, their Radiant may be able to pull them back into the Physical Realm.[40][41]

Spren can also anchor themselves to a Radiant while looking for a squire to bond, granting them some level of stability in the Physical Realm.[42]

This article is still missing information. Please help The Coppermind by expanding it.
Retrieved from "https://coppermind.net/wiki/?title=Nahel_bond&oldid=160815"
Categories: