“All things must be cultivated.”

Koravellium Avast, also known as She Who Brings the Dews at Dawn and Koravari, is the original Vessel of the Shard Cultivation.[2] 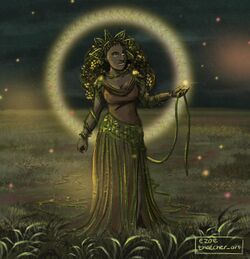 “This woman extended into eternity. ”

Prior to her Ascension, Koravellium was a dragon;[4] however, she seems to prefer human form when interacting with others as a Shard. When speaking with people, she typically takes on the appearance of a dark-skinned woman with a matronly build, a round face and a full head of black, tightly-curling hair. She wears a sweeping brown dress that seems to meld into the undergrowth, and has a voice described as sounding like tumbling stones.[5][6]

Koravellium is calculating and cautious, preferring to set things up from the the background than taking action directly, likely thanks to having front-row view of what happens to Shards that do fight Odium head-on.[5] She is deeply private and secretive, retreating from people and hiding her plans and thoughts from them. This leads to some thinking that she has given up on humanity at large, while in reality she is hiding and planning.[7][8] When she does interact with people, she is rather curt and self-assured, leaving no room for discussion or doubts, though she can be considerate when need be.[5]

She can, however, be kind. She cared deeply for Tanavast, and mourned his passing.[7] She isn't opposed to teaching other Shards how to use their powers, either. It seems this can be used to fool her, though at the moment, it's unclear how deeply her schemes run.[6]

Koravellium was once capable of transforming between shapes of various species, including those of a human and a giant, scaled beast.[4] Being a dragon, she would also be unaging and capable of flight.[9] While presently she can appear as she wishes, her draconic shape is still the "truest" one.[6] Nonetheless, despite being Roshar's only dragon, she prefers to hide this aspect of her nature.[9]

As a Shard, she is one of the most powerful entities in the cosmere, capable of altering souls through Old Magic. She has demonstrated the power to manipulate people's memories, alter their levels of intelligence and emotion, and give them abilities such as metabolizing food into Lifelight, touching spren, and entering visions. She is capable of creating powerful spren and granting them abilities similar to her own, though the only such creation known to exist is the Nightwatcher.[5] As most Shards, Koravellium is additionally gifted with potent future sight. While it's better than Honor's, it's unclear how she compares to Shards like Endowment or Preservation.[10]

Little is known about Koravellium's history prior to the Shattering of Adonalsium. Like all other original Vessels, she came from Yolen.[11] She and Tanavast were a couple.[12] She was present at the Shattering and took up the Shard of Cultivation, then departed for the Rosharan system with Tanavast, now turned Honor.[13] 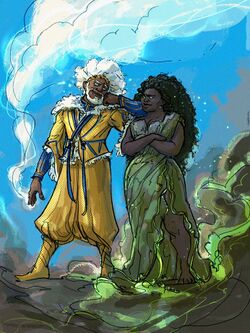 Koravellium and Tanavast were once romantically involved, though the specifics of how are unclear.[12] Notably, the two share the last five letters of their names, and though it's unlikely to be accidental, it's unclear what, if anything, it means.

She publicly withdrew from the matters of spren and Roshar after his death, leading some Cultivationspren to believe she has wholly given up on humanity.[7] As the Stormfather is, in some ways, Tanavast's Cognitive Shadow, he reminds her heavily of him, and she feels about him much the same way as she did about Honor.[14]

Back when he created the visions, Tanavast highly respected Koravellium's ability to predict the future, calling it far superior to his own.[10] Presently, Stormfather feels much the same about her as Honor used to.[15] It's unknown how often the two interacted since Honor's splintering, if at all.

“Oh, you wonderful creature. You have no idea what you have done. ”

Koravellium engineers Taravangian's ascent to Odium, giving him the boon that alters his intelligence and empathy to prepare him for bearing the power. She hopes that he could carry it more honorably than Rayse, thus putting reins on what she considers to be the most dangerous of the sixteen powers. After Taravangian becomes Odium, she introduces herself to him and offers to teach him how to use his newfound abilities.[6]

Cultivation claims that she didn't have the full control over her boon to Taravangian, and that she could only hope that he would become someone who wouldn't pose a danger to the whole cosmere once he Ascended. In this, she appears to have failed, as Taravangian begins to plot a campaign of conquest almost immediately. He intends to use her and her generosity to further his own plans.[6] At the present, it's difficult to tell whether he truly is outwitting her, or if she's aware of what he's doing. 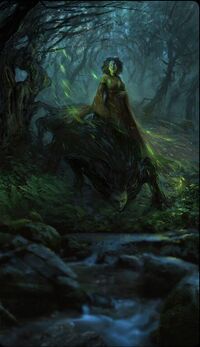 by Artem Demura
Koravellium and the Nightwatcher

“Mother wanted a daughter whose shape and personality would grow organically. ”

Koravellium created the Nightwatcher directly, aiming to make a creature that would grow without the influence of human perception and thought, which is why Nightwatcher's point of view can be highly alien for those who interact with her, even other spren.[16] Nonetheless, she allows the Nightwatcher to interact with humans in limited capacity -- she lets her hold court in the Valley, granting petitioners boons and banes through Old Magic. Cultivation keeps a close eye on those exchanges, stepping in when she sees that the Nightwatcher is out of her depth, and occassinally granting boons in her stead.[5]

For reasons unknown, Hoid and Koravellium are on poor terms.[17] He does not seem to think badly of her, but has his own nickname for her -- Slammer. How it came about is likewise unknown.[3]

This page is probably complete!
This page contains most of the knowledge we have on the subject at this time.
It has yet to be reviewed.
Retrieved from "https://coppermind.net/wiki/?title=Koravellium_Avast&oldid=166281"
Categories: