Greater Hexi is a small nation in southern Roshar during the Era of Solitude.[1]

Greater Hexi lies in the south-central part of the Rosharan continent, between the Tarat Sea and the mountains where Urithiru is located. It shares borders with Marat and Tu Fallia to its south-west and north-east respectively, though there are no apparent geographical features that dictate those borders. The island on the Tarat Sea that lies just off the coast can be assumed to also belong to Greater Hexi.[1]

The country has few geographical features, being composed mostly of desolate, windswept flatlands. They are largely devoid of rockbuds, but rather covered in small gashes, about one to three inches deep, giving it an appearance of wrinkles or ripples. Those "wrinkles" are covered with lichen on the stormward side, and flattened grass on the opposite one. Trees are sparse and scrawny, bending leeward so far as to nearly touch the ground. The mountaintops are similarly bare, scoured raw by the highstorms.[2]

The only known settlement in Greater Hexi is Lexili, near the border of Marat.[3] Another notable location is the Valley of the Nightwatcher, in the mountains that form the country's north-western border.[2]

It has an area around 454,000 km2[4]. In terms of real-world nations, this puts it slightly larger than the total area of Sweden. 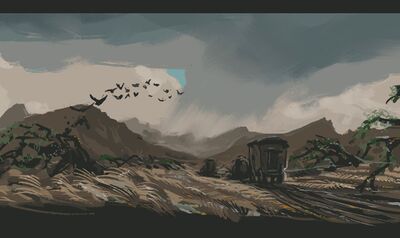 by Marie Seeberger
The plains of Hexi

The people of Hexi are largely nomadic; one can travel there for many days without encountering a village.[5][2] Like other states in the region, it's considered a backwater, even when compared with nearby Marat.[5][6] The people wear their hair in braids and tend to be quiet and uninterested in international affairs. They can be challenging trading partners as their language is difficult to learn; respectful language may be rewarded with gifts while the arrogant are rejected altogether. After a trading visit by Rysn the Hexi left "singing their farewell," which may indicate that songs are an important feature of their culture or religion.[6]

The Hexi religion involves the keeping of sacred animals, and priests take oaths not to eat flesh. Grubs and insects are excluded, however, as they are considered plants. As a result, fresh grain with worms is a highly prized food source. The Hexi also make jerky from dead animals, but it is specifically intended for trading with outsiders.[6]

At this time, it is unknown if there is a "Lesser Hexi", or some equivalent. However, the state is usually referred to as simply "Hexi", making the existence of other Hexis unlikely.[5][2]

In the year 1168, Dalinar takes a small contingent of soldiers into Hexi when he visits the Nightwatcher. They travel with a caravan until they're close to the Valley.[2]