“And all the world was shattered. The rocks trembled with their steps, and the stones reached towards the heavens. We die! We die! ”

Maps is a member of Bridge Four on Roshar.[2]

Maps is flat-faced and balding, and has thick eyebrows and a bushy beard. Although he is initially apathetic like most bridgemen, he becomes gregarious and well-liked, and is able to put other people at ease.[3][4]

"Maps" is a nickname that comes from a birthmark on his chest that he swears is an exact map of Alethkar, although Kaladin does not see the resemblance.[3] His real name is unknown. 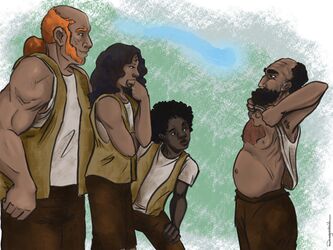 by Dragontrill
Showing off his birthmark to Kaladin, Rock, and Sigzil

Maps was among the members of Bridge Four that Kaladin met in his early days as a bridgeman. He was not one of the first to accept Kaladin's leadership.[2] However, he was drawn to camaraderie and soon became one of Kaladin's supporters.[2][3] After Kaladin's judgement in the highstorm, Maps gave a brief speech addressing Bridge Four. He expressed support for Kaladin and presented Rock with his razor; the other bridgemen appreciated him speaking up.[3] However, he was skeptical when Kaladin later brought up the idea of an escape attempt.[5]

Maps continued to become more relaxed and friendly around the group, and encouraged others to talk. He was among the bridgemen that figured out that Sigzil was a Worldsinger, and asked him to tell the men a tale while they were on chasm duty, much to Sigzil's chagrin.[4]

He died during the fifth battle in which Dalinar and Torol Sadeas cooperated, taking a Parshendi arrow through the lung and into his spine. Kaladin attempted to perform emergency surgery, but was unable to save him.[1] He was one of the people that Kaladin thought about before swearing the Second Ideal of the Windrunners.[6]

This page is complete!
This page contains all the knowledge we have on the subject at this time.
Big Smooth (talk) 20:30, 8 November 2020 (UTC)
Retrieved from "https://coppermind.net/wiki/Maps?&oldid=160354"
Categories: