Ellista is an ardent and scholar at the Jokasha Monastery in Jah Keved on Roshar.[1] She is part of the Devotary of the Mind.[1] She is a diachronic linguist and one of the scholars involved in the Dawnchant translation.[1]

Like most ardents, Ellista has a shaved head. She had never liked dealing with her hair, which leads her parents to joke that she became an ardent just so she could shave it off.[1]

“A large swath of trees out there had been flattened by the new storm. But that was no reason for everyone to get upset!”

—Ellista's musings on the Everstorm[1]

She dislikes disruption and distraction and generally prefers to be left alone. She has a no-nonsense attitude and can be skeptical and judgmental. When she hears fellow ardents arguing about the Everstorm or discussing political happenings throughout Roshar, she takes no interest. She believes that everyone is overreacting to the Everstorm.[1]

She is well-read in her field and seems to be a gifted researcher and linguist, as Urv calls her "brilliant" and notes that she makes incredible progress in translating Dawnchant fragments collected by Bendthel.[1]

She is a fan of risqué Alethi epics.[1]

Ellista moved to the Jokasha Monastery at some point before Dalinar Kholin began receiving visions during 1173. She considers herself lucky to have a place in Jokasha, as it is a desirable location for many ardents. Before becoming an ardent, she thought that scholars did not bicker, but has since realized that was a misconception.[1]

“Look, there’s easy proof here that the same writing system was once used all across Roshar... Not a diaspora of texts, but real evidence they wrote naturally in the Dawnchant. ”

—Ellista to Urv on the historical use of the Dawnchant[1]

After Navani Kholin provides the key to the Dawnchant that she recovers through Dalinar's visions, scholars in the monastery, including Ellista, begin to decode the old texts that they had in their possession. Ellista is glad to have Navani's information, but refuses to believe that the visions were real.[1]

The coming of the Everstorm distracts many ardents from their translation work, but Ellista persists.[1] She believes that she has found evidence that Dawnchant was once used as a unified written language across ancient Roshar, supporting a theory posited by Jasnah Kholin in Relic and Monument. She vehemently disagrees with earlier arguments (including those made by Fiksin) that written Dawnchant texts all originated in a single region. Through her studies, she has also been able to determine that the cataclysmic Desolations caused Dawnchant to fall into disuse. Individual nations began to use the Dawnchant to phonetically record their spoken language, and later developed their own glyphs, abandoning Dawnchant altogether.[1] 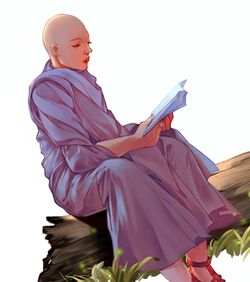 While attempting to read An Accountability of Virtue, Ellista is interrupted by several ardents arguing about the movements of the Everstorm. Hoping for some peace and quiet, she leaves her reading nook in the monastery's library and makes her way to a reading desk in a nearby hallway. Unfortunately, she is again interrupted by discussion of the new storm and is forced to move. After having no luck in the lower buildings, Ellista ventures into the forest where she was at last alone, and could read uninterrupted.[1]

In the forest, Ellista is soon found by another ardent at the monastery named Urv who hoped to check on her progress with the Dawnchant translation. Much to her dismay, Urv does not leave after she hands over her notes, instead settling down nearby to review her translations. Ellista gives Urv a synopsis of her research on the Dawnchant, and he is suitably impressed. While they talk, Urv notices that Ellista is sitting on her copy of An Accountability of Virtue in an unsuccessful attempt to hide it. Urv comments that he has read the book himself, and offers to lend Ellista the sequel in exchange for her help translating the Covad Fragment. He claims that he is working on the fragment at the request of an unnamed patron.[1]

This page is complete!
This page contains all the knowledge we have on the subject at this time.
Big Smooth (talk) 14:40, 23 May 2019 (MST)
Retrieved from "https://coppermind.net/wiki/Ellista?&oldid=144701"
Categories: