Urv is a Siln ardent at Jokasha Monastery in Jah Keved on Roshar.[1]

Urv is young, tall, and gangly. Ellista describes him as obnoxiously loud, but he has shown the ability to remain quiet when he chooses. He enjoys Alethi epics and has read both An Accountability of Virtue and its sequel, surprising Ellista. He appears to have a mischievous streak, intentionally provoking Ellista regarding the book.[1]

Urv follows the Vorin faith. He is a well-read, knowledgeable, and competent scholar, although he is not quite as ingenious as Ellista.[1] 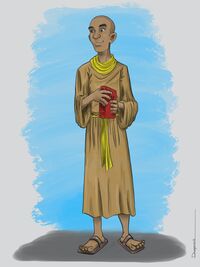 After Navani Kholin released information about the Dawnchant, Urv was one of several ardents at Jokasha Monastery who worked on translating Bendthel's collection of Dawnchant works, although he made less progress than Ellista. He had also gotten stuck working on the Covad Fragment, but reviewing Ellista's work helped him realize that not all literature that appeared to be written in Dawnchant had actually originated in that language. Because Dawnchant was the codified written language across Roshar for many centuries, there was a period of time where people continued to use Dawnchant characters to phonetically transcribe other spoken languages, rather than switch to a different writing system.[1]

He offered to lend Ellista the sequel to An Accountability of Virtue in exchange for her help translating a section of Dawnchant for a very demanding unnamed patron.[1] The assignment was likely the translation of the Eila Stele in order to aid with Taravangian's plotting.[2]

This page is complete!
This page contains all the knowledge we have on the subject at this time.
Big Smooth (talk) 18:22, 18 January 2022 (UTC)
Retrieved from "https://coppermind.net/wiki/Urv?&oldid=160289"
Categories: