“The Honor Chasm, the bridgemen called it, for it was the place where they could make the one decision left to them. The honorable decision. Death. ”

—Kaladin's thoughts on the chasm.[1]

Honor Chasm is a chasm in the Shattered Plains on Roshar. It begins narrow but becomes wider and deeper as it runs east. The edge of the chasm is down an incline. Six ladders are set up to allow bridgemen to go down into the chasms.[1]

It is the only place that Sadeas' bridge crews are allowed to visit unsupervised. The bridgemen use it to commit suicide. Gaz prefers that the bridgemen leave their sandals and vest behind if they choose to go to the Honor Chasm so he will not have to send someone down to fetch the clothing.[1] 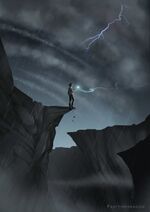 by Jessi Ochse
Kaladin and Syl before the Honor Chasm
For more images, see /Gallery.

Kaladin made a trip to the chasm, meaning to jump from it, but was distracted by the return of Syl. She convinces him to try one more time and not give up yet and he returned to the camp with renewed purpose.[1]

The night before Kaladin joined Bridge Four its bridgeleader had tossed himself over the chasm.[2]

This page is probably complete!
This page contains most of the knowledge we have on the subject at this time.
It has yet to be reviewed.
Retrieved from "https://coppermind.net/wiki/?title=Honor_Chasm&oldid=159452"
Categories: