Luthadel was the capital city of the Final Empire on Scadrial.

Luthadel was also unique in the Final Empire in that it was the only city allowed to have a city wall. While a few other cities had natural fortifications (Fadrex City, for example, was surrounded by rocky outcroppings that acted as a natural barrier against attack), the Lord Ruler only allowed man made fortifications around his city.[1] Interestingly, this wall seems to have acted more as a status symbol than actual defense, since the 8 gates were spaced roughly equidistant around the perimeter, and the height of the wall was not sufficient to prevent koloss from scaling the wall once enough of their bodies lay at its base.[2]

Like all major cities in the Final Empire, Luthadel was built near a number of mines, thus hampering the ability of Ruin to monitor the establishment of the Lord Ruler's stockpiles.[3]

Luthadel also sits next to a lake bearing the name of Lake Luthadel.[4] 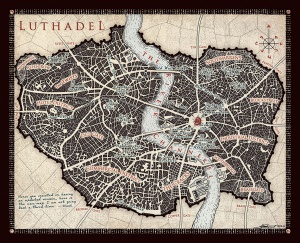 by Isaac Stewart
Map of Luthadel 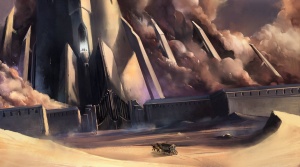 by Kelly Mai
The Pewter Gate

There is significant evidence to the fact that Luthadel was not perfectly planned from the beginning, from the unique, piecemeal construction of Kredik Shaw to the presence of the "Old Gate" district. Interestingly, there is no mention of old city walls being built around (Jerusalem is a classical example of a city outgrowing its wall, and subsequently building out). Whether this is due to a relatively late entrance of the city wall, or if the Lord Ruler merely mandated tearing down old sections when new walls were added is unknown. Given the relative abundance of skaa manpower, either option is possible.

There were no recorded attacks on Luthadel during the Lord Ruler's tenure there. Whether there actually were any attacks is unknown, given the Lord Ruler's tendency to hide the shortcomings of his rule. The only known assault of the city occurred approximately one year after the Lord Ruler's death. At the time, the city was ruled by Elend Venture, in his capacity as King of the Central Dominance. Luthadel was besieged by three armies simultaneously, including one army of koloss.[6] The siege culminated with the koloss army attacking, representing the only time that the walls of Luthadel were successfully breached by an opposing army.

Following Lord Penrod's installation as a subject king under Emperor Venture, Luthadel experienced a brief period of relative stability and prosperity. This period ended when Marsh, the head Steel Inquisitor, implanted a hemalurgic spike into Lord Penrod. Between the whisperings of Ruin and the increasing disasters, Lord Penrod was unable to effectively maintain order in Luthadel. Eventually, Lord Penrod realized the extent of the problems, and ordered the evacuation of Luthadel to the nearby Pits of Hathsin, where the Terris people had established themselves.

Luthadel was subsequently destroyed by a combination of volcanic activity and extreme fires when Vin gained the power of Preservation. The last remnants of the city, except for a portion of Kredik Shaw which was forced underground,[7] were erased during the remaking of the world that followed.

In the Final Empire, Luthadel was the seat of not only the Lord Ruler, but also the most powerful noble houses. The mark of a "Great House" was the ability to maintain a keep in Luthadel. At the time of the events in Mistborn, 10 such keeps existed. Whether this number was established by the Lord Ruler, or arose naturally, is unclear. It is clear, however, that these keeps frequently changed hands, due both to the tremendous taxes levied by the Lord Ruler against the Great Houses, and the general unrest that the Lord Ruler fostered.

Before Kelsier escaped the Pits of Hathsin, House standings were relatively stable, and had been for some time. In order of standing, the ten Great Houses were these:[8]

Following the death of the Lord Ruler, all of the members of the Great Houses fled Luthadel, with the exception of Elend Venture, who established a new government, a constitutional monarchy. The King held the executive power, as well as commanding the armies and having power of treaties. The 24-man parliament (which initially included Elend, even though he was also King), acted as a legislative branch, and had the power to invoke a no-confidence clause to depose the sitting king. This clause was successfully invoked during the siege of Luthadel, when Lord Penrod was elected as king in place of Elend Venture.

This article is still missing information. Please help The Coppermind by expanding it.
This page has been claimed by User: Thurin since April 2019,
please coordinate with them before embarking on significant changes
Retrieved from "https://coppermind.net/wiki/Luthadel?&oldid=129909#The_Twists"
Categories: