Mare is a Tineye[1] on Scadrial. She is Kelsier's wife and a member of his crew. She is fascinated by pre-Ascension times, following the pre-Ascension religion of Larstaism[2] and collecting artifacts from that era, including a picture of a flower. She is also active in the skaa rebellion. She and Kelsier are captured by the Lord Ruler when they try to infiltrate Kredik Shaw, and sent to the Pits of Hathsin. She is later killed there. After her death, Kelsier dedicates his life toward making a world where flowers grow again, the world she had always dreamed of. 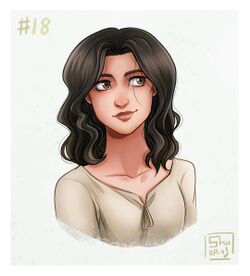 Mare has dark hair and a stubborn personality.[3] Kelsier describes her as having had 'a hidden streak of unconventionality'.[4]

Mare is a tineye, meaning she can burn tin to enhance her senses.

Mare is a competent thief, working with Kelsier and Dockson as well as other thieves.[1] She is also very skilled at impersonating a noblewoman.[4]

Mare was drawn to the Skaa underground because of both her status as a skaa Misting and her interest in pre-Ascension times. This was how she met Kelsier.[3] They got married, although Marsh had also been in love with her.[5] Mare was also friends with Sazed, and introduced him to her husband.[3] 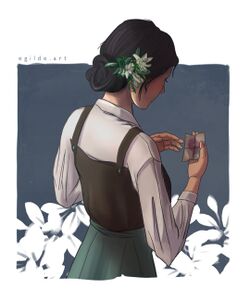 by Egilde Art
With her flower

She wanted children, particularly a daughter whom she could teach to ‘walk the line between noblewoman and thief’.[4] However, Kelsier thought they would be a hindrance and so they had none — something he later regretted.[3]

She expressed disappointment when Kelsier's vigilante actions against nobles would throw their life into upheaval.[6]

When Kelsier heard that the Lord Ruler was hiding something valuable in his secret room,[7] Mare and a Smoker named Redd[8] helped him in his attempt to break into the room. However, they arrived to find Steel Inquisitors outside the secret chamber, waiting for them.[9] They killed Redd immediately.[8]. The Lord Ruler then thanked Mare for betraying Kelsier to him, before the two were separated.[3]

She arrived in the Pits of Hathsin a few weeks after Kelsier. Though he still loved her, Kelsier questioned her loyalty due to the Lord Ruler's words.[3] She died eighteen months later, having sacrificed herself for Kelsier. He had been unable to find an atium geode, without which he would have been killed by the taskmasters. Mare convinced him to take hers, lying that she had found two that week. When it was revealed that she had none, the taskmasters beat her to death. This event is what caused Kelsier to Snap.[10]

It was generally believed that Mare was the one who betrayed Kelsier, until Vin realized that the Lord Ruler and his Inquisitors were able to pierce copperclouds. She and Kelsier concluded that they sensed Mare’s use of allomancy on that night. This was how they were caught, proving that Mare hadn't betrayed Kelsier after all.[8]

Kelsier asks Preservation if she went to the Beyond and the god seems unable to reply.[6] There is no cognitive shadow of Mare hanging around.[11]

This page is probably complete!
This page contains most of the knowledge we have on the subject at this time.
It has yet to be reviewed.
Retrieved from "https://coppermind.net/wiki/Mare?&oldid=160764"
Categories: