This page or section needs to be updated with new information for Starsight!
Be aware that in its current state, it may not include all additional content yet.

“You can swear at me all you want, threaten me, whatever. So long as you fly like you did yesterday, protecting the others, I want you on my team. ”

Jorgen Weight, callsign Jerkface, is a pilot in the Defiant Defense Force and Skyward Flight's flight leader. After graduating flight school, he initially joins Riptide Flight before taking back the flight leader role when Skyward Flight is reformed. 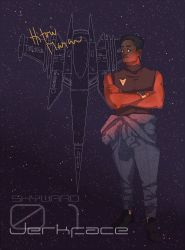 “We are supposed to be watching for signs of Krell, not engaging in juvenile initiation rituals. I expected better of you men and women.”

—Jorgen to the Nightmare flight when they tried the initiation pranks.[2]

Jorgen is tall, has brown skin and short curly hair, and according to Spensa, looks "distinctive in a kind of baby-faced, pretty-boy way."[3] He has eyes that are deep brown with hints of light gray at the centers.[4]

He is smart and has prepared for military all his life and is very diligent and hard working for it.[5] Jorgen is still learning how to become a natural leader but does care for his team and doing the right thing.[6]

He feels trapped with the life choices that have been drawn for him by his family and is so responsible he will follow them even if it is not what he personally wants.[2]

Jorgen is a very good pilot. Not only because he has trained since being fourteen, but because he does like it and is very diligent on his training. He proves himself since their first flight at school.[7]

He is also savvy in battle, and thinks through the moves before acting. He doesn’t have a problem saying what he thinks for the course of battle,[7] but will do as commanded.[8]

He is able to keep calm and assess situations even under very tense battles, he does care and try to push his team to victory and safety.[9]

He has studied the Krell and is curious and concerned on the military strategy of both sides.[10]

Jorgen is the son of the Jeshua Weight, a hero of the Battle of Alta. She flew seven years in the DDF, and has over a hundred confirmed kills. Her husband is Algernon Weight, National Assembly Leader and high foreman of Detritus' largest intercavern shipping company. They’re among the most heavily merited people in the lower caverns.[3]

Jorgen’s family owns three private fighters, and he has been training on them since he was fourteen. He has nearly a thousand hours in the cockpit. Because of this, not only did he have direct pass to Flight School, but he was made flightleader.[3]

Since the first day, Jorgen takes their training very seriously and tries to bully the team around to follow his orders. It was not well received by the team and brings Spensa to a defensive aggressive attitude. She gives him the Callsign of “Jerkface” which gets traction with the rest of the team.[7] During his first days and battles he leads the team with a cool head, however is very frustrated with the lack of respect he gets from his team, especially Spensa, and refuses to use the Callsign of Jerkface.[11] He tries to comfort the team by giving a speech after Bim and Morningtide died, which was not a very good one and probably taken off a book.[12]

After that battle, Spensa finds him going over and over through the simulation of that battle, where he tries several times to save Morningtide.[5] He also continues to give advice to all his flight, even if they don’t always take it the right way.[13]

In a later flight, Spensa's flightmate, Hurl, dies. She crashes because she was unwilling to eject. Spensa announces she will give her a proper pilot’s burial and is followed by Jorgen who takes her in his hover-car. He brought the materials for a funeral pyre. They recovered Hurl's pin to give to her parents and burned Hurl's body. He also helped Spensa with taking the booster for her ship. Spin tells the rest of the crew about what they did for Hurl and Jorgen was better respected after that.[2]

As their flight numbers lower, with the departure of Arturo, Nedd and Kimmalyn, they are asked to join with other flights. This is the first time he has to use his callsign of Jerkface. After the other crews try to call him for being “smug”, he gets the support from both FM and Spin who calls him a great flightleader.[14] Only Jorgen and FM from Skyward flight graduated. After a very short graduation, they were sent with the rest of the pilots to secure a falling shipyard which, if rescued, could give enough parts to build a winning fleet. This however was a trap and not only were they outnumbered in battle, but the city of Alta and Igneous Cavern were unprotected, targeted for destruction.[14]

He tried to return on time to save Spensa but he was too far away. He managed to survive the fight and is now full pilot of Alta.[14]

After discussing his cytonic abilities with Spensa's Gran-Gran, Jorgan travels below the deep caverns with Nedd Strong and Arturo Mendez, as he hears a faint music from them with his cytonic senses. After searching for several days, he finds a hidden cavern full of taynix.[15] 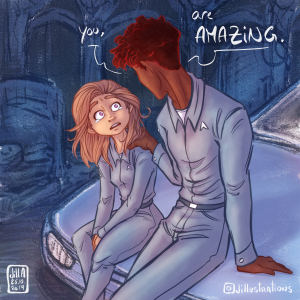 Jorgen was so eager to get the respect from his crew that he bullied the team around on the first days. Spensa on the other hand resented him for having it “easy”. As a result, there was constant rivalry between them in the beginning. Spensa was responsible for Jorgen’s Callsign: Jerkface which frustrates him.[7]

During a “game” ran by Cobb in the simulation, Jorgen’s better flying techniques and strategy was about to earn him a win; however Spensa, who was up in the mark at that moment, crashed herself into him winning the game. He was so frustrated with her, he revealed to Skyward Flight that Spensa was the daughter of Chaser; this alienated her from other members and provoked Spensa to steal the power source of Jorgen's hover car.[16]

Spensa continues to challenge Jorgen’s authority and disobeys a direct order of formation. He calls in again on her father’s heritage and she assaults him badly; though he complains about her insubordination again, he doesn’t attack her.[17] Convinced that he would call on her, she goes to the Admiral’s office requesting disciplinary actions from her. Jorgen was there and prevented it from happening, letting her know his flight needed every pilot.[6] After that she becomes more sensible and even ashamed of the treatment he was getting as she knew it was partially her fault.[18]

After Hurl’s death, they give her a proper funeral together and started being friendly to each other. He even helped her with taking the booster to where she asked. He figured out she was building her Poco and encouraged her to be free and defiant.[18]

When Spensa finds out about what really happened in the battle of Alta, the only person she opens to is Jorgen. She asks him not to fix but listen. He is able to comfort her.[4]

After Alanik crash lands on Detritus, Spensa asks Jorgen to "talk her out of doing something incredibly stupid," namely impersonating Alanik and infiltrating Starsight. He then proceeds to to walk her through the logistical requirements of her plan, before telling her to go and telling her he "trust her instincts," which makes Spensa jump up and kiss him. He remarkably kisses her back.[19]

After she is gone, he constantly thinks about Spensa and waits for Alanik to wake up so that he can ask her where Spensa went so that he can go and find her.[20]

This article is still missing information. Please help The Coppermind by expanding it.
Retrieved from "https://coppermind.net/wiki/?title=Jorgen_Weight&oldid=151096"
Categories: