This page or section needs to be updated with new information for ReDawn and Cytonic!
Be aware that in its current state, it may not include all additional content yet.

The Superiority is an interstellar, multi-species nation that has come to rule over most of the known universe after the Third Human War.[2] They do so through control over faster-than-light travel and communication.[3]

“There were no Krell at the start of [the war]. Just us versus the galaxy. And humankind lost. ”

While the Superiority is not a very old political body, its origins can be traced back to the days of the early contact between humans and aliens. Humanity, through the Phone Company, interacted with the Interspecies Monitoring Coalition, an alliance of aliens led by varvax and the tenasi. The IMC divided species based on their level of intelligence. Back then, there were several ranks, from Primary to Quaternary.[5]

The Superiority itself would only come to be late in the human wars, as a response to human aggression. Initially a loose coalition, they defeated humans in the Third War and demanded that all their worlds and ships, whether military or civillian, surrender to their authority. When humans refused, Superiority sent out the nascent KRELL to isolate and suppress them.[4] At the same time, they also took measures to keep the nature of their faster-than-light technology secret.[6]

Over the next century, Superiority grew to be the most powerful force in the galaxy, largely thanks to their control over the FTL tech. Throughout the decades, the secret was nearly leaked multiple times.[6] Most notable of them was the attempt made by kitsen, who had simultaneously stolen three Superiority vessels in an attempt to capture at least one hyperdrive. This ended in failure, however, and has led to the kitsen's Superiority citizenship being revoked.[7]

About a hundred years after the Third War, the Department of Protective Services created a weapon they believed capable of controlling delvers, turning them from a threat into a weapon.[8] Marketing it as a permanent solution to the ever-present threat, the department created the Delver Resistance Project, aiming to train fighter pilots to get within a delver's heart and activate the weapon. Unbeknownst to them, Spensa, a human from the Detritus preserve, snuck into the program, aiming to steal both the weapon and the Superiority hyperdrive.[3]

While Spensa was successful, the Department of Protective Services did end up unleashing a delver, which quickly turned its attention to Starsight, Superiority's regional capital.[9] Spensa, with the assistance of Superiority pilots Vapor and Morriumur, managed to banish the delver back into nowhere.[10] As a result, the Department of Species Integration opened a diplomatic channel with Detritus, with the Minister of Species Integration, Cuna, negotiating peace with the Detritus admiral Cobb.[11]

This was not meant to be, however, as Protective Services used their human operative, Brade, to fake the assassination of Cuna and reignite Superiority's fears of humanity, seemingly destroying the buddying peace.[12] 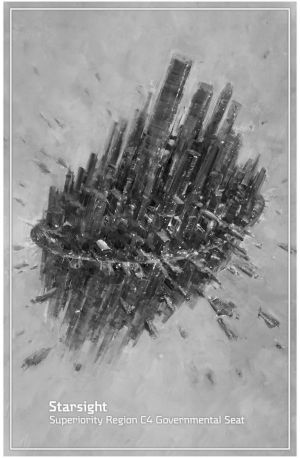 by Isaac Stewart
Starsight, one of the Superiority's regional governments

The Superiority is some form of a federation or republic. It's divided into regions, containing a number of worlds and space stations. Each region is designated by a letter and a number, and each has a local government responsible for maintaining the affairs there; one such local government is Starsight station, responsible for region C4.[13][14] It's unknown whether they have some sort of capital world.[15]

The leader of the Superiority holds the title of the High Minister; the current High Minister is Ved. Beneath the High Minister is a number of Ministers, each of whom controls one of the departments of Superiority.[16] Each department is responsible for a particular facet of Superiority's existence; the precise number of departments is unknown. There is also the senate, which is responsible for assessing and passing or vetoing new laws and legislation. While local sub-governments can exile people for various actions with virtually no oversight, the senate regulates any more impactful activities, like shutting down news networks.[16] The Ministers seem to be members of the senate, though it's likely it's comprised of more than just them.[17]

“They are primarily tasked with resolving external threats to the Superiority. ”

Led by Ohz Burtim Winzik, the Department of Protective Services is responsible for keeping the peace throughout Superiority.[16] Their main duty is to isolate and control any aggressive species, chief among them humanity. They do so by maintaining observation posts and space stations above the affected worlds, and by launching offensive strikes to keep their prisoners under containment.[3] They seem to be the military arm of the Superiority, and command the KRELL.[12]

Apart from raw force, the Department of Protective Services employs a number of more subtle measures, including a hefty propaganda machine. Silencing internal discord within the Superiority seems to be part of their responsibilities; for this reason, they employ suppressors, meant to censor the news or turn the news cycle against any dissenters.[18] They're also known for stoking up public fears of humanity whenever they feel the need to attain greater funding from the government.[19]

“Personally I believe there is a home for many different types of species in the Superiority. ”

Led by Cuna, the Department of Species Integration is tasked with inducting new species into Superiority, as well as advancing species from secondary to full citizenship.[12][3] They also seem to be responsible for maintaining diplomatic relations with other nations.[20][11]

The Superiority is comprised of a multitude of species, divided roughly into three castes - secondary citizens, full citizens and Superiority leaders. A species can attain full citizenship by complying with a number of rules set out by the government. Among them is primary intelligence; a species is considered of primary intelligence if they have created a peaceful society, in which crime is almost non-existent.[21] There are also other conditions, such as creating a functioning species-wide government and converting to democracy.[3][15]

Regardless of the number of full citizens, only five species are considered Superiority leaders and thus, only they can become government officials: varvax, tenasi, dione, heklo and cambric.[22]

“The Superiority governs not through force of might, but through technological enlightenment. ”

The Superiority does not rule over every single species in the known universe; however, it does exert indirect power over most. This is thanks to their control over delver-safe FTL technology. While all species can occasionally produce a cytonic capable of teleportation, large-scale interstellar travel and communication can all be done only through Superiority's ships and channels.[3] Their method of doing so -- using taynix to distract the delvers during a jump -- has been kept secret by Superiority ever since the human wars, and various methods have been put in place to ensure that the word never got out, including extensive propaganda campaign to scare people away from investigating the taynix.[6]

As a result, the Superiority doesn't possess much in the way of the military, with KRELL, dedicated to containing humans in their preserves, being their largest fighting force. If they want to pressure any species, or feel threatened by them, all the Superiority needs to do is cut them off from access to the FTL network.[3]

“If a species gets rowdy or dangerous, we can just leave them to themselves. It's not so bad. We don’t owe them our technology, particularly if they’re not going to be peaceful. ”

Superiority promotes peace and nonaggression among its members, to the point of peacefulness being one of the deciding factors in whether or not a species can join them.[21] Displays of anger are frowned upon, and violence against is usually seen as the last resort. Often, this leads the species of primary intelligence to view others with patronizing condescension.[24] This attitude sometimes makes Superiority's official communiques come across as cutesy or infantile, even when talking about serious matters.[25]

The beings of non-primary intelligence are often referred to, half-seriously and half-mockingly, as lesser species. Leaders and lesser species are not ordinarily supposed to mingle, and an attempt to bridge this gap is commonly viewed with suspicion.[26] Moreover, much of Superiority's culture is based around fear and hatred of humanity, and it seems that the usual taboo against aggression is suspended when speaking of humans.[16]

On the other hand, Superiority does provide safety and prosperity to its members. Their living spaces are rich and well-furnished, with many parks and creative artwork, and citizens walk the streets without fear of crime or attack.[23] Information is, by and large, freely available, even on topics such as humanity.[27] People can and do occasionally protest, and news broadcast are legally protected from censorship.[28][16] This being said, some departments influence media through propaganda and engineered "leaks" to sway public opinion, and the undesirables often vanish, tossed into the nowhere as punishment.[6] Freedom of information is also non-complete, as public data-nets can contain lies intended to keep the population under control.[29]

This article is still missing information. Please help The Coppermind by expanding it.
Retrieved from "https://coppermind.net/wiki/Superiority?&oldid=161773"
Categories: