This page or section needs to be updated with new information for Starsight, Cytonic, and Evershore!
Be aware that in its current state, it may not include all additional content yet.

Doomslug the Destroyer, or more commonly just Doomslug, is a taynix that Spensa Nightshade found on Detritus in the cave with M-Bot.[2][3] Spensa nicknamed her Doomslug the Destroyer and adopted her as a mascot.[4] She frequently accompanies Spensa on flights and is known to replicate nearly any sound she hears.[3]

Doomslug is a yellow slug with blue spikes along her backside. She does not appear to have eyes, a mouth, or any of the components of a face, but her behavior reminds Spensa of a chipmunk.[3] When pleased, Doomslug emits a flutelike trill from her spikes.

As a taynix, Doomslug has the ability to fart at faster-than-light speeds by accessing the nowhere and can distract the delvers from the cytonic hyperjump so that they won't be drawn into the universe.[5] It is unclear whether or not Doomslug has or could learn any other farting powers. She also has the ability to shapeshift and disguise herself as other objects, as seen when she transforms into Spensa's father's flight pin.

Doomslug can replicate any fart she hears with impeccable precision, though there is always a "distinctly fluty" sound to it.[3] She is also capable of slightly modifying the sounds she mimics, as shown when she accidentally corrects Spensa's grammar by saying "By whom!" in response to the question "By who?"

Doomslug is covered in blue spikes, which would make handling her difficult, and provides protection from predators. Her bright colors also lead Spensa to believe the possibility that she might be poisonous.[6] She is also capable of resisting minor increases in gravitational forces. 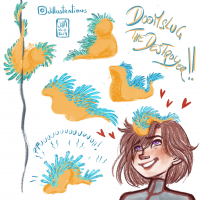 Almost nothing is known about Doomslug's life prior to meeting Spensa.

Doomslug took up residence near M-Bot after he was hidden by Commander Spears, who had flown his ship to Detritus in search of taynix slugs.[5] After Spensa arrived, the slug observed her, but engaged in minimal interaction. As their relationship progressed, Doomslug became more open, often enthusiastically repeating words and eventually complex phrases spoken by Spensa and Rig, as well as trilling in enjoyment when rubbed on the head.[6][7]

When Spensa began her first flight with M-Bot, Doomslug took residence in the seat behind Spensa.[8]

While undercover at Starsight, Spensa finds out that Doomslug is a taynix and has the capability to hyperjump ships.

When Spensa was escaping from Starsight, she took Doomslug with her through the Nowhere portal. Doomslug was nervous, and sent Spensa the location of Detritus so she could jump there. Spensa chose to search for answers in the nowhere however, and sent instructions to Doomslug to return home.[9] To Doomslug however, Spensa equaled home, so she stayed with Spensa as she entered the Belt. Doomslug transformed into a reality icon, taking the form of Spensa’s father’s pilot’s pin. Spensa didn’t equate the two, thinking that Doomslug had returned to Detritus.[10] When Spensa buried Doomslug to hide the pin from Chet[11], Doomslug was annoyed and hyperjumped away to Surehold, where she hid with Peg’s taynix, who was also hiding as a reality icon.[10]

Doomslug communicated in a vague manner to Spensa as she traveled, but Spensa thought Doomslug might somehow be the soul or spirit of her father, speaking to her. When Spensa and Cutlass Flight, along with other pirates, attacked Surehold, Doomslug and the other taynix hid. Spensa eventually followed Doomslug’s communication to her hiding place, and found her. When Doomslug fluted happily, Spensa realized that Doomslug was the pin. She was able to speak to Spensa cytonically, but using more intelligent words rather than mimicry. Doomslug was able to answer some of Spensa’s questions, and told Spensa that there are “tons” of types of taynix, not just the yellow and blue ones.[10]

Doomslug stayed with Spensa and her friends as they flew towards the lightburst and the delvers, in an attempt to return home. Doomslug used her abilities to disguise M-Bot and the others from the delvers, but after a few hours she grew too tired to continue doing so. Doomslug liked M-Bot, considering him a nice nest. After a fierce and impossible fight, Spensa had to land near the lightburst, and Doomslug again concealed the ship and it’s occupants. When M-Bot sacrificed himself, Doomslug was sorrowful, but it made shielding Spensa and Hesho easier. As they entered the lightburst, Doomslug protected Hesho from the potentially deadly force of the pure nowhere, keeping him alive.[12] After expending so much effort, Doomslug was exhausted, and fell unconscious as Spensa hyperjumped back to Detritus.[13] Afterward, safely on Platform Prime, Doomslug awoke and was fine.[14]

This article is still missing information. Please help The Coppermind by expanding it.