This page or section needs to be updated with new information for Starsight and Evershore!
Be aware that in its current state, it may not include all additional content yet.

“They seemed to be a powerful spacefaring race that had shown bravery and loyalty in combat. But . . . scud, they were also really cute. ”

—Spensa to herself upon seeing the kitsen[1]

The kitsen are a race of aliens that have secondary citizenship within the Superiority empire. Until recently they had a hereditary monarchy and were ruled by King (now Captain) Hesho.[2]

The kitsen are about one handspan tall. They have bushy white tails and long, pointed ears. Although they look like a cross between gerbils and foxes, they walk upright on two legs.[3] 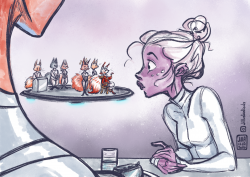 by Jill Andersen
Spensa talking with some kitsen

The kitsen made first contact with humans in East Asia thousands of years before the Human Wars, before either species had gone through the industrial revolution. Kitsen cytonics teleported to Earth, leading to interactions and trade between the two cultures. The kitsen people did not trust their cytonics, and an intense disagreement ensued. The details of the disagreement are not clear, since records from that time are potentially untrustworthy and scarce. It is known, however, that humans were somehow involved and there was a war was implied. The kitsen cytonics left, and the main population was stranded on their homeworld.[4]

As a result of their centuries-long history of monarchy, the kitsen are in the habit of showing great deference to Hesho despite having transitioned to a democratic society. Even though he claims to no longer be royalty[3] -- and appears to be genuinely trying to live up to that claim[5] -- he is still treated quite specially: he has an entourage of other kitsen who feed him,[1] fan him,[6], and drive him around,[4] and the senators of his government are at a complete loss for what to do apart from what they think he wants.[5]

They also appear to have a somewhat militaristic culture. Hesho agrees enthusiastically when Spensa describes him as a warrior poet[4] and Hesho's great-great-great-grandfather (who was presumably royalty) led the kitsen armies himself with a sword to fight the human invasion. Their culture is related to that of feudal Japan; their nation had had, around the time of Hesho's ancestor, a rank of "daimyo" and a notion of separate clans within the nation.[5] Kitsen, at least those in the government, also often wear formal-looking silk clothing,[3][1][5] most likely inspired by or the inspiration for kimono.

This article is still missing information. Please help The Coppermind by expanding it.
Retrieved from "https://coppermind.net/wiki/Kitsen?&oldid=164696"
Categories: