This page or section contains spoilers for Cytonic!
This information has the ability to potentially ruin elements of the plot for the reader. Proceed with caution if you have not read this book.
This page or section needs to be updated with new information for Cytonic!
Be aware that in its current state, it may not include all additional content yet.

“When this is done, Jerkface, I will hold your tarnished and melted pin up as my trophy as your smoldering ship marks your pyre, and the final resting place of your crushed and broken corpse! ”

Spensa Nightshade, callsign Spin, is a Defiant Defense Force pilot from Detritus, the daughter of Zeen Nightshade, and a cytonic. 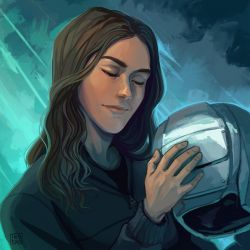 As the daughter of "The Coward of Alta", Spensa was looked down upon by her fellow Defiants. As a result, she acted fiercely when confronted by others and used intimidation as a defense mechanism. Spensa would often lash out at people who threatened her and even those who didn't, using a wide and somewhat graphic vocabulary inspired by stories of glorious heroes from Earth that her grandmother told her. She was certain that her father was not a coward like everyone thought, and she was bent on proving it by seeming as 'brave' as possible. However, she believed that bravery was about being the most daring warrior and to never show fear. She thought that anything less would make her a coward and prove that the DDF had been right about her father.

In her time in Flight School, she came to realize that being brave wasn't as simple as she thought. People she respected, like Cobb, were guilty of doing things that she would consider cowardly if she did them herself.[9][10] As she loses flightmates to the Krell, she realizes that true bravery isn't just about sounding heroic and what other people think. Instead, bravery is about her own confidence in herself and knowing that, no matter what anyone else said, she was not a coward.[11][12] She becomes embarrassed by how she acted before and realizes that it's okay to get scared sometimes.

Spensa is an excellent pilot[13] and also has cytonic abilities. So far, she has demonstrated the ability to intercept the Krell's faster-than-light communications with their drones and to react to those orders faster than would be humanly possible.[14] On one occasion, she was also able to activate M-Bot's cytonic hyperdrive.[15]

Spensa lived in the Glorious Rises of Industry with her mother and grandmother, who she referred to as Gran-Gran.[4] Gran-Gran's mother was the "engines" of Defiant, enabling its faster-than-light travel.[11]

Spensa went to school and did reasonably well, but occasionally skipped classes to go exploring or hunting. She skipped class on the last day of school when a sanitation worker was giving a presentation. She accidentally found an old ship in a cavern, seemingly high tech and unfamiliar in appearance. She was told she could take the pilots exam, and was confident in her knowledge. To her horror, she found her pilots test to be all questions about city sanitation. she failed the test, having skipped class that day.[16] She sat in the exam room for hours, then picked up a blank regular test and filled it out. Cobb, her father’s old wingmate and a First Citizen, entered the room and looked over her test. He asked her some questions, and told her to show up at flight school the next day.[17]

Spensa went to Flight School the next day, befriending a girl named Kimmalyn.[16] The training room had several flight simulators, and Spensa met the rest of her flight. She instantly disliked Jorgen, who is rich and priveleged. Cobb made Jorgen flight leader, which outraged Spensa.[18] The cadets spent hours practicing takeoff and landing in the simulators, and afterward an alarm went off. They were called to head towards the battle because Nightmare Flight was down in the caverns. They weren’t supposed to engage in combat, just hover near the city and look threatening. But when a Krell ship went towards the city they engaged. Kimmalyn managed to snipe the Krell fighter and destroy it, and Skyward Flight went back to the surface.[19]

Admiral Ironside despised Spensa and thought her to be a coward like her father, and forbade her from sleeping or eating at the Flight School. Spensa was forced to sleep in her cave with the broken ship, and to make the long commute between there and the Flight School. Because she was forbidden to eat at the Flight School, Spensa was forced to hunt for rats and mushrooms in the caves to feed herself. Still, she didn’t complain, knowing that Admiral Ironsides would take any chance to see her ejected. She tried to connect power to the ship, but her light line’s power matrix was too weak.[20] When she arrived at flight school the next day, she found that her friend Rig was quitting.[21] Spensa and the other cadets spent hours upon hours practicing maneuvers before letting them try destructors, as well as teaching them to use light-lances. Spensa also discovered that her helmet contains sensors to monitor her bioreadings. They engaged in a competition with their light-lances organized by Cobb, in which Spensa and Jorgen competed fiercely. They grew angry at each other after Jorgen revealed that Spensa’s father is Chaser, the infamous coward. At the end of the day, Spensa stole the power matrix from Jorgen’s hovercar.[22]

This article is still missing information. Please help The Coppermind by expanding it.
Retrieved from "https://coppermind.net/wiki/?title=Spensa_Nightshade&oldid=158204"
Categories: