This page or section needs to be updated with new information for Cytonic and Evershore!
Be aware that in its current state, it may not include all additional content yet.

The taynix are a species of slugs with cytonic abilities.[1]

Taynix are somewhat blobby, and about the size of a loaf of bread, but flatter.[2] The hyperslugs have bright yellow skin and small, blue, somewhat stiff spines along their backs, though there may be coloration differences between individuals. The boomslugs are similar, but have red skin, black spines, and black stripes. The commslugs are purple with orange spines.[3][4] Another slug with the ability to inhibit cytonics is blue with lime green markings.[5] They are not slimy to the touch, feeling tough like leather, but with a soft, springy consistency.[6][7] While they do not have eyes or any components of a face, they can still perceive their environment, probably through sound and scent, or possibly cytonically.[8]

Taynix are able to make fluting and trilling noises with their spines[2][9] using different tones, and sometimes do so to express emotion.[6][10] They are capable of recreating a wide variety of sounds, as they often parrot words said to them, as well as other sounds like grunts, groans, and whistles.[11][12][9] They are of above animal intelligence,[13] and Doomslug occasionally corrects Spensa's grammar.[10] Taynix can also give off a cytonically detectable sound that is similar to soft music. This sound, while only perceptible to cytonics, can be used to find out their location over long distances.[14]

Taynix can move by crawling,[2] though hyperslugs can teleport to get around. Taynix are able to handle heavy gravitational forces, responding by going rigid and hunkering down, though they do not seem to enjoy the experience.[6]

According to the Superiority, the taynix are originally from the planet Cambri,[15] though they have since migrated to other planets. They have been found on Detritus and the kitsen homeworld.[14][16] Little is known about their natural living conditions, except that their diet consists mostly of fungi. Consequently, they are often found near such organisms.[1][8]

According to Doomslug, reality ashes are in truth their poop from feasting on the radiation of the nowhere.

Taynix have various different cytonic abilities, with the specific one depending on their species and indicated by their color.

Hyperslugs[4], which are yellow with blue spines, have the innate cytonic ability to travel through the dimension of the delvers. They are used by the Superiority as hyperdrives since they do not risk drawing the delvers into the universe.[1] To do so, a cage containing the taynix is inserted into a Superiority hyperdrive. During a hyperjump, the hyperslug produces a cytonic scream, which distracts the delvers from the passing ship.[17] This scream is apparently only perceptible for beings with cytonic abilities.[18] Cytonics onboard can, intentionally or unintentionally, interfere with the ship's hyperjump process and cause a malfunction, which is usually resolved by replacing the taynix in use with a new one.[7][19] Engineers can be reluctant to swap in a fresh taynix, though, because doing so leads to a lot of paperwork.[20]

Boomslugs[4], which are red and black, have an ability that greatly resembles a mindblade. When thinking of a delver or else threatened, they send out a powerful force in all directions that is capable of injuring humans. Their attack inflicts a score of shallow cuts on whatever is threatening them. They are generally left alone, due to the danger of mishandling one and setting it off.[21] 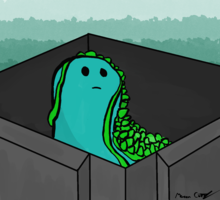 FM found this fourth variety of taynix aboard a Superiority ship on ReDawn. The are used as cytonic inhibitors, enabling them to create a large invisible bubble in which cytonic abilities are prevented from being used. Using one’s abilities within this bubble requires a cytonic key, which is likely only known at first by the one who initially interfaced with the taynix.[5]

Commslugs[4], which are purple and orange, have the ability to communicate cytonically. This communication can be received by traditional technology, however, as Platform Prime was able to receive Cuna's cytonic transmission without needing a commslug.[22][23]

Rig and Jorgen discovered several new types of taynix on Detritus. There are wrinkled grey ones with black and white spines, taynix with spines that faded between different colors of the rainbow, taynix that are blackish that shine with an iridescent blue sheen, and slugs that are smaller than the others, that are teal colored with pink spines. The abilities of these taynix are all unknown.[24]

Prior to the rise of the Superiority, humans were likely aware of the cytonic powers of the taynix; Commander Spears' order to M-Bot to look for mushrooms was likely because he was trying to find a taynix to power his cytonic hyperdrive.[1]

In order to cover up the taynix's role in cytonic hyperdrives and maintain a monopoly over FTL travel across the galaxy, the Superiority claimed the taynix were highly venomous invasive species.[15][1] The Superiority also sent out teams to exterminate taynix that in reality were presumably collecting the taynix in order to power their hyperdrives.[16]

During her exploration of the Detritus caves, Spensa found a taynix which she nicknamed Doomslug and kept as a pet.[2]

Immediately before the invasion of Detritus, Jorgen found a colony of several hundred taynix deep in the caves of Detritus.[14]

This article is still missing information. Please help The Coppermind by expanding it.