The Terris Village, or simply the Village, is a Terris settlement within the city of Elendel in Scadrial. Located in the Fifth Octant, it serves as the center of Terris society and culture within the city.

The Village is in an area of the city where the fertile soil of the Elendel Basin is allowed to thrive untamed, giving the Village a forest-like appearance. [1]

There is an agreement between the Synod and the Elendel government that grants a degree of autonomy to the Terris residents of the Village, allowing the Terris to police themselves without the interference of the local constabulary.[1] 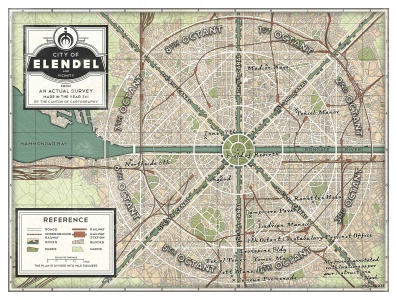 The Village is was likely once an ordinary street, albeit a wide one. However trees sprouted throughout the street itself creating a dense canopy that ran the entire length of the street, all the way through. Though some would potentially call it a park, this would be incorrect. The Village is described as an 'fresh and primal' place, being uncultivated and unmanicured. The ground of the street itself will not allow for carriages or motorcars, as the cobbles are rolling and uneven, creating a 'too-springy' feel to the grass. Due to the bountiful nature of the Elendel Basin and the cover of the trees, the air is said to feel and smell 'soft' in this area.[1]

The trees that grow in The Village have reached such heights and thickness, that they have engulfed the buildings alongside the street.[1] This being the case, there are no notable landmarks at this time. However, there several rustic style thatched log huts throughout the entirety of the Village that contain enormous fire pits used for heating water in kettles. The huts themselves contain furs and ancient-style paintings.[1]

As the Village was originally a regular street in Elendel's 5th Octant, it was likely a standard business district, though very little is known about the street itself prior to the year 342.[expand]

The 'government' of The Village is run by the Synod, a Terris enclave within the city of Elendel. They have an agreement with city officials that they are allowed to police themselves, handling crimes and subsequent punishments without the interference of the Elendel constabulary.[2]

This article is still missing information. Please help The Coppermind by expanding it.
Retrieved from "https://coppermind.net/wiki/?title=The_Village&oldid=170933"
Categories: