Atium is a god metal. An Allomancer burning atium is able to see into the future by a few seconds. Feruchemists can use atium to store youthfulness, and when used as a Hemalurgic spike, atium steals any property or power. The metal is a reflective, silvery color, so much so that beads of atium almost appear to be drops of liquid.[1]

Atium is notable as it is the condensed power of the Shard Ruin. As a result, an Allomancer burning atium does not draw on Preservation's power; instead, the Investiture of the metal provides the power.[2] It was sequestered away at the Pits of Hathsin by Preservation when the latter gave up his mind to trap Ruin.

Presumably, the name "atium" is inherited from Ati, the name of the original holder of the Shard Ruin, just as the name "lerasium" is inherited from Leras, the original holder of the Shard Preservation. Atium cannot be combined with lerasium to make harmonium, nor can harmonium be broken down into atium and lerasium. While it would not be possible to get atium and lerasium from harmonium through distillation or other mundane methods, it may be possible through some other method.[3]

An atium Misting is known as a Seer. Burning atium allows the user to see a few seconds into the future, by producing atium shadows of everything in sight. These shadows perform future actions. Burning atium expands the user's mind to be able to accept and process all of the information, even allowing the Allomancer to dodge incoming attacks from behind. If another Allomancer burning atium is encountered, the atium shadows will split, since each seeing into the other's future means that they can both make different decisions that affect both Allomancers' outcomes. An Allomancer's atium shadow will also split when burning electrum. Harmony speculates that atium makes the Allomancer burning it a more efficient killer because it draws upon Ruin's power.[4]

Burning duralumin with atium will allow Allomancers to see farther into the future, by allowing them to peer into the Spiritual Realm.[5][6][7] Aluminum objects do not generate atium shadows.[8]

An Allomantic atium savant can sense atium shadows even if they are blind.[9]

An atium Compounder would be able to use atium to have a nearly infinite supply of youth, allowing for practical immortality.[10][11]

When used as a Hemalurgic spike, atium is like a wild card. Depending on where it is placed, it can steal any Hemalurgic property and it does so better than other spikes.[12] Atium must be refined to be used properly.[13]

Atium may also be alloyed with any of the other Allomatic metals. However the only currently known atium alloy is malatium, an atium-gold alloy. These alloys grant various expanded mental and temporal effects when burned.[14]

Atium (and its alloys) can be made into weapons, which can be very useful for doing things like resisting Shardblades.[15] 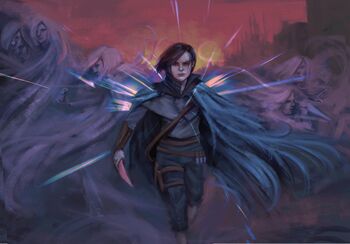 As atium is a god metal, it does not form naturally. The metal only came to exist when Preservation stole a chunk of Ruin's power and created the Pits of Hathsin, where atium grows in crystals, to deny Ruin's access of part of his power. During the Final Empire, atium is classified as one of the two high metals along with gold and was thought to be only accessible to Mistborn. However, atium mistings did exist. Due to the scarcity of atium and the Lord Ruler's intended misleading,[16] such existence was unknown to most people until the exception of Aradan Yomen occurred. The Steel Ministry sometimes blend atium into food during a ball, to find out hidden atium mistings.[17] These people can be used to make Steel Inquisitors or put to other usages.[18]

Actually, the atium mistings are not natural. Supposedly, there are only sixteen kinds of Mistings, one for each kind of basic metal. But Preservation altered this as a part of his plan to defeat Ruin. The atium Mistings serve as a way to burn away Ruin's power without being affected so much by the destructive intent. Also, when the mists started to snap people, one sixteenth of them became Mistfallen, whom were later found out to be atium mistings.

After the Catacendre, Sazed changed the Allomantic table back to normal and atium Mistings no longer exist.[citation needed]

After the Catacendre, it is possible that atium still grows somewhere, but nothing is known about it.[citation needed]

This article is still missing information. Please help The Coppermind by expanding it.
Retrieved from "https://coppermind.net/wiki/Atium?&oldid=132566"
Categories: