Dark One Book 1 is the first book in a series of graphic novel written by Brandon Sanderson and adapted into its format by Jackson Lanzing and Collin Kelly, with artwork by Nathan Gooden and Kurt Michael Russell.[1] The story takes places both on Earth and in an alternate world called Mirandus, with the two worlds influencing each other, even though only some in each are aware of the other. Though the protagonist, Paul Tanasin, is from Earth, there are prophecies of him in Mirandus -- prophecies claiming that he will be their destroyer, the Dark One. 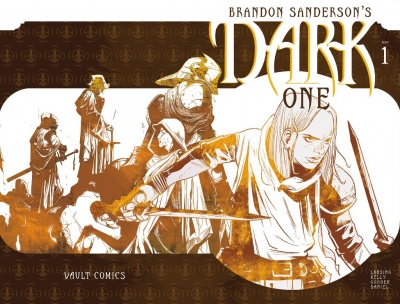 by Nathan Gooden
The interior cover

This meta article is a stub. Please help The Coppermind by expanding it.
Retrieved from "https://coppermind.net/wiki/?title=Dark_One_Book_1&oldid=143317"
Categories: