“It was terribly overwhelming. Garish. A vibrant, enthusiastic garishness. ”

T'Telir is the capital city of Hallandren on Nalthis.[2] It is set on the coast and is known for its blaze of color because of the dyes grown in the area. A person from T'Telir is called a T'Telirite.[3] 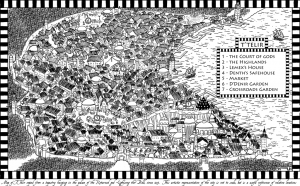 by Shawn Boyles
Map of T'Telir from a tapestry hanging in the palace of Lightsong the Bold, circa 327

The city of T'Telir is built in a crescent around a bay of the Bright Sea, abutting the water. This position means the city wall only has to run around the landward half-circle of the city. The city is designed with many gardens and open spaces that show off its greenery and has palm trees and other flora growing along the streets.[1][3] Like most of Hallandren, T'Telir is in the lowlands in a tropical climate: the temperature is quite warm, colorful animals and flowers are common, and harsh weather is rare.[4][5] The Court of Gods stands on a small plateau that rises above the city with a spectacular view of the sea.[1]

The city's placement on the sea makes it a choice location as a port; because of T'Telir's unique climate, it has a monopoly on dye production from the Tears of Edgli.[6] Other nations use the sea to bring exotic merchandise and fresh foods from their lands in trade.[7]

T'Telir is home to the Court of Gods, an imposing feature of the city built on a plateau and entirely walled off. This is where the Returned live in their palaces, each painted a different color, and assemble weekly to pass judgments.[1][8]

Another notable feature of T'Telir lies in the D'Denir Celabrin, imposing statues of warriors supposedly left as a memorial to those who died in the Manywar and as a reminder to the Hallandrens of the cost of war.[9] The first ones were left to the city by Peacegiver the Blessed right after the Manywar, though new ones are commissioned yearly by the Returned.[7]

The Pahn Kahl were the original inhabitants of the valley where T'Telir was later built, living in scattered fishing villages in the valley's jungles until the people of Chedesh sailed across the Bright Sea and settled in the area.[10]

The God King's palace was the first building constructed in the site of the future city of T'Telir.[11] It served as an outpost overlooking the bay and was built by the crew mates of Vo, the first Returned, three hundred years before the events of the Manywar. They named the kingdom they founded on the beaches of T'Telir's bay Hanald and elected Vo's wife as their queen.[10]

T'Telir was home to the descendants of Vo and his wife; the royal family fled the city at the climax of the war and established the nation of Idris.[12] After the Manywar was resolved, Peacegiver left the city of T'Telir a gift in the form of the D'Denir Celabrin.[7] These statues were ostensibly a reminder to the citizens of the cost of war as well as a memorial for the war's casualties, but in fact were the force known as Kalad's Phantoms.[9][13]

“You mean to tell me that our God King—the most holy and divine personage in our pantheon—died to cure a few tummy aches? ”

Two hundred and fifty years later, a plague of distrentia struck T'Telir. The disease was especially deadly among the elderly and the young, and the nature of it meant that it spread other diseases as well. This caused the city's commerce to slow drastically, meaning that outlying villages went months without necessary supplies. In the end, Susebron the Fourth gave his Breath to cure the plague and Susebron the Fifth began his rule.[14]

Thirty years into Susebron the Fifth's reign, he signed a treaty with King Dedelin of Idris that promised peace in exchange for his marriage to Dedelin's daughter.[12] At the time when the treaty was fulfilled twenty years later, T'Telir was the site of the Pahn Kahl rebellion. First, a Pahn Kahl named Vahr, a worker in the dye fields, made an attempt at stirring up his people.[15] He worked to that end for over a decade but was ultimately captured and imprisoned due to Bluefingers' information leaks and killed by Vasher.[16] Bluefingers himself planned an extensive subversive campaign centered around starting a war between Hallandren and Idris: he brought mercenaries and Pahn Kahl Awakeners into the tunnel system below the court,[17] manipulated Siri into distrusting the Hallandren priests,[18] and hired Denth's crew to increase tensions in the city.[19] When his plans were nearing completion, he tortured Blushweaver and Lightsong in order to get the Command phrases for Hallandren's Lifeless army, changed the Command phrase, and sent the army towards Idris.[20] The attempted rebellion was defeated when Susebron, with his newly healed tongue, used Peacegiver's Treasure to storm his palace with an army of Awakened cloths. Vasher decided to give him the Command phrase to Kalad's Phantoms, which he then sent after the Lifeless army.[21] 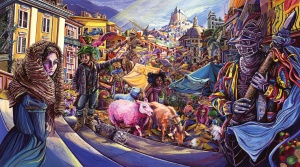 T'Telir is overwhelmingly bright, and the main areas of the city are very beautiful and lush with greenery.[3] Buildings are dyed in all colors here,[1] and the people, all of whom dress in vibrant colors and some of whom even dye their hair,[22] are much the same. D'Denir, huge statues of great warriors holding weapons in various poses, line the walkways and are frequently adorned by the people with brightly colored accessories such as scarves and hats.[7] Many streets in the city are just dirt, not laid with cobblestone, though they have slate sidewalks and are lined with palms and other tropical plants.[23] The streets also have pole-mounted lamps that are lit nightly, requiring an amount of oil only feasible due to the city's proximity to the sea and the trade it brings.[3] However, the slum areas where the Idrians of the city live aren't quite as nice: although still colorful, the colors are muted, the buildings are quite run-down and dirty, and there are many beggars and urchins.[24]

T'Telir is a very wealthy city compared to Bevalis, the capital city of Idris, and even has somewhat of a middle class.[7][25] The houses in T'Telir are generally much larger and nicer than in Idris,[23] and the city is one of the only places with enough wealthy people to support restaurants.[26] In fact, enterprising young street boys wander the neighborhoods proclaiming their services, willing to deliver food from restaurants right to people's homes for a fee.[23] The food served in T'Telir tends to be spicy, centered around seafood, and seasoned with exotic spices.[26][8]

“People jostled their way through the streets, draped ﬂagrantly in colors, yelling, and talking, and moving, and stinking, and coughing, and bumping.”

People here like to be together, tending to crowd the same streets.[23] Because of the warm climate, they are comfortable with wearing loose, revealing, and few clothes;[3] their clothes are of all kinds of designs, makes, and colors, all meant to make them stand out, though the overwhelming effect is then that no one stands out.[22] Most natives of the city believe in the Iridescent Tones and worship the Returned.[3] Timepieces are not common,[27] and punctuality is not a high priority in the city, especially among the Returned.[22] It is also uncommon enough to go fully armed in T'Telir that wearing a sword draws attention.[15]

While the culture of T'Telir is mostly uniform, there are some notable differences between rich districts and poverty stricken slums.

The flora of the wealthier districts is described as being incredibly diverse. Dozens of different palms, various ferns, grasses, and potted flowers (including the Tears of Edgli) can be found on a single garden plot. The buildings appear more rich. Slate sidewalks are constructed for pedestrians to make way for carriages, which are common in wealthier districts. Shopping districts do not contain merchants raising tents to shade themselves as they sell wares. Instead, there are many high quality, colorful shops with more expensive goods. While performers are present in these commercial areas, there are fewer than in the average shopping district.[3]

“Vivenna found the slums of T’Telir to be very interesting... like a carnival that had been hit by a mudslide. ”

The one of the slums of T'Telir, which can be found 15 minutes from Grable's restaurant, is decorated with faded and stained color. Bright strips of cloth can be found hanging from windows, stretched across overhangs, and sitting in puddles on the street. The D’Denir statues that decorate much of T'Telir are in some state of disrepair in the slums, one of which is a "broken statue of a horse man."[6]

T'Telir is the capital of Hallandren and home to the Returned.[1] The God King rules T'Telir officially and can overrule any decision made by the Court of Gods, although his priests usually make most decisions for him. The Returned are given votes when it comes to big decisions; before casting votes, they listen to their priests debate about the issues in Court Assemblies. Some of the Returned also sit on various councils and vote on other important matters in the city.[28] This method of government, waiting on debates that must be brought to the gods (who cannot leave the court to be among the people of the city) by the priests, operates much more slowly than Idris' monarchy.[12]

The King and the rest of the Returned are revered as gods, and those of people who are in trouble, are sick or lame, or need help of some sort, can go to them during their daily time to receive Petitions.[5] The poorer people are also entered into a lottery where they can come to Court Assemblies and view the gods while they make their decisions.[29] However, at the time of the Pahn Kahl rebellion, people are beginning to doubt their gods more and more, seeing them as less divine, weaker, and less wise.[30] Though the general opinion in the city before Siri's arrival expected Idris to back out on the treaty with Susebron, there are still some in the court pushing very vocally for a war with Idris, which they consider little better than a rebel enclave within Hallandren's borders.[26][8]

This page is probably complete!
This page contains most of the knowledge we have on the subject at this time.
It has yet to be reviewed.
Retrieved from "https://coppermind.net/wiki/?title=T%27Telir&oldid=150194"
Categories: