“But surely we can bend the rules a little bit? ”

Sisirinah or Siri is a princess of Idris[3] and the queen of Hallandren on Nalthis.[4] 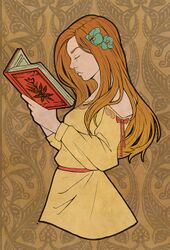 Siri is an attractive young woman.[5] She has the Royal Locks and has poor control over them, allowing them to follow her moods naturally. This leads her to often have blonde hair the color of joy and excitement.

Siri is a hasty and impulsive youth.[6] Though she also has an inner steel, as proven by her ability to survive in the Court of Gods and learning to control her hair in tense situations such as her confrontations with Treledees.[7] This is also emphasized by her stubbornness which she uses to strengthen her in difficult situations.[8]

She struggles with some feelings of inferiority especially when compared with her 'perfect' sister Vivenna.[3][4] She recognizes that this is part of why she was always defiant as a child: partly to gain attention (something forbidden by the teachings of Austrism) and partly because she knew she could never live up to Vivenna's example.[9] She likes being spontaneous and colorful, unlike her elder sister. This makes her feel a failure in Idris, but helps her excel in T'Telir. Siri is drawn to the ostentatious and the mysterious. Where many traditional Idrians, such as Vivenna, are disgusted by the displays of wealth and talent in Hallandren, Siri must force herself to not be distracted by them.[10]

Siri is very brave, empathetic and acts with initiative. This is best demonstrated by her willingness to sacrifice herself for her family and people in becoming the bride of the God King. Later she shows these in her confrontation of Susebron (Which she believed could cost her her life) and subsequently her teaching him to communicate.

As a member of the Royal family of Idris she has the Royal Locks. This means she can change her hair's length and color at will, though it takes effort.[3] 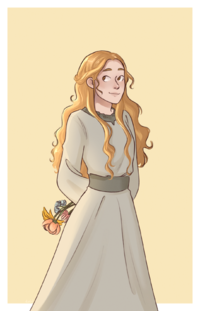 “There were great advantages to being unimportant ”

—Siri thinking about herself[3]

Siri is the youngest child of the Idrian royal family, and spent most of her youth feeling and being largely redundant. Her oldest sister, Vivenna, was being raised to marry the Hallandren God King, her only brother Ridger was set to become the next king of Idris, and the second-youngest daughter, Fafen, had joined the Austrian Monasteries, as one child from each Idrian family was expected to do. Siri had no particular expectations on her, and so whiled away her days ignoring her tutors and pushing Austrism's conservative limits. She refused to control her Royal Locks, instead letting her hair always reflect her emotions; she picked colorful flowers and gave them to the children of Bevalis. Her father typically ordered Siri to work in the royal kitchen when he bothered to address her misbehavior at all. Unbeknownst to him Siri was friends with the cook, Mab, and enjoyed the work.[3]

When the time came to fulfill the treaty he had signed with the God King, King Dedelin decided to send Siri to wed him in Vivenna's place. So at seventeen, Siri found herself ripped from her carefree life and deposited in a carriage to T'Telir. She spent the journey trying to come to terms with her father's decision, mostly by yelling her confusion at the small group of guards that accompany her.[4] 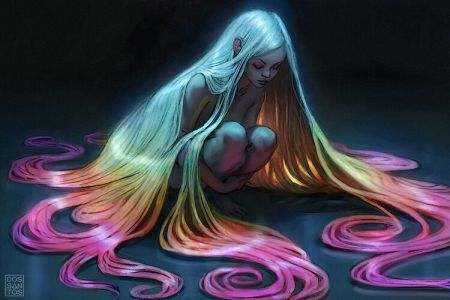 by Dan dos Santos
Kneeling in front of Susebron

As she arrived in the capital, Siri was taken aback at the massive Lifeless honor guard that met her, and the pervasive color that decorated every person, building, and market square. She gathered herself enough to order her equally overwhelmed guards to leave her and return home, and Siri vanished alone into the Court of Gods.[11]

Siri was stripped, bathed, dressed, and groomed in a whirlwind of activity as a Pahn Kahl scribe called Bluefingers explained that there would be no formal wedding ceremony. She, the Vessel, would simply enter the God King's bedchambers and await his whim. She was told she could not talk to, make eye contact with, kiss, or even proactively touch Susebron, but must enter, strip, kneel, and wait for his signal to approach the bed. Then Siri was led, in a dress magnitudes more extravagant than anything she had ever seen, to the God King's chambers.[5]

Siri spent that night, and many after it, kneeling until she passed out from exhaustion in front of a silent, unmoving figure who would be gone when she awoke.

After a week Siri was presented to the Court of Gods where she met Lightsong.[12]

Over the course of several weeks Siri acted out by degrees: she sat up and made eye contact with Susebron, she refused to completely strip, she began curling up in her dresses and sleeping on the floor, and finally, after Treledees informed her that the priests listened in on the chamber at night, she faked the sounds of sex and fell asleep on the bed. Each night the God King only watched her silently.[13]

One night, after Siri's performance, she was startled by a figure looming over her. Susebron had risen from his throne by the bed and approached her where she laid. Siri shrieked in terror but when her reaction appeared to startle Susebron, her fear was replaced with confusion. The God King pulled out a book of children's stories, gesturing silently for her to read it, and Siri realized that Susebron had no tongue. Coming to the conclusion that Susebron was essentially a prisoner in his own palace, Siri agreed to teach him to read.[14] 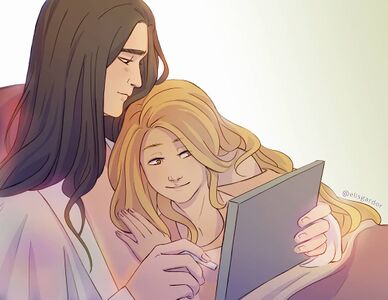 by Elisgardor
Reading to Susebron

Each night after that one, Siri performed her act on the bed, although at some point she stopped doing this, then she and Susebron sat up all night, as she taught him to read and write they began having conversations with the aid of a small chalkboard. Siri learns that most of Susebron's character is formed from a mix of the fairy tales in his children's book and lessons he received from the priests when he was young. His simplistic worldview, strong moral backbone, and cautious rebellion against his gilded cage drew Siri to him, and she began planning how to protect him as well as herself from the threat she suspected the priests posed.[15]

At one point Siri asked Lightsong to call a storyteller to tell her about the history of Hallandren, specifically previous God Kings and why they all died after their heir was born.[16]

At another point Siri extracted a promise from Bluefingers to smuggle her and Susebron to safety if the threat to Susebron's life became too great.

Eventually Siri realized that she and Susebron had fallen in love, and they began actually sleeping together.[6]

Being concerned with both her and Susebron's safety, when Susebron's High Priest talks to her and guesses how she's thinking, she realizes that the priests are 'reading' her emotions from her hair and begins practicing keeping it stable, as her sister Vivenna always did.

Siri devised a plan to explain to Lightsong that Susebron could not speak, and with him convince the other Returned to demand to hear from their king, exposing the priests' deception; however as she headed to the Assembly to meet with Lightsong, she was cut off by a group of priests. They informed her that she was to go into seclusion due to her "pregnancy" and moved her to a room outside of which they posted a guard.[17]

Siri waited in the room, occasionally hearing the sounds of fighting, until Treledees appeared and took her to another room, full of priests who surrounded Susebron. Bluefingers offered to take the two of them through the tunnels to the docks, and Treledees assented, but as they headed out of the room Siri realized that the Pahn Kahl are the only group likely to benefit from the conflict that had consumed the God King's palace and would soon consume two nations. She confronted Bluefingers and he ran off.

Returning to Treledees and the priests, Siri and Susebron attempted to fight their way out of the palace, but are met at the entrance by two groups of Bluefingers' fighters. The priests unflinchingly sacrificed themselves in defense of the God King, but Bluefingers' group overwhelmed them and Siri and Susebron were taken captive.[18]

Susebron was taken away and Bluefingers led Siri to an altar deep within the palace where he intended to kill Siri and make it look like ritual human sacrifice to push Idris and Hallandren into war. However Susebron appeared at the last moment, mind and tongue healed by Lightsong's sacrifice, and rescued Siri.[19]

With the aid of Vasher, Susebron counteracted the last effects of the rebellion, and war was averted.[20] 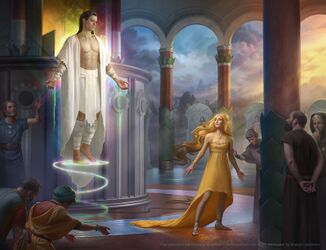 She is the daughter of King Dedelin of Idris, and the wife of the God King Susebron. She is the sister of Vivenna, Ridger and Fafen.[3] As a member of the Idrian royal family, she has a lineage that traces back to Vo.[16]

Siri's marriage was arranged by her father, who sent her, instead of Vivenna to fulfill the treaty. At first, Susebron was a stranger to her, this person who just sat there in the darkness at night. Eventually, Susebron approaches her, showing her a storybook. This is the start of their relationship in more than an official sense, as she teaches him how to read. They grow closer through Siri's lessons, and they start communicating through writing. They share parts of their cultures with each other, and Siri even comments that he knows her better than anyone back at home.They grow to truly love each other. [17] When Bluefingers and the Pahn Khal try to take over they are both captured, and Bluefingers intends to kill them. Thanks to Lightsong, Susebron manages to save her. When Siri and Vivenna reunite, Susebron talks with Vivenna, who remarks in her thoughts that she can tell just how much Susebron and Siri love and understand each other.[20]

Siri initially find's Lightsong's playful banter to be an insult, but quickly realizes that he means no harm and warms up to him after he helps her navigate the politics of the Court of Gods. She believes that he is a good man, albeit a strange one.[10]

Siri enjoys Llarimar's helpfulness, contrasted by the discourteous attitude she's experienced from the priests in her own court.[10]

This article is still missing information. Please help The Coppermind by expanding it.
Retrieved from "https://coppermind.net/wiki/Sisirinah?&oldid=156423"
Categories: