“I've tried going back. But the darkness... it's inside. I can't escape it. My laughter has an edge to it. I can't forget. ”

Denth or VaraTreledees[4][5] is a worldhopper and one of the Five Scholars from Nalthis.[6] He may also be a member of the royal line of Idris. 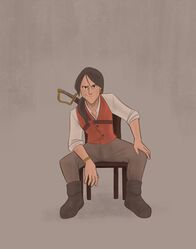 Denth appears to be a man in his thirties. He dresses in nondescript brown leather, but he keeps some colour, such as his red vest. He has a long face and styled hair pulled back into a neat short ponytail.[7] He keeps himself well groomed and is clean-shaven.[8]

His overall outlook is cynical, likely colored by his own frustration that he finds himself having to do things he feels bad about.[9] [expand]

Denth is a superb swordsman. He is so quick he can kill most people, even trained warriors, before they can react. Even accomplished fighters such as Vasher are clearly outmatched by him.[10][2]

Denth is remarkably clever and understands Awakening on an advanced level, as one of the Five Scholars.[2]

Denth is a consummate actor and manipulator, able to deceive Vivenna and the other Idrians for months into setting up a war for him.

He did 'not travel the cosmere widely'.[3]

Little is known of Denth's life before he shows up in Hallandren. Denth was originally known as VaraTreledees and was a scholar before the Manywar. He initially tried to stop the war, but ultimately took Vasher's side.[11] He now hates Vasher for killing his sister Shashara and does not care that Vasher did it to protect the secret of Awakening steel.

Some time after the Manywar he took the name Denth and created a mercenary band with Tonk Fah, Jewels, and Arsteel. At some point Arsteel encountered Vasher and was killed by him. Denth took this opportunity to see how a dead Returned works as a Lifeless, and they renamed him Clod.

Denth has also spent time on the planet Roshar, though when and for what purpose remains unclear.[3]

Denth conspires with the Pahn Kahl rebels to overthrow the Hallandren government. Denth and his band infiltrate the Idrian spy network to kidnap Vivenna. Acting as mercenaries working for Lemex they befriend Vivenna after poisoning Lemex to make it look like he died of illness. Denth uses Vivenna to increase tensions between Hallandren and Idris to drive Hallandren to war. Later, after Vivenna is kidnapped by Vasher, Denth and Tonk Fah torture and kill Parlin, Vivenna's friend to try and discover where she has gone. When Vivenna escapes from Vasher and returns to the safe house, she uncovers the truth about Denth and Tonk Fah. In the ensuing confrontation, Denth is attacked by Clod on Vivenna's command, and she escapes. Denth catches Vasher while he is attemping to rescue Vivenna's sister Siri who is living in the god king's palace. He has Vasher's sword Nightblood thrown in the water so it can cause no further harm, then has Vasher hung by his wrists in a room with no color in the god king's palace to interrogate him. After retrieving Nightblood, Vivenna assists in Vasher's escape. Denth is killed by Vasher in a duel; Vasher stabs Denth after transferring what Breath he had left into Denth in order to stun him. Vasher was not a better swordsman than Denth, and this was known by both characters.

During the Pahn Kahl rebellion, Denth fights a duel with Vasher to prove that Vasher is not a better swordsman than Arsteel, and to find out how he won. Denth's fight with Vasher reveals that Denth is the better swordsman, however Vasher is more cunning. Vasher gives his Breaths to Denth, effectively stunning him for a moment and Vasher runs him through with his dagger. As Denth dies, his hair flashes between colors, eventually falling to stark white. This reveals that Denth has the Royal Locks, independent from being a Returned.[13]

This article is still missing information. Please help The Coppermind by expanding it.
Retrieved from "https://coppermind.net/wiki/Denth?&oldid=170513"
Categories: