“I’ve gained notoriety through abusing the souls of others. And now I’m dying. ”

Lemex is an Idrian merchant living in T'Telir and King Dedelin's chief spy in Hallandren.[3] As head of the spy network, Lemex is the only one besides the king who knows who all of the other spies are and what projects they work on.[2]

“But…I felt so powerful. I could make the very dust of the earth obey my command. It was for the good of Idris! ”

Lemex is a crafty, intelligent man in his fifties, an age which is considered older,[3] though up until Denth begins poisoning him he is sprier than might be expected due to his wealth of Breaths. When Vivenna meets him for the first time, he is bed-ridden with fevers that leave him pale and clammy, delirious, and thin.[2] The power he feels from having such a large supply of Breaths compels him to buy more and more Breaths. Lemex justifies doing what he, a follower of Austrism, feels is wrong by focusing on how his aura allows him easier entrance to parties and to court assemblies to gather information he might not otherwise have access to.[2] He seems to be a patriot honestly working for the good of Idris despite embezzling money from the king at the same time.[4] Lemex's greed and desire for a lengthened life also spur him to stockpile Breaths, though, and some of the things he writes to King Dedelin added to the way he hides money around his house leaves some doubt as to whether or not he might have turned traitor in the end.[5]

“I believe that Lemex was still loyal to Idris... He was not a traitor; he was simply greedy. ”

Lemex established himself in T'Telir as a spy in King Dedelin's service. The king funded the purchase of fifty Breaths for Lemex for the purpose of granting the man access to court assemblies, after which Lemex began fudging numbers in his expense reports, pocketing the extra money and using much of it to buy more Breaths for himself.[4] The looming threat of war also contributed to the king's decision to send Lemex even greater resources.[5] After Bluefingers hired Denth's crew to aid in inciting war between Hallandren and Idris, the crew sought out employment under Lemex as an in with the Idrian community.[1][6] Denth began deftly manipulating Lemex into unwittingly aiding the Pahn Kahl rebellion while making it seem like he was helping Idris. However, after some time Lemex began to grow less tractable; this together with the news of Vivenna's imminent arrival precipitated Denth's decision to poison Lemex.[7] 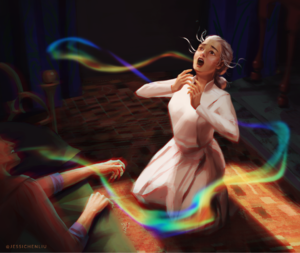 by Jessica Liu
Giving his Breaths to Vivenna

On their way to T'Telir, Vivenna and Parlin arranged via letter to meet with Lemex, whom Vivenna hoped to use as a mentor during her time in the city. When they arrived at the restaurant chosen for their meeting place, they were instead met by his employees, two mercenaries named Denth and Tonk Fah.[3] The men took Vivenna to see Lemex, who was bed-ridden, feverish and pale. Denth claimed Lemex had fallen ill, though the roughly five hundred Breaths[4] the man had accumulated while living in T'Telir rendered him immune to all disease. In reality, Denth had been poisoning Lemex for some time.[8] Lemex regained lucidity long enough to have a short conversation with Vivenna in which he admitted that after inheriting Breaths from his predecessor, despite feeling it was wrong, he continued to seek out and buy more Breaths. Undeterred by Vivenna's attempts to ask him for names and passcodes to allow her access to the Idrian spy network, he remained fixated on his wrongdoing and kept discussing his Breaths. He gave them to Vivenna, who desperately did not want to take them; then, having lost the Breaths' resistance to poison, he died quickly[2].

Denth claimed that Lemex was embezzling from Idris, a claim that the paperwork in Lemex's house substantiated. When Denth's crew searched his house, they found five thousand gold marks hidden in various places as well as an assortment of papers and letters documenting Lemex's plans and his correspondence with King Dedelin.[5] Vivenna decided to continue Lemex's work, not realizing that many of his plans to disrupt Hallandren's ability to wage war fell in line with Denth's plans to exacerbate tensions between the two nations.[7]

This page is probably complete!
This page contains most of the knowledge we have on the subject at this time.
It has yet to be reviewed.
Retrieved from "https://coppermind.net/wiki/Lemex?&oldid=167762"
Categories: