—Tonk Fah to Denth and Vivenna[1]

Tonk Fah is a Pahn Kahl[2] mercenary on Nalthis and an important member of Denth's crew.[3]

Superficially Tonk Fah can appear to be a funny, somewhat simple, but good-natured mercenary, who likes to nap and eat.[4][2]

In reality, he is a sociopath and sadist who works with Denth as a thug; left to his own devices he'd be a serial killer. He is "large of girth" and carries a cudgel strapped to his back.[5] He is less groomed than Denth.[1]

He keeps a succession of exotic pets, which he secretly tortures and kills when the urge takes him. It takes Denth a large effort to have him re-focus his attention to animals instead of humans.[6]

Tonk Fah is a capable warrior and extremely strong. He takes on five Lifeless when fleeing the raid in the slums and even incapacitates two as they try to kill Vivenna.[7] Both of these abilities seem to be enhanced by his great size.

Tonk Fah also has the uncanny ability to fall asleep at a moments notice.[8] 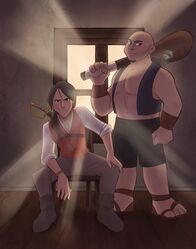 by Imaginative Joy
With Denth

When Vivenna arrives in T'Telir, Tonk Fah and his companion Denth intercept her as she goes to meet Lemex, the Idrian spymaster in the town. He helps convince her with his casual, somewhat jovial style that he is a simplistic and misunderstood mercenary. He appears to be eager to please and quite diligent in carrying out orders.

Tonk Fah and Denth were employed by Lemex in support of Vahr's rebellion[9], but were secretly poisoning him.[10] Upon his death, Tonk Fah discreetly disposed of Lemex's body.[1] Later, he helps ransack Lemex's home in search of his valuables and plans[9] and helps guard Vivenna while she meets with Idrian slum lords [4]. Behind the scenes, Tonk Fah has already killed at least three Idrian soldiers sent to retrieve Vivenna from Lemex's ransacked house.[11]

After Parlin was tortured and killed by Tonk Fah [12], Vivenna escapes into the streets. During her escape attempt she first tries to awaken Tonk Fah's cloak, but due to a bad command this does not work; she instead uses Clod's lifeless command as a distraction. While starving on the streets, Vivenna sees that the first soup kitchen she goes to is being watched by Tonk Fah, and thus she avoids going to any of soup kitchens even while on the verge of death.[13]

After Vivenna sneaks into the Court of the Gods in order to help free Vasher with the guidance of Nightblood, she comes across Denth torturing Vasher, with Tonk Fah idly sleeping with his back against the wall. Vivenna uses an Awakened rope to strangle Tonk Fah, which distracts Denth as he moves to help Tonk Fah escape the binding.

While Tonk Fah keeps an eye on Vivenna during the duel between Denth and Vasher, she realizes that he was still wearing the same cloak she had placed her BioChromatic Breath into. She uses this to distract Denth.[3]

After Denth is killed by Vasher, Tonk Fah takes his money and escapes with Jewels.[14]

He is in a mercenary band with Denth, and Jewels, and Clod.

As a part of Denth's crew, Tonk Fah temporarily pretends to be employed by and allied with Vivenna. In reality he is in the employ of Bluefingers.

“Don't make important people angry unless you're getting paid by people who are even more powerful. ”

“We kill sometimes, but we don’t murder. That’s assassin work. ”

This article is still missing information. Please help The Coppermind by expanding it.
Retrieved from "https://coppermind.net/wiki/?title=Tonk_Fah&oldid=161551"
Categories: