“When others look at something—a person—one may sometimes seem more beautiful than another. This is not so for me. I see only the colors. The rich, wondrous colors that make up all things and give them life. ”

Susebron is the God King of Hallandren on Nalthis around 300 years after the Manywar.[3] He is a Returned and is given two or more Breaths every week by his subjects in order to keep him alive.[2] He is the fifth God King in the three hundred years since the Manywar.[4] 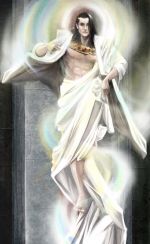 “All of those stories are just tales told by people who lived lives before ours. What they say about humankind is true. I have watched and seen how people act. It is strange, for me, to interpret these things, for I do not see as normal men do. I am the God King. Everything, to my eyes, has the same beauty. ”

—Susebron on his perception of beauty[2]

As a Returned, Susebron looks about twenty, much younger than his fifty years.[5] He is described as having dark hair, black eyes, and pale skin, though it is revealed later that he can learn to change his appearance at will.[6]

He is naive, having grown up in a virtual prison imposed upon him by his priests. He is highly trusting of them, and refuses to believe that they may wish him harm (though it is worth noting that his faith in them turns out to be well-placed).[2] His main source of knowledge about morality is a book of stories that once belonged to his mother, the morals of which he follows from memory.[7] Later, he begins to figure some things out for himself, though he continues to hold to the book's rules, making him honest to a fault.[2] Susebron is highly devoted to the people he trusts, including Siri and the priests, and refuses to abandon either of them. Nonetheless, he can be realistic in his assessment of others and is keenly aware of his own shortcomings as a ruler.[8][6]

He is very fond of sweets and justifies eating a lot of them by saying that as a Returned, he can't gain any weight.[9]

Throughout most of his life, Susebron was mute and unable to read or write using the common alphabet. He did, however, understand the color-coded Hallendren artisan's script, which provided the only means of communication between Susebron and his priests.[10] Because he wasn't taught how to Awaken mentally, he was unable to use his Breath to Awaken. He eventually manages to learn how to read and write from Siri, and has his tongue restored by Lightsong, immediately gaining the ability to speak.[2][11]

He has been gifted with Peacegiver's Treasure, a sum of approximately fifty thousand Breaths. Additionally, he receives two to three Breaths every week which causes his hoard of Breath to grow steadily over time. This grants him the Tenth Heightening and all the abilities of the Heightenings beneath it, including:[12]

The Peacegiver's Treasure makes Susebron effectively immortal, and even if he were to suddenly be cut off from his weekly supply, he could still live for over nine hundred years feeding off it.[14] This amount of Breath might also make him immune to emotional Allomancy.[15] In addition, as the God-King, he's capable of using his divine Breath to heal multiple people instead of just one.[7] Whether this is because he was Returned young or some side-effect of holding Peacegiver's Treasure is uncertain.

Though little has been shown of Susebron's Awakening abilities, he is naturally extremely powerful by the virtue of the sheer number of Breaths he possesses. Shortly after regaining his tongue, he was capable of controlling hundreds of individual Awakened objects simultaneously.[6]

Though he is a king, it's uncertain how much in the way of political skill he has, as until very recently, he's been little more than a figurehead of the priesthood.[10]

Susebron was an infant Returned fifty years before the Pahn Kahl rebellion. He was born to a poor family living far to the north in Hallandren, to a merchant and his wife.[16] At the time of his Return, the current God King was unable to produce a child, and so the infant Susebron was given Peacegiver's Treasure and made the new God King after his predecessor gave up his Divine Breath to cure a plague.[16][17] At some point either before or after his crowning, his tongue was removed so that he would be unable to use the wealth of Breaths that had been bestowed on him.[18] His mother raised him in the palace, though eventually she was "taken away".[7][9] Through the years he managed to retain a storybook she used to read him; he had heard the stories so many times and looked at it over the years that he had memorized each symbol, and the morals of the stories in the book were in part the code by which he lived.[19]

Throughout most of his life, Susebron resided mostly alone in the black palace of the God Kings in T'Telir. Despite being the official ruler of Hallandren, he was kept away from its people and other Returned, only coming out briefly on special occasions in order to hide the fact that he was mute.[18] At the time, he had not been taught to Awaken by thought. 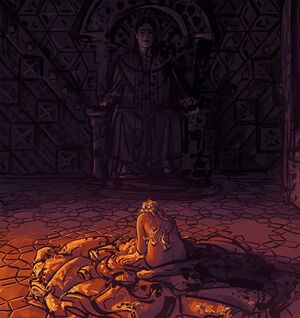 “I don't think God Kings are supposed to be "sweet." ”

—Suseborn showing his lack of knowledge on metaphorical terms[2]

To forestall a war between Idris and Hallandren, Susebron was promised the hand of king Dedelin's daughter, Vivenna. At the last moment, however, she was swapped for her sister, Sisirinah, and Susebron ended up marrying Siri.[1] For a long time, Susebron and Siri met only at night, as the priests wanted them to make a child, but neither acted, as Siri was awaiting Susebron's first move while Susebron had no idea what was expected of him.[7] Initially, he feared Siri, uncertain as to why she spent her nights waiting, naked, on his floor. After she began to perform her moaning and screaming routine for the priests, he approached her with a book, hoping to start some communication.[10]

Siri taught Susebron to read and write using his mother's storybook, and they started to converse, him writing on a board, and her speaking.[10] As he and Siri planned how to reveal to the other gods that he had no tongue, the two began to fall in love. He would spend long hours with her, learning about things like sarcasm and mockery, about places such as Idris, and about Siri's life growing up.[7] During one of these conversations, Susebron expressed an interest in meeting Austre.[2] Eventually, he and Siri consummated their marriage.[9]

After much convincing from Siri, Susebron decided to finally reveal his true function in the court to the other gods, with the plan for failure being to flee with Siri and Bluefingers.[14] However, before either could happen, Siri was taken away by the priests under the guise of her pregnancy forcing her to stay in seclusion.[20] Almost immediately afterwards, the Pahn Kahl attacked the Court of Gods, and imprisoned both Siri and Susebron.[21]

The latter found himself in a cell next to Lightsong, who sacrificed his own divine Breath to heal him, restoring his tongue. Now able to speak, and armed with enough Breaths to let him instinctively Awaken, Susebron freed his palace from the Pahn Kahl invaders and saved Siri.[11]

Soon after the rebellion was quenched, Susebron was approached by Vasher, who gave him the command to the Kalad's Phantoms strewn about the city.[6] He used it to send the statues after the Lifeless army, which was bearing down on Idris. He himself remained in T'Telir along with Siri, now with far more influence on Hallandren politics.[22] 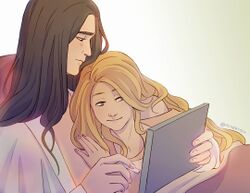 “There is nothing so wonderful as you, even in my entire court. The mountains must be special indeed, to produce such beauty. ”

Siri and Susebron are married. Though the purpose of their marriage is to solidify political alliances and to fulfill the agreement between Hallandren and Idris set up two decades previously, they come to love each other deeply. Siri is not initially meant to be Susebron's wife through the agreement; instead, her older sister Vivenna is groomed her whole life to marry the God King. However, when Vivenna turns twenty-two and the time comes that she must travel to Hallandren to wed Susebron, her father, King Dedelin, decides to send Siri in her place. Despite Siri's initial terror at the prospect her marriage to Susebron, the two strike up a friendship which turns quickly to love.

This page or section contains details from the unpublished work Mythwalker!
This information has the potential to ruin plot elements of both published works and upcoming book releases for the reader. It should also be considered uncanonical and could completely change in the future.

Siri, Vivenna and Susebron were developed together. Originally, they were all characters from Mythwalker, Brandon's ninth, unpublished novel.[23] Susebron was unnamed in Mythwalker, going only by the name of the Emperor, but was likewise going to marry Vivenna (Vvenna in Mythwalker) before marrying Siri instead.[24]

The Emperor in Mythwalker retains the same divine status Susebron has, but the details are slightly different: he's significantly younger, has been crowned at the age of ten rather than shortly after his birth, and wears black rather than white in court.[25] He's also not a Returned, as Awakening did not yet exist in its current form.

Though the Emperor is present for Siri's marriage to him (in contrast to Susebron), his early meetings with her go much the same as they do in Warbreaker.[26] However, as the Siri in Mythwalker possesses powers that would allow her to regrow his tongue, the plot requires the two to remain in that initial state of non-communication for far longer than they do now.[27]

Though Brandon never finished Mythwalker, the budding relationship between Siri and the Emperor was one of his favorite parts of the story, which is why he revisited it in Warbreaker.[28] Though their plot was re-written significantly to improve the pacing, the Emperor's personality did not change when he became Susebron.[23]

This article is still missing information. Please help The Coppermind by expanding it.
Retrieved from "https://coppermind.net/wiki/Susebron?&oldid=160700"
Categories: