This page is about the character in Steelheart. For information on the Aon, see Aon#Tia.

Tia is a member of the Reckoners.[1] She generally is on operations during missions and is the group's main researcher. She is the only one among the Reckoners to know Prof from before the arrival of Calamity. She is also one of the main people to get in touch with the Reckoner's contacts such as the Knighthawk Foundry. She offers to teach David her side of the Reckoners, but he refuses, as it means he wouldn't be able to do point duty any more. 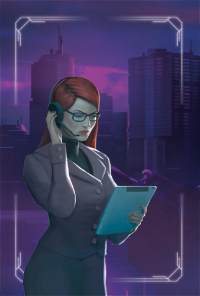 Tia has shoulder-length red hair and spectacles, and is described as articulate and narrow-faced [2]. She is the team's researcher, and she also runs operations. She and Abraham are the most skilled with the tensors out of the team members, although Tia rarely goes out into the field as a fighter. She also drinks a lot of a particular brand of cola, especially when stressed. It is believed that this cola comes from the city of Chattanooga.[3]

Tia was a rocket scientist for NASA and used to date Prof, allowing him to visit her at work.[4]

When Prof became a full Epic, it was believed he killed Tia, but in truth she had come to Ildithia and hidden with the Stingray Clan where David and Abraham find her. She is then captured by Prof, but is rescued by David. During the rescue, she lingers behind in order to hack Prof's computers. Prof accidentally kills her while attacking David and Megan.

This article is still missing information. Please help The Coppermind by expanding it.
Retrieved from "https://coppermind.net/wiki/Tia?&oldid=159214"
Categories: