This page or section needs to be updated with new information for Cytonic and Evershore!
Be aware that in its current state, it may not include all additional content yet.

“Our ancestors were frightened of what lived in the nowhere. ”

The nowhere, also called the negative realm, is an inter-dimensional reality that can be accessed and utilized by people with cytonic abilities.[2] It's also the home of the delvers, and the primary medium for faster-than-light travel and communication.[3][4]

“I was only in the nowhere for a moment, but in that place, time seemed to have no meaning. ”

The nowhere is a space existing alongside the ordinary one, with different rules of physics.[6] The flow of time there appears to be disturbed; nowhere is often referred to as a "timeless" space, and it seems that only cytonics are able to perceive being there, with any other creature feeling as though no time has passed at all between exiting and reentering physical space.[7] This timelessness also extends to non-living beings, as signals and matter travelling through nowhere can cross vast physical distances in an instant.[8]

Little is known of the appearance or geography of nowhere. It's pitch black, with the only source of light being the eyes of the delvers. There is no gravity; however, the nowhere either has breathable air, or the people who enter it lose their need to breathe.[7] Despite that, there is some physical matter in the nowhere -- the acclivity stone.[9]

Interacting with the nowhere leaves cytonics with a sense of cold and a strong headache for hours afterwards.[10] Both of those effects seem to lessen as a person's skill with cytonics grows.[11] 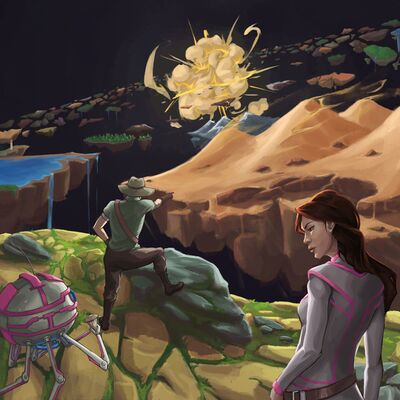 by EccoS
Spensa, Chet and M-Bot in the Nowhere

The nowhere can be accessed by any cytonic by focusing and meditating. Getting close to or inside the nowhere is crucial to most, if not all of their abilities.[5] Chief among them is FTL travel, which requires the cytonic to enter and exit the nowhere completely. They can do so by themselves, but they can also take with them passengers and objects.[12] The latter seems to require mechanical aid in the form of a cytonic hyperdrive.[13]

Machines can likewise utilize the nowhere. The timeless nature of it allows for signals to be sent through it at faster-than-light speed, which artificial intelligences such as M-Bot use to facilitate the high-speed processing necessary for them to function.[3] Regular machines also use this to communicate across star systems, both to send messages between people on various worlds, and to control drones from a safe distance without the light-speed lag.[14]

“Nowhere portals are stable openings, like wormholes leading into the nowhere. ”

Ordinary people can access the nowhere through nowhere portals, gateways that allow one to physically enter and exit the nowhere. They are typically surrounded by numerous symbols of unknown meaning, suggesting that they might've been artificially constructed. When active, they create a wormhole that connects the physical space with the nowhere. This allows for the mining of acclivity stone, which provides anti-gravity to the spacefaring species of the galaxy. As such, the presence of a nowhere portal in a system can bring great riches to its inhabitants.[9]

Though it's unclear how the nowhere portals were made or by whom, the process can be recreated, as the Superiority's Department of Protective Services has managed to conjure a nowhere portal of their own. That portal takes on the appearance of a black sphere hovering above the ground, roughly the size of a person's head. When a person touches the sphere, they appear to stretch towards it before being absorbed into it.[15] Like its predecessors, Superiority's portal is surrounded by a ring with alien writing etched into it, suggesting that the symbols are crucial to crossing the barrier between realities.[16]

There are also the nowalks, which likewise seem to somehow connect physical space with the nowhere. Those nowalks were used by human military during the second Human War. However, what precisely they are -- and if "nowalk" isn't simply another name for a nowhere portal -- is uncertain.[17]

This article is still missing information. Please help The Coppermind by expanding it.
Retrieved from "https://coppermind.net/wiki/Nowhere?&oldid=164150#Belt"
Categories: