Shadows for Silence in the Forests of Hell

Shadows for Silence in the Forests of Hell is a cosmere novella by Brandon Sanderson set on the planet of Threnody.[1] It was originally published in the Dangerous Women Anthology edited by George R.R. Martin and Gardner Dozois.[2]

The protagonist of the story, Silence Montane, is a dangerous woman, in keeping with the anthology's theme.[3]

For a chapter by chapter summary, see Summary:Shadows for Silence.

The story follows Silence Montane, the proprietress of a waystop in the Forests of Hell and secret identity of the legendary bounty hunter known as “The White Fox.” Desperate to remain solvent and keep her waystop out of the hands of her creditor Theopolis, she takes on the challenge of hunting down Chesterton Divide, a notorious highwayman, and his crew. The complexity of the job quickly escalates as the night goes on. By the end, there are unexpected consequences for everyone involved.

The story takes place on one of the two major continents on the planet Threnody,[4] in an area known as the Forests of Hell. The action centers around Silence's waystop and the forests nearby.[5]

Threnody is not considered a "major" planet in the overall narrative of the cosmere[6] and is not currently inhabited by a Shard,[1] but past events in the Threnodite system still hold direct relevance to current events occurring in the universe.[4][6] Hoid does not appear in the story, though other worldhoppers may have.[7] 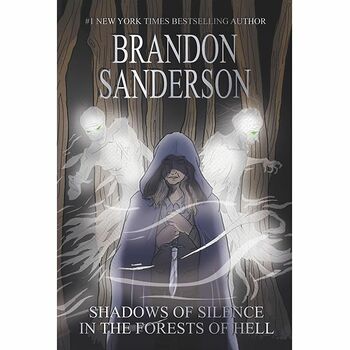 Silence Montane
Proprietor of a waystop, and secretly the bounty hunter known as "the White Fox"
William Ann Montane
Silence’s 14-year-old daughter
Theopolis
A tax collector from the forts
Red Young
An opportunistic bounty hunter from the forts
Sebruki
An 8-year-old girl adopted by Silence after Sebruki's family was murdered
Chesterton Divide
A violent and notorious highwayman

Brandon was pleased with the story and has consistently referred to writing a novel set on Threnody,[8][9] partly because he would use the novel to introduce a group with relevance to the overall cosmere.[10] It is unlikely that Silence would appear in the story, except as a potential cameo.[11]

George R.R. Martin approached Brandon about contributing an anthology short story during a book signing at a convention circa 2011.[12][13] Brandon eagerly accepted, and decided to create a "dangerous woman" that did not adhere to familiar tropes.[14][13] He was inspired by the puritan name "Silence", and wanted to make the dangerous part of her character something unexpected.[14] The Simple Rules regarding Shades are vaguely based in Jewish traditions.[13] Isaac Stewart came up with the planet name "Threnody",[13] although the name was not revealed until after publication.[15]

Shadows for Silence in the Forests of Hell was bundled with Perfect State in a hardcover edition as a 2015 Con Exclusive.[17]

The story also appears in the cosmere short story omnibus Arcanum Unbounded, accompanied by an essay on the Threnodite system[4] and a postscript.[13]

For a cover gallery of Shadows for Silence in the Forests of Hell, see /Covers.

Shadows for Silence in the Forests of Hell consists of a 940-word intro and a 468-word outro from the PoV of Daggon, while the remainder is written from the PoV of Silence.

This meta article is complete, but has yet to be reviewed.
Retrieved from "https://coppermind.net/wiki/?title=Shadows_for_Silence_in_the_Forests_of_Hell&oldid=166820"
Categories: