William Ann Montane is the fourteen year-old daughter of Silence Montane, who lives with and helps her mother in the running of a waystop in the Forests of Hell.[1] 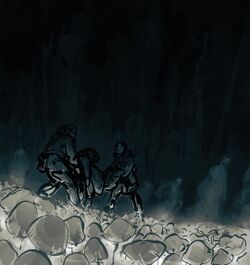 by Marie Seeberger
In the Forests with her mother

William Ann takes after her father in appearance, and is already taller than her mother by fourteen. She often complains of awkwardness or being too tall, but Silence thinks that these attributes imply that William Ann will be beautiful.[1]

On the night Silence spotted Chesterton Divide in her waystop, William Ann prepared a half dose of fenweed for the men, and convinced her mother to let her come along to track them down. She helped her mother to kill Chesterton and his men for their bounty, and to recover the body from Red Young, who later cut them off at the Old Bridge and took her hostage. She was pushed through a Shade by Red after he drew her blood.[1]

Silence rushed her to the waystop and saved William Ann's life--stopping her from being turned into a Shade--by pouring a mixture of powdered silver and water down her throat and on her face. However, her left side was blackened in the process, leaving her hand and some of her toes in need of amputation.[1]

This article is still missing information. Please help The Coppermind by expanding it.
Retrieved from "https://coppermind.net/wiki/?title=William_Ann_Montane&oldid=174869"
Categories: