A Smedry Talent is a form of magic where the user changes the world in strange ways. The only people known to possess such Talents are members of House Smedry and their spouses.[1] The Talents are notoriously hard to control and are known to 'get away' from their users, often to dramatic and hilarious effect. 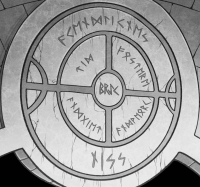 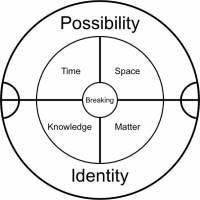 by user: WireSegal
The translation of the Incarnate Wheel in Allekatrase's tomb

The Incarnate wheel is a way of breaking the talents up into groups. Our first introduction to it is when Kaz explains it to Alcatraz in the second book. It's basically a circle divided into four quadrants for the different talents--Time, Space, Physical-World, and Knowledge.

The more powerful, or 'pure' a talent is, the closer it's placed to the center of the wheel. Talents that are vague are more powerful than talents that are specific. For instance, Australia can "wake up ugly" (change her appearance) for a short time after she wakes up, provided she fell asleep thinking about someone. It's very specific, so it's close to the edge of the wheel. Other Smedrys in history had been able to change their appearance whenever they wanted, not just when they woke up, so they would be placed closer to the center.

When Kaz explains the wheel to Alcatraz, they get into a discussion about where the breaking talent that Alcatraz has would be placed. Kaz said that's a matter of dispute, with some saying it's just a physical-world talent, others saying it's something more that affects all four areas, as there are legends of Alcatraz the First breaking time and space.

Alcatraz later finds an Incarnate wheel in Elder Futhark made by the Incarna themselves while in Allekatrase's tomb, and the Breaking Talent is placed at the very center of the wheel. This wheel is mirrored from the wheel Kaz showed to Alcatraz. It also has two additional named sections, Possibility and Identity, which Kaz calls "classical philosophy" and "metaphysics." It also has four, smaller, unlabeled sections on the sides.

Alcatraz speculates that each talent is an offshoot of the Dark Talent.

Parallels have been made between Silimatic Glass, Lenses, and the different Talents the Smedry family has. For example:

The Incarna created the Smedry line as a power source for their glass and culture. The Smedrys can charge any kind of glass with this power inside them. How Talents are similar to Lenses is not a coincidence, and might be a way to funnel off a Smedry's energy. Once the Talents left, the Smedry Power had nowhere to go, eventually building up to the point where every piece of glass touched by a Smedry was over-energized. How the Incarna people gave out Smedry Talents is still unknown, but likely involves the Worldspire.[17]

This article is still missing information. Please help The Coppermind by expanding it.
Retrieved from "https://coppermind.net/wiki/?title=Smedry_Talent&oldid=126577"
Categories: