This page or section needs to be updated with new information for Bastille Versus the Evil Librarians!
Be aware that in its current state, it may not include all additional content yet.

“Someone gave me a pink dress once. I burned it. ”

Bastille Vianitelle Dartmoor the Ninth is a knight of Crystallia and princess of Nalhalla.[3] 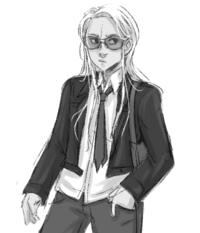 Bastille has long silver hair[4] and typically wears Warrior's Lenses and a glassweave uniform.[5] Alcatraz notes that her hair is naturally red,[6] like that of her father and elder brother.

Bastille is short-tempered and rather prone to violence. She tends to act as the voice of reason because she spends most of her time surrounded by reckless Smedrys, but she has her fair share of impulsivity and is extremely brave. She is also a bit insecure because of her parents' high standards and often doubts her own worth as a Crystin, though she projects an aura of confidence. She dislikes sharing personal information.[7]

As a Knight of Crystallia, Bastille has a fleshstone which grants her enhanced physical abilities and connects her to the other Crystin. She is trained to fight with a sword and dagger. She can use Warrior's Lenses, and has extensive knowledge of Oculatory Lenses.

When she was young, Bastille wanted to be an Oculator and studied different types of Lenses.[8] She eventually accepted that she could not be an Oculator and began training to be a Crystin like her mother. She excelled in her training and completed it at a young age. In a move maneuvered by Archedis, she was assigned as Leavenworth Smedry’s personal Knight, because Archedis wanted a greater chance of Grandpa Smedry dying.[9]

“Another Smedry? I have to protect four of you now? ”

When Grandpa Smedry rescued Alcatraz and planned a raid on the local library, Bastille was annoyed that she had to protect an extra Smedry, and that Grandpa Smedry had planned a dangerous library infiltration without informing her. She drove Alcatraz to the library while he filled her in on the mission.[3] Bastille used her knowledge of Oculatory Lenses to help Alcatraz take a read of the library, but evaded Alcatraz’s questions about how she knew so much it. After Sing Sing Smedry made a distraction, they slipped into the library. Bastille went with Alcatraz and Sing to try and find the Lenses of Rashid.[10] During their search, Bastille explained a lot about the real world to Alcatraz, informing him of the depth of the Librarian lies. They came across A Dark Oculator, Radrian Blackburn, who knocked them out with one of his Lenses.[11]

“I can’t believe how stupid I am! I should have realized Alcatraz would have an aura. It was so obvious! I was sloppy. I just… have trouble thinking of that idiot as an Oculator.”

—Bastille annoyed with herself after getting captured[12]

They were thrown into a dungeon, and Grandpa Smedry and Quentin were captured to be tortured. Bastille was angry with herself, accepting the blame for being captured. After Alcatraz made his prison guard angry to try and trick him, Bastille grabbed the guard and knocked him out, then freed them. On their way to free Grandpa Smedry and Quentin, they fought an Alivened, Bastille fighting one bravely. In the battle, Alcatraz broke her Crystin sword with his Talent.[13] Bastille and the others distracted Blackburn and freed Grandpa and Quentin. Blackburn followed them, and dueled with Grandpa Smedry. When Blackburn won, Librarian thugs took Bastille captive, though she fought valiantly against them using only a crystal dagger.[14] When Alcatraz tricked Blackburn and blinded him, the thugs holding Bastille captive fled, and Bastille resisted the urge to chase them down. They subsequently caused more chaos and Bastille escaped the library with the others.[15]

This article is still missing information. Please help The Coppermind by expanding it.
Retrieved from "https://coppermind.net/wiki/Bastille?&oldid=167615"
Categories: