This article or section needs several citations
Please add references to chapters or other sources which explain these facts
This article is about the character. For the book series, see Alcatraz Versus the Evil Librarians (series).

Alcatraz Smedry is the protagonist and narrator of the Alcatraz Versus the Evil Librarians series. 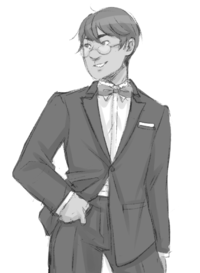 Alcatraz is a thirteen year old boy with dark brown hair. His most notable clothing item is a green jacket, which is destroyed in during the Siege of Mokia.

It is difficult to get an accurate sense of Alcatraz's personality, as he intentionally alters how he portrays himself as a way to get the reader to hate him. Despite this, it is fairly obvious that Alcatraz is protective of people he cares about, as evidenced by his willingness to risk his life for Bastille as the series goes on.

He is also clever, being the first to manipulate the Smedry Talents (specifically Grandpa Smedry's and Aydee's) in ways that go against their natural behaviors. In addition, as he gets to know Bastille and his Family, he comes to understand himself well enough to realize that he pushes people away because he is afraid of getting hurt.[3] This allows him to open up more and form bonds with his family that he had not had before.

Aside from this, he is an incredibly unreliable narrator, given to manipulating the words and behaviors of the people around him in order to fit his narrative. Given to tangents and rambling, it is best not to take anything he says at face value, especially because his stated purpose for telling his story is to convince the people of the Free Kingdoms that he is not the hero they believe him to be.

Alcatraz has the Talent of breaking things due to his Smedry status. He is also a very powerful Oculator, and has shown the ability to manipulate silimatic glass in addition to Oculatory Lenses. He is excellent at noticing small details and thinking on his feet.

Alcatraz was left to the Hushland's foster care system when he was very young by his father, and spent most of his life being passed from home to home, unaware of his lineage or homeland in the Free Kingdoms. Because he has the Talent of Breaking, it was difficult for any family to deal with him for long, and he was often kicked out after accidentally breaking something important to his foster parents. Eventually, he develops a fear of being hurt, and subconsciously breaks things so that he is kicked out before he can form strong emotional bonds.

However, on his thirteenth birthday, he receives a bag of sand in the mail,[4] and meets Grandpa Smedry and Bastille. They teach him about his family and life outside of the Hushlands, and accompany him on a number of adventures, including library infiltrations and stopping the Siege of Mokia.

Alcatraz's father is the famous Attica Smedry, who was missing and presumed dead until Alcatraz rescued him from the Library of Alexandria. He has the Talent of losing things.

His mother is Shasta Smedry, a Librarian belonging to an unknown sect. In the Hushlands, she plays the role of Ms. Fletcher, who was Alcatraz's social worker within the foster care system. Because she is married to Attica Smedry, she shares his Talent of losing things.

His grandfather is Leavenworth Smedry, who rescues him from the Hushlands and is well known in the Free Kingdoms. His Talent is the ability to arrive late to things.

He is the twenty third Alcatraz Smedry.[3] He was named after Allekatrase the Lens-wielder, the first Smedry, who also had the breaking Talent.[5][6]

“So, there I was, tied to an altar made from out-dated encyclopedias, about to get sacrificed to the dark powers by a cult of evil librarians. ”

—Alcatraz to the Reader[4]

“Potatin Potato, grown and made in the fields of Potallia. ”

“Out of the frying pan and into the deadly pit filled with sharks wielding chainsaws with killer kittens stapled to them. ”

—Alcatraz to the reader[8]

This article is still missing information. Please help The Coppermind by expanding it.
Retrieved from "https://coppermind.net/wiki/?title=Alcatraz_Smedry&oldid=153572"
Categories: