“Guiding the ship is a privilege, and the helmsperson is an officer tasked with a serious duty.”

Salay is the helmswoman of the Crow's Song on Lumar.[2]

Like Tress, she had set out in search of someone she had lost: her father. After Tress returned from her encounter with the dragon Xisis, she gave Salay a note indicating her father's location to be Filistrate City.[3] Sometime after the departure of the Sorceress, Salay and her father were reunited, and he took up the post of apprentice helmsman on their ship, the Two Cups.[4]

Salay is a short, dark skinned woman[5] with black, tightly-curled hair and delicate features.[2] Her naval outfit as helmswoman of the Crow's Song is a coat and stiff trousers.[5] She can have a short temper,[6] but is very loyal to her friends and the crew of her ship; she takes the loss of members of her crew very personally and feels responsible for their wellbeing.[1][5] Ann claims Salay is bad at judging people.[7] Salay is also quite courageous, being willing to stand up to Captain Crow[8][6] and to sail the Crimson and Midnight Seas.[9][10]

“It’s the helmswoman’s job to protect the ship. Keep a steady hand, steer clear of danger. Out of storms, away from spore explosions. Keep them safe somehow . . .”

Salay is an expert helmswoman. Her duties include sailing the ship on the spore seas, charting the distances traveled and avoiding storms as well as possible. The helmswoman also traditionally engages the captain of a captured ship.[8] Salay also feels responsible for the welfare of her crewmates in her role as helmswoman.[1] As helmswoman, Salay safely navigates the Crow's Song through battles on the Emerald Sea,[8], storms on the Crimson Sea[11], and through the maze of rocks surrounding the Sorceress's island in the Midnight Sea.[12]

Salay, like Fort, is from the Islands of Lobu in the Sapphire Sea.[2] After her father got in debt, she promised him she would pay off his debts by working as a helmswoman. However, before she returned to pay off his debts, he was pressed into labor by the king's collectors. They left him in an unknown debtor's prison. Passing royal ships who needed crewmembers pressed him into their crews, leaving him in other prisons after they no longer needed him. Salay kept sailing to try to find him.[5]

Captain Crow convinced Salay and the crew of the Crow's Song to become pirates as an alternative to fighting in the king's war.[13] Salay chose to remain on the ship as a pirate to continue to sail, both because of a love of sailing and in hopes of finding her father.[1] Shortly after becoming pirates, Salay and the crew are forced to become deadrunners after killing the crew of the Oot's Dream through Laggert and Crow's machinations. Salay tries to prevent further killing - she stops Crow from killing the crew of a captured merchant ship[8] and agrees to sail the Crimson Sea to avoid raiding more ships.[9] Salay comes to believe Tress is a King's Mask and invites her to a secret meeting with Ann and Fort to discuss how they plan to react to Captain Crow's actions.[6] Once on the Crimson Sea, Salay manages to navigate through a storm, keeping all of the crew except Pakson alive.[11] However, a second storm comes on the crew when the sea is stilled, and Salay is unable to do anything to save them. Through quick thinking, Tress is able to save the ship by growing verdant vines to lift the ship above the crimson spikes until the storm passes.[14] Shortly after this, Ann, Salay, Fort, and Tress meet to plan how to mutiny against Captain Crow. Crow, however, spies on the meeting with Midnight Essence. She sends Laggart to bring them to the deck at gunpoint. Laggert shoots Salay in the thigh and then has Ann and Fort bring her up to the deck. Crow challenges the four to a duel and handily defeats them, stepping on Salay's wounded leg in the process.[15] When Crow takes Tress to the lair of the dragon Xisis, Ulaam applies healing salve to Salay's wound, which helps speed up her healing.[3] 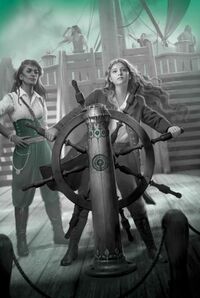 When Tress returns, she gives Salay an envelope with a letter from Xisis, which reveals that Salay's father is currently in Filistrate City.[3] This gives Salay new hope and purpose.[16] She helps install Tress as the new captain of the Crow's Song. Tress is determined to rescue Charlie from the Sorceress, and so Salay sails the ship to the border of the Midnight Sea, where they drop anchor.[17] On the way there, Salay alerts Tress that they had caught Hoid throwing supplies overboard on Huck's orders.[18] Salay tries to convince Tress not to go alone onto the Midnight Sea, but is unsuccessful.[16] Once Tress does not return, she and the crew decide to sail to the Sorceress's island to rescue Tress.[10] After being alerted to the dangerous rocks near the island by Tress, Salay is able to safely sail around the rocks by observing the flow of the spores around the rocks.[12] She, Fort, and Ann bring Hoid to the Sorceress's tower, where they are able to help save Tress and Charlie and to force the Sorceress to leave Lumar.[19] After sailing out of the Midnight Sea, the crew sells the Crow's Song and buys a newer, larger ship - the Two Cups. They also find Salay's father, who becomes the assistant helmsman on the ship. Over the next few years, the crew of the Two Cups, including Salay, become quite wealthy due to their ability to trade through the Crimson and Midnight Seas.[4]

This page is probably complete!
This page contains most of the knowledge we have on the subject at this time.
It has yet to be reviewed.
Retrieved from "https://coppermind.net/wiki/Salay?&oldid=176114"
Categories: