“It might be said that [Charlie] had a way with words. In that words often got away from him. ”

Charlie is a citizen of Diggen's Point on Lumar, and son of the island's duke.[1]

Charlie has soft, un-calloused hands and neatly-cut hair, both of which tip Tress off to the fact that he's the duke's son. He is a genuine, endearing person and smiles a lot.[1] He's fiercely protective of Tress, going so far as to have Hoid throw the Crow's Song's food overboard to prevent her from reaching the Sorceress's island.[2]

According to Hoid, Charlie is an "excellent" valet, but only passable at storytelling and musicianship.[3]

When Charlie displays romantic interest in Tress, he is shipped off the island by his father to find a suitor among the nobility instead.[1] Hoping to come back to Diggen's Point empty handed to be with Tress again, Charlie sabotages his meetings with the princesses by boring them with anecdotes and throwing up on one who was deaf. The duke catches on to Charlie's plans and has him sent to the Sorceress to be rid of him.[4] The Sorceress then curses him, which turns him into a rat; the curse can only be broken if Charlie brings Tress to the Sorceress to be cursed.[5][3] 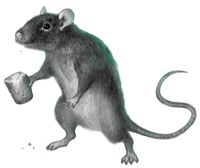 Charlie tries to go back to Diggen's Point as a rat, stowing away on the Oot's Dream. He's caught eating their rations, and is captured and put in a cage in the ship's hold.[6] Tress happens to be put there as well, and when the Crow's Song attacks the Oot's Dream, sinking it, she rescues Charlie from his cage. Since, due to his curse, he can't tell her that his name is Charlie, he tries to say "Chuck," but it comes out as "Huck."[7][8] The seethe stops, and Tress carries Charlie on her shoulder and they walk together to the Crow's Song, climbing on board.[9]

On the Crow's Song, Charlie mostly sits on Tress's shoulder, making observations and helping her figure out the crew's secrets. After Tress discovers the forecannon's hidden compartment, Charlie catches Laggart sneaking cannonballs into his pack.[10] Tress asks him to spy on Laggart's private conversation with Crow, which he does, and insists on reenacting it with Tress.[11] Laggart and Crow notice Charlie spying on them, and when the Crow's Song stops at Shimmerbay, they get a cat to fend him off, which he becomes terrified of.[12] He tries to pressure Tress to leave the ship and abandon the crew, but she disagrees, and he reluctantly stays on the ship with her.[13]

Hoid tries to tell Tress and Ulaam that "Huck" is important, but Tress comes to the wrong conclusion after Ulaam tells her about familiars, figuring that "Huck" is a normal rat that was Invested by the Sorceress.[14] Charlie denies this, but after more questioning from Tress, he's able to exploit a loophole in his curse to explain to her how the Sorceress's curses work.[15]

When Tress uses the Luhel bond to transfer her consciousness to Midnight Essence, she quickly becomes dehydrated and Charlie saves her life by pulling her waterskin towards her with his teeth.[16]

To deter Tress from continuing towards the Sorceress's island, Charlie tells her about the trials she'll have to face when she gets there, saying that he knows about them from the "rat population" of a port the Crow's Song stopped at, but it doesn't work and the Crow's Song continues onwards.[17]

After Tress becomes the captain of the Crow's Song, she introduces Charlie to Fort, Ann, and Salay. All of them adore him; Ann offers to make a cage for the cat, and Salay has a tiny pirate's hat made for him. Charlie also tells them that he knows a way into the Sorceress's tower.[18] Unfortunately, their opinion of him is almost immediately soured, since he has Hoid throw some of the ship's food stores overboard in a desperate attempt to get Tress to stop pursuing the Sorceress. This doesn't work either, since the crew can just eat verdant vines; Tress decides she can't trust "Huck" anymore, locking him in a cage.[2]

Charlie begs Tress to take him with her when she goes to meet the Sorceress. She reluctantly agrees, and the two take a small rowboat into the Midnight Sea.[19]

Charlie tells the Midnight Essence that it has free passage into the Midnight (because of his curse). The creatures capture Tress and take her and Charlie to the Sorceress's island, which makes Tress believe that Charlie is a familiar of the Sorceress.[19][20]

Tress and Charlie climb the tower; they meet Riina at the top, who trades an illusory version of Charlie to Tress for two cups. The real Charlie is disappointed that Tress couldn't figure out who he was and leaves, but after Tress talks to the illusion, she knows it's not him and quickly deduces that "Huck" must actually be Charlie.[5] Charlie starts crying, bemoaning the fact that he couldn't protect her from Riina.[8]

The Crow's Song shows up at the tower, and Charlie runs to open the door so that they can bring Hoid inside the tower.[21] Riina's cat corners him, so he runs inside Tress's pewter cup, letting the cat toss him down the stairs and to the door. Charlie gets it to open, and Hoid enters just in time to save Tress from being cursed by Riina, who leaves Lumar.[22]

Hoid changes the parameters of Charlie's curse so that instead of bringing Tress to the Sorceress's home to be cursed, he had to bring Tress to her home to be versed (to have a poem written for her). He fulfills this easily, turning back into a human. When Tress sells the Crow's Song and transfers its crew to a new ship, the Two Cups, he joins the crew as a valet, storyteller, and musician.[3]

This article is a stub. Please help The Coppermind by expanding it.
Retrieved from "https://coppermind.net/wiki/Charlie?&oldid=176787"
Categories: