“There is precisely one being I fear on this planet. ”

—Xisis in reference to Riina[2]

Riina, also known as the Sorceress, is a member of the Ire and was a resident on Lumar considered one of the most dangerous people on the planet.

“In her case, in lieu of a soul, the woman had pure ice. Kept cold and frozen by her heart.”

In the Cognitive Realm of Scadrial, Riina was a withered husk[4].

On Lumar, Riina appears to be a woman in her fifties (when she gained the ability to stop aging) who is short and plump. Like most Elantrians, she dislikes makeup as she thinks it takes away from the effect of her glowing skin.[4]

“You’re going to have quite the curse, I’ll tell you. I’ve been saving this one for a special occasion.”

Riina is known to be unusually cruel. She curses anyone who enters her domain and survives, as well as anyone who attempts to talk to her.[5][1] She personally delights in coming up with cruel curses, spending her spare time coming up with new ideas for them.[1] As part of this she also ensures that the cursed individual is aware of the full details of the curse, but also are incapable of talking about it with others and thus unable to ask for help. This is done intentionally on her part in order to make the curse crueller for the afflicted.[6][7] All those who have met her attest to her being a cruel and heartless individual.[7][3] Even Xisis considers imprisonment under him to be a mercy when the alternative is meeting Riina.[2]

She also seems to enjoy the reputation of the Sorceress. Despite it being unneeded, she is known to speak in rhyme whilst placing a curse on someone.[7][4] At the same time, she shows a certain level of disdain for those on Lumar, as she considers folklore about her to be funny nonsense[4] and dismisses their technological achievements.[4]

Riina herself, like most Elantrians, is known to be very cautious and not being willing to take any risks that may involve her dying. This was a motive for her arriving to Lumar, a system where she did not think she could be opposed and whose technology was vastly inferior to her own, when faced with a force that actually has a chance of stopping her she retreats.[4][1] Even the knowledge that a dragon is on the same planet as her is enough to spook her.[1] Riina is paranoid to the extent that she keeps vats of acid near by on the of chance that a Kandra will try to act against her in some way.[4] Despite this caution however Hoid considered Riina easy to manipulate.[1]

She believes that spaceships should have sliding doors.[4] 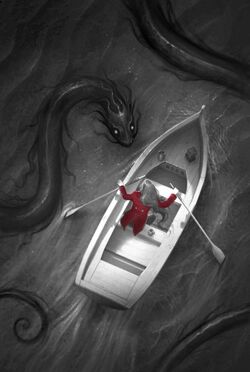 Riina is an Elantrian and Awakener. Riina is also capable of using AonDor in order to grant curses to others.[8][9] How exactly these curses are formed is unknown however the person given the curse is aware as to what the stipulations of the curse are.[6] When placed upon someone a requirement is made to break the curse, other than meeting this requirement there is no way to break the curse, not even Riina herself can achieve this. The curse itself however can be altered by other elantrians.[10] An aspect of the curse is always consistent which is that the cursed individual can not discuss the curse with others, any attempt to do so leads to them stuttering.[6] The curses are flawed however in that since they can not be changed they can be manipulated if one finds a way to do so that Riina failed to prevent,[7] one way to do so is by identifying what an individual can not talk about. This indirectly reveals aspects of their curse.[11]

She is capable of investing common animals to grant them self-awareness, making them her familiars.[12]

Other beings in the Cosmere also fear Riina, one of which is Xisis who considers imprisoning people to be a mercy when the alternative is for them to face the sorceress. He himself fears to confront her.[2]

In the role of being the Sorceress she had an army of some sort, most probably her metal soldiers and midnight essense. Her army had gone to war against the Emerald Sea multiple times in the past with the Emerald Sea losing the conflict each time. Even during peace time her forces were known to go on raids against the kingdom.[8][13] This army also apparently contains ships, of which only hers can sail with any others being destroyed by her forces.[5]

In the case of midnight essence they are formed when rain hits the spores in the Midnight Sea. Upon being spawned these beings fell under her command and followed her wishes.[14] In order to achieve this goal she managed to set up a way to continuously grant water to the monsters formed by the midnight essense.[15] She also possesses an army of awakened soldiers, these troops are awakened constructs and immune to almost all weapon fire on Lumar.[15] A single reptilian humanoid also is under her command.[3]

She was among the five members of the Ire that set out on an expedition to try and capture Preservation's Shard. She rode on horseback and carried a decoy version of the Ire's orb. She abandoned the expedition with the rest of the group when Kelsier used Alonoe's robes to make it appear that she had disintegrated.[16]

Many years later Riina came into the possession of a spaceship and used it to travel to Lumar. She chose Lumar because she believed that the planet was unimportant and that none of its inhabitants posed a threat to her.[1][4] Whilst there, she set up her defences and eventually became known to the planet's inhabitants. Over the years, she earned the title of Sorceress. Under this name she cursed or killed anyone who dared visit her island in the Midnight Sea, inspiring fear among the population.[1][8]. The kingdom on the Emerald Sea, and possibly others, attempted numerous wars against her and her army but each ended in failure.[8][13] This led to further raids launched by Riina against the kingdoms.[8]

Eventually Hoid noticed Riina's presence on the planet and decided to approach her. For a long time Hoid had desired to become an Elantrian and learned that the only way to achieve this was to be invited to become one. He decided that Riina was someone who could make this happen. Hoid travelled to her island and made a bet with her, stipulating that he would allow himself to be cursed on the condition that if he broke the curse, he would become an Elantrian. Riina agreed to these terms and cursed him, causing him to lose most of his mental faculties. The only way for Hoid to break the curse was for him to re-enter her tower.[1] Over the ensuing years, Riina kept an eye on Hoid, but never felt worried that he would actually break the curse.[18]

Following her curse of Hoid, the Sorceress continued her raiding of the Emerald Sea. Due to these pressures the king eventually began to consider it necessary to wage war against the Sorceress. In order to justify this, he began seeking out more support for a war among the populace.[8][13][19] As part of this effort, he sent Charlie to Riina with a marriage proposal under the guise of that this arrangement would be a path toward peace. In truth, he expected the Sorceress to harm Charlie, giving him the ammunition he needed, as well as popular support, for a war.[8] Upon Charlie's arrival, Riina ordered her troops to take him to his tower. Whilst there, she sent a ransom to the king demanding he hand over souls of the Royal family for the freedom of Charlie. Whilst waiting for his response, she and Charlie talked for a time and she learned of his love for Tress. When it had become clear that the ransom would go unpaid, Riina elected to curse Charlie, turning him into a rat. She set the terms of breaking the curse to be for him to bring Tress to the Sorceress to be cursed herself.[8][3] Following this, she allowed him to leave and began further raids against the Emerald Sea.[13]

For the next few months, Riina would largely ignore the outside world and focus solely on the activities of Hoid and Charlie on the planet. At some stage she managed to hack into Fort's translation device allowing her to see and hear what he did. This served as an easy way for her to keep tabs on the crew of the Crow's Song and Hoid himself.[4] Hoid speculates that it was around this time she grew worried that he might actually make good on his bet and so began work to sabotage him further.[3] Eventually, by happenstance, both Charlie and Tress arrived on the boat and Riina was able to keep tabs on them as well.[4][9] She watched Tress' journey to the midnight sea, and eventual capture by the Sorceress' midnight essence.[20]

Upon arriving, Tress attempted to barter for Charlie. Riina played along, attempting to pass one of her spies off as Charlie using lightweaving. Tress was about to leave the tower with the fake Charlie when she realized the ruse and turned back to confront Riina, who then explained the full details of Charlie's curse to Tress.[3] While having this conversation with the pair, she failed to notice the crew of the Crow's Song arriving at the island. Riina became distracted attending the defense of her island, giving Tress and Charlie the opportunity to use her computer to communicate with Fort and Salay. During their conversation, Tress realized the nature of Hoid's curse. Knowing that Hoid's curse would be broken if he reached the tower and that he could potentially defeat the Sorceress, she instructed Salay, Fort, and Ann to bring Hoid with them to the tower.[21]. During all of this, Charlie had been trying to reach the door of the tower, but the Sorceress' cat had been making that impossible. As Salay, Fort, Ann, and Hoid finally arrived at the base of the tower, he told Tress to distract the sorceress as he made a last ditch effort. Tress did distract the Sorceress, and the Sorceress began to prepare a curse for Tress using AonDor. Just as the curse was about to transform Tress, Hoid burst into the tower and blocked it with his own AonDor spell. After a brief conversation, Riina offered to let the crew leave the island. Tress refused and instead demanded Riina herself leave the planet for her crimes against the inhabitants of Lumar. Riina dismissed this threat until Tress ordered Hoid to help and he indicated that he would. Riina weighed her odds and decided to comply with Tress' order. After Tress and the crew left, she departed the planet in her tower, which was also a spaceship.[1]

This article is still missing information. Please help The Coppermind by expanding it.
This article was complete and reviewed prior to Tress of the Emerald Sea, but now needs to be updated.
Retrieved from "https://coppermind.net/wiki/Riina?&oldid=177301"
Categories: