The Heraldic Epochs is a period in history of Roshar that preceded the Era of Solitude.[1] It's sometimes known as the Silver Kingdoms Epoch.[2] 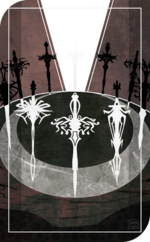 The Heraldic Epochs began with the conflict between humans and Singers, when the latter decided to ally with Odium.[3] To combat this, Honor chose ten Heralds, thus forming the Oathpact.[4] In short, the Oathpact stated that as long as the Heralds were on Braize, Odium could not start another Desolation; to combat this, he tortured the Heralds until at least one of them broke. A single such cycle - a period of peace punctuated by a Desolation - was a single Heraldic Epoch. As each time, the Heralds broke faster, the Epochs grew shorter and shorter, with the initial ones separated by over a century, while the very last were only years apart.[5] In total, there were somewhere between fifteen and fifty Desolations.[6]

Though initially only the Heralds had the access to Surgebinding, eventually the spren sought to mimic those powers and began bonding humans.[7] Initially, those new Surgebinders were unorganized and uncoordinated, with some even turning on fellow men.[8] Sometime during the reign of Nohadon, the Herald Ishar imposed order on them, leading to the formation of Knights Radiant.[9] Henceforth, the Knights would battle the Desolations alongside the Heralds.

The city of Stormseat was destroyed by unknown means during one of the Desolations, leading to the formation of the Shattered Plains.[10] Sometime after, a legion of Singers was sent there for unknown reasons and chose to defect, becoming the Listeners.[11]

The Heraldic Epochs came to an end with the Last Desolation, or the Aharietiam. At the end of that Desolation, only the Herald Taln was dead. The other Heralds decided to leave the Oathpact, theorizing that one of them would be enough to keep it functioning, and abandoned their Honorblades, then told mankind that this day marked the final victory over the Voidbringers.[4] With them vanishing - supposedly to battle in the Tranquiline Halls, while in fact they simply went into hiding - Roshar entered the Era of Solitude.[1] 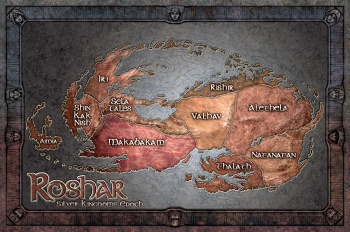 by Isaac Stewart
The Silver Kingdoms

Though the Heraldic Epochs are considered to be Roshar's golden age, in truth they saw a period of significant civillizational decline.[12][4] Each Desolation brought with it a vast loss of knowledge and technical know-how, to the point where the Heralds would leave mankind with the knowledge of forging bronze and return to find them in stone age.[4] With every return, they had to re-teach mankind a number of important skills.[13]

It's possible that this was not merely an accident of constant war, but a deliberate effort by Odium, as the Unmade Yelig-Nar is mentioned as deliberately targeting wordsmen, the literate people of Nohadon's era.[8] Even the periods between Desolations were fraught with peril, as creatures such as Midnight Essence were a constant threat.[2]

Politically, Roshar was divided into ten Silver Kingdoms. Each Kingdom had its own purpose in the Desolations, and each had its own Oathgate leading to Urithiru, the seat of the Knights Radiant and the functional capital of the world at the time. Those kingdoms were built by the Heralds and, at least according to myths, led by them.[1] However, smaller countries appear to have existed as well, such as Eiliz and Tarma;[8] whether they were vassal states to the Silver Kingdoms or independent nations that weren't recorded in history is unclear.

On Roshar, Heraldic Epochs are fondly remembered as the times that Heralds steered the course of the world and men were bound by honor.[12] Great men of that era, such as Nohadon, are revered even in the present day.[14]

One of the primary tenets of the Vorin religion states that at the end of the Heraldic Epochs, the Heralds had pushed the Voidbringers back to the Tranquiline Halls and were fighting to force them out of there as well. According to Vorinism, there were one hundred Desolations, including Aharietiam.[1]

This article is still missing information. Please help The Coppermind by expanding it.
Retrieved from "https://coppermind.net/wiki/?title=Heraldic_Epochs&oldid=132333#Culture"
Categories: