Tet Wikim Davar is a lighteyed Veden on Roshar, son of Brightness Davar and Lin Davar.[1][2]

His siblings include Helaran, Balat, his younger twin Jushu, and Shallan. 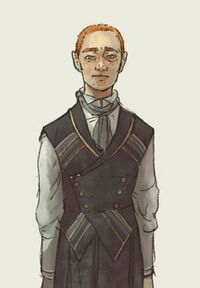 Wikim Davar is the older twin and third son of the Davar family. Wikim is slender, pale, spindly, and with sunken eyes.[3] His hair is cut so short he almost looked like an ardent.[4] He shares some resemblance to his twin Jushu, but they would not be mistaken for one another.[3]

After his mother's death Wikim probably suffers from depression: he is so thin he looks sickly, he rarely talks or smiles, and he has suicidal thoughts.[4] Shallan helps him get out of the depression by pushing his interest in math.[3] After this, Wikim starts laughing again and becomes more interested in his studies. He even talks of becoming an ardent.[5][6] He is not the affectionate type and always complains about hugs.[7] One of his prominent personality traits is that he is thoughtful.[8]

Wikim likes math and seems to be proficient at it. He also seems to have biology knowledge, as he knows the effects of blackbane.[3] After his father's death, he takes care of distracting creditors and seems to be able to keep them at bay for some time; this means he does have some political abilities.[9] 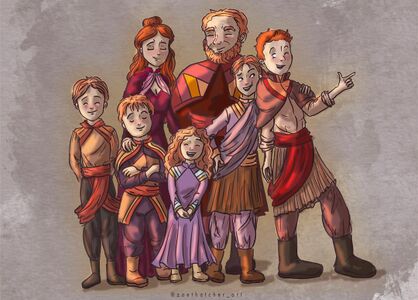 When Wikim was younger, his mother wanted him to be an ardent.[3] After her death, he fell into depression, being a constant target of his father's anger. He would rarely speak, or even smile, and would stay long times staring at fires or walls. He did resent his father and when the highprince sent his bastard son to their house seeking for people who would speak against him, Wikim asked Shallan to do so.[4]

At the Middlefest Fair he decided to stay in the carriage, where Shallan went to visit him. Wikim saw through her and openly asked about her tricks for making all her brothers feel better. After stating that no woman or sword would do the trick with him, Shallan gave him math problems that she had spent lots of time creating for him. Though he dismissed the effort and her, making Shallan feel miserable, he ended up taking a pencil and trying them with a smile on his face.[3]

After that day, he slowly came out of his depression. He almost always had math problems with him, at which his father first railed, but the ardents stood up and said this was the Almighty's wish. Wikim started laughing again and even talked of becoming an ardent himself. One day, he thanked Shallan for her help and gave her a pouch with blackbane. He explained this plant would paralyze and even stop breathing; he had it because he had been thinking about suicide, but didn't need it anymore. He also explained the plant would become more powerful with time.[5]

The day Balat was going to run away with Eylita, Wikim was the one to let him know his father had summoned her to their house. Along with Jushu, he stayed at the door of the feast hall while Father and Balat argued. They ran in when his father went to the floor paralyzed, thinking he was dead. Shallan explained she used the pouch he had given her years ago. Wikim was the one who found out he was still alive and stepped back. Shallan had to step in to finish the job.[10]

After his father's death, and while Shallan tried to steal Jasnah's Soulcaster, Wikim helped Balat with their house affairs. His role was to keep the creditors distracted.[9]

“I was wrong. About what you're doing. I see through it. And... and still it’s working. Damnation, but it’s working. Thank you. ”

Shallan spends much of her time trying to make her brothers feel better. In the case of Wikim, she spends time preparing math problems for him.[3] This helps him get out of his depression, and he expresses his gratefulness by giving her the pouch of blackbane he doesn't think he needs anymore.[11] Shallan loves him very much, and seeing him smile makes her feel warm inside.[3] He does love her back, but complains when she shows him affection.[7]

Wikim's father, just as he does to his other sons, screams at and mistreats him.[1] Although Wikim hopes to become an ardent, Lin likely would never allow him to, as he feels that in the absence of Helaran and Balat, Wikim is the best one to lead the house.[6] His father opposes his interest in math until he is convinced by his ardents that the Almighty approves of his interest.[5]

This article is still missing information. Please help The Coppermind by expanding it.
Retrieved from "https://coppermind.net/wiki/?title=Wikim_Davar&oldid=168515"
Categories: