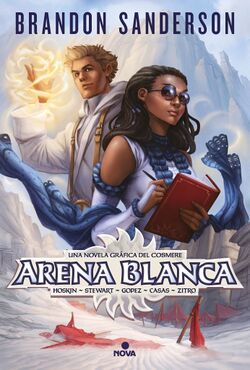 White Sand is a trilogy of graphic novels based on a story written by Brandon Sanderson, adapted by Rik Hoskin. A number of different artists were used, with each volume having its own lineup. Volume One was drawn by Julius Gopez, colored by Sophie Campbell, and lettered by Marshall Dillon. Volume Two was split between several artists; chapters one through five were drawn by Julius Gopez and chapter six was drawn by Julius Ohta, chapters one and two were colored by Morgan Hickman and chapters three through six were colored by Salvatore Aiala Studios, lettering for the whole volume was done by DC Hopkins. Volume three was drawn by Fritz Casas, colored by Salvatore Aiala Studios, and lettered by DC Hopkins. It is set on the planet of Taldain and is a part of Brandon Sanderson's cosmere universe. The first volume was released on June 28, 2016. White Sand is, chronologically, the earliest book in the cosmere sequence.[1]

The books in the trilogy are:

White Sand is based on Brandon Sanderson's unpublished eighth novel of the same name, which is itself a complete re-write of his very first book.

This meta article is still missing information. Please help The Coppermind by expanding it.
Retrieved from "https://coppermind.net/wiki/?title=White_Sand_(series)&oldid=168015"
Categories: