From The Coppermind
Revision as of 11:21, 10 August 2019 by Rasarr (talk | contribs) ("Prayer" fits better into the section on beliefs rather than culture)
(diff) ← Older revision | Latest revision (diff) | Newer revision → (diff)
Jump to navigation Jump to search

Vorinism is the one of the primary religions of Roshar. It is most prevalent in Alethkar, Jah Keved, Kharbranth and Natanatan, known as Vorin kingdoms,[1] and becomes less common further west.

In Vorin religion, people believe in the Almighty, the force of good and creator of mankind. To behold his glory directly is said to be deadly, as anyone who did so would surely be turned to ash.[2] As such, he is typically represented by the divine prism with ten facets, each for one of the Heralds. Each Herald is an emissary of the Almighty, wielding potent magical powers, as well as the ability to respond to prayers and patronage over a specific part of human experience.[3] Vorinism typically places Jezrien and Kalak as the highest among the Heralds, with others beneath them. Occassionally, either of them are conflated with the Stormfather, who in turn is commonly equated with the Almighty himself, although this depends on the particular Vorin country.[4][5] 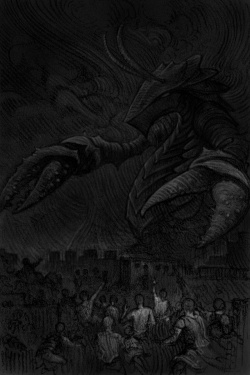 Artistic representation of a Desolation.

The Vorin creation story places mankind's origins at the Tranquiline Halls, a paradise from which they were banished by the Voidbringers, the embodiment of evil led by Odium. While humanity retreated to Roshar, the Voidbringers didn't stop there, coming again and again in times known as Desolations, trying to force them off Roshar as well and into Braize, the Damnation.[6][7]

On Roshar, mankind, led by the Heralds and their chosen knights, fought them off ninety nine times until finally the Aharietiam, the Last Desolation, arrived. Then, the Voidbringers were defeated and cast back into the Tranquiline Halls, while the Heralds followed to force them out of heaven as well.[6] The Knights Radiant were left behind, although they ultimately betrayed humankind in the Day of Recreance. In the modern Vorinism, their powers are considered trickery.[8]

All Vorins are expected to choose a Calling, their greatest talent, and practice it until death. Those who grow to be the very best at their Calling are chosen to join the Heralds in the fight to regain the Tranquiline Halls when they die. Their particular afterlife differs depending on the calling - those who were the very best at farming become farmers for the Heralds, those who are the greatest at battle are chosen to fight beside the Heralds, etc.[9][10][11][12][13] Those who do not achieve their greatest potential are stuck in a limbo-like eternity in a dreamless sleep, while those who do horrible things are cast into Damnation.

In the Alethi variety of Vorinism, warrior is considered the highest Calling, as it leads directly to the fight to reclaim the Tranquiline Halls.[14]

Closely tied to the concept of a Calling is Glory. A Glory is a particular attribute of the Almighty that one is supposed to emulate in the pursuit of their Calling. One typically choses their Glory alongside their Calling, as the two are supposed to work together; for example, the Calling of a warrior and the Glory of determination.[12]

When it comes to relationships, Vorinism is focused on making and upholding oaths. Breaking oaths, or acting without proper oaths, such as having sex outside of marriage, is frowned upon.[15] However, Vorinism offers a wide variety of partnership oaths for those who do wish to pursue relationships, including some for same-sex couples.[15]

Symmetry is considered holy in Vorinism. Among others, glyphs are shaped symmetrically, Silver Kingdoms have perfectly symmetrical names and many people's names are close to symmetrical. However, people who have names that are actually symmetric are looked down on as "too holy" and therefore blasphemous.[16]

Traditional Vorin temples are circular and domed. Usually, the dome is exactly ten feet tall at its highest point. They are often filled with statues and pictures of the Heralds.[12] A major city is expected to have a separate temple for each Herald.[17][18] Additionally, wealthy lighteye families will often have private chapels, and the ardentia maintains monasteries throughout the continent. Such monasteries, like Jokasha, are often seen as highly desirable postings, with many ardents working decades to get into one.[19]

Vorin pray through glyphwards, prayers written in glyphs, typically on a strip of paper, calling on the Almighty and, sometimes, one or more of the Heralds. They are typically burned to carry the soul of the prayer to the Almighty.[20]

In higher classes of Alethkar, much of the religious observation falls to the the priesthood, the Ardentia, rather than the lighteyes themselves. The ardents in the employ of a lighteye are supposed to perform the required rituals for their master, so that the lighteyes do not have to worry about the spiritual aspect of their lives.[21]

The original purpose of the Oathgates has been lost to time, though they are still considered sacred. In the present day, it's believed that the eleven lamps stand for the ten Epoch Kingdoms and the Tranquiline Halls, while the huge keyhole is "the need for ardents to ignore borders, and look only at the hearts of men".[21] 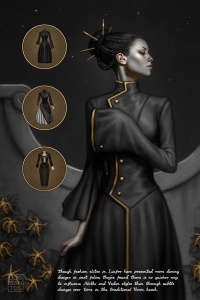 The Vorin religion is closely interwoven with the culture of the Vorin kingdoms, to the point where the same word is applied to both the faith and the culture. Its modern form appears to be based on the book Arts and Majesty, outlining what is proper for men and women. Women are expected to completely cover their left hand (called Safehand in Vorin vernacular) since the age of roughly eleven or twelve, as it is generally considered obscene.[9][22] They are, however, permitted to learn how to read and write, and expected to manage a household and business. More confrontational positions, such as politics and military, are considered masculine - however, men are forbidden (or at least discouraged) from learning the alphabet. Additionally, Vorinism differentiates between feminine and masculine foods (sweet and spicy). Those division between genders do not apply to ardents, who are considered genderless from cultural standpoint, and thus permitted to engage in both feminine and masculine activities. By tradition, every person can learn a trade at a Vorin temple, including those of the opposite gender.[23]

In addition, the Vorin religion justifies the cultural divide between the Lighteyes and Darkeyes, with the former being considered closer to the Almighty and thus more holy, giving them power over the darkeyed masses.[24]

Vorins are sometimes purposefully named after the Heralds - for example, Shallan for Shalash or Kaladin for Kalak.[25]

Apart from cultural and religious aspect, Vorinism has an impact on the legal system, as the teachings of Heralds demand implementation of certain laws.

The Right of Travel

The Right of Travel allows every Vorin citizen of sixth nahn or higher to freely travel between various Vorin lands.[26] Vast majority of darkeyes have this right. Lacking it ties a person to the land they were born in, and usually means that something has gone very badly for their ancestors.[27] However, joining the military automatically forfeits the Right of Travel for the duration of service.[26]

The Right of Travel is derived from the Heralds teaching that all borders should be open.[28] It also serves as a form of addressing the power imbalance between lighteyes and darkeyes, as most darkeyes are able to leave a land that is poorly managed.[27]

The Right to Learn

Most people in Vorin kingdoms have the Right to Learn professions in any temple of the Almighty. Larger Vorin temples have at least one ardent who is an expert in any given art or trade, and they provide training to anyone who's interested, regardless of eye color. This Right may not be available to the lower nahn ranks.[29]

The Right of Challenge

The Right of Challenge allows a distinguished lighteyed warrior to demand justice through combat from the one who wronged him. Though the Right is almost never used in the modern day, it can still be exercised, and is well-known among lighteyes.[30] This Right, however, does not extend to darkeyes, and a darkeye attempting to call on it can be punished with execution.[31]

Vorin priests are referred to as ardents. Ardents join devotaries (sects) based on their beliefs. Both men and women can become ardents,[10] though many of the devotaries encourage women toward the feminine arts rather than studies of theology.[3]

Following the Hierocracy, the ardents are not allowed to own any property of any kind, and are directly owned by lighteyed lords, similar to slaves. However, they have far more rights than ordinary slaves, and can expect respect even from their masters.[11]

Though the heads of the Vorin church are nominally the leaders of Vorin countries, in practice the ultimate authority lies in the hands of the ardents known as the Curates, operating from the Holy Enclave in the city of Valath. They can be distinguished by blue robes and gemstone-covered staves, and have the authority to excommunicate members of the church - including the national leaders - for heresy. This right was given to them by Covenants of Theocracy, which are unspecified, but centuries old.[32]

The Vorin devotaries are groups of ardents and lay members devoted to a particular facet of the religion. As such, they vary greatly in the interpretation of the faith, as well as their nature. Some devotaries are orders that permit their members to live their own lives, while others are monastic. Overall, their chief purpose is to aid in nurturing the believers' Callings. Known devotaries include:

The collective body of ardents from all of the separate devotaries is called the ardentia.

The Hierocracy was a time when the ardents attempted to conquer the world and control the people "for their own good." It is considered the failure of Vorinism.[6] Priests controlled what people learned, what religious paths they followed, and the overall doctrine, claiming that the common people could not understand theology. The higher-ranking members of the ardentia claimed to see visions and prophecy, which directly resulted in prophecy being seen as of Odium after their fall.[12]

These priests were eventually cast down by the Sunmaker in the War of Loss. This directly resulted in the ardentia splitting into devotaries, and the individual ardents becoming lighteye slaves.

This article is still missing information. Please help The Coppermind by expanding it.
Retrieved from "https://coppermind.net/wiki/Vorinism?&oldid=107831"
Categories: