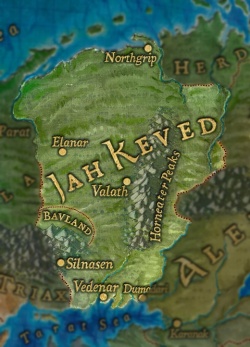 Located in eastern Roshar, Jah Keved is the second largest state on the planet, claiming around 5,553,000 Km2.[2] In terms of real-world nations, this places it between India and Australia in area. It shares its eastern border with Alethkar and Herdaz on three rivers, while in the west, it is bordered by Tu Bayla and Triax. North to south, the country stretches across the entire continent, between the Reshi and Tarat Seas. 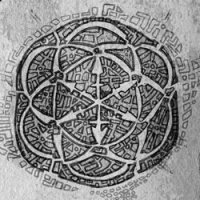 Though king Taravangian pledged himself to Odium, Jah Keved was not part of his deal.[17] However after the Battle of Thaylen Field Taravangian began preparing Jah Keved to switch sides. He did this by promoting people Odium could control, putting his troops into position to betray Dalinar ,and subtly indicating to his followers that the war was a problem for Alethkar and Azir. When Taravangian gave the order the Vedens turned on the Coalition of monarchs and joined Odium.[18] [19] 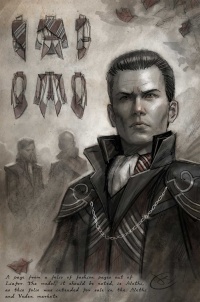 This article is still missing information. Please help The Coppermind by expanding it.
Retrieved from "https://coppermind.net/wiki/?title=Jah_Keved&oldid=175010#War_of_Succession"
Categories: