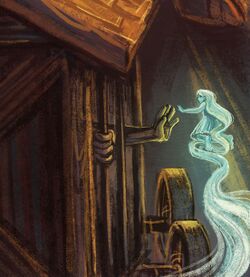 By Sheep A Honorspren in the Physical Realm.
For more information about spren, see Spren.

Among many factors that make Roshar unique among other Cosmere worlds is the overabundance of spren. Spren are small pieces of Investiture that have aquired sentience - and, in some cases, sapience - through the influence of Roshar's living creatures.[1] They are a mix of different Shardic investiture, mainly Honor and Cultivation, and exist mostly in the Cognitive Realm.[2][3] However, they can and will often become partially visible in the Physical Realm, and some transition there entirely.

Three main groups of spren can be recognized. The nature spren correspond to various natural phenomena, such as windspren or flamespren, which appear in the presence of wind and fire respectively. Emotion spren are attracted to emotions, such as fearspren appearing when one is afraid or gloryspren for people who feel intense pride.[3] However, a natural phenomenon or an emotion will not necessarily summon a spren, as they may not be present in the physical place's Cognitive equivalent.

The third group of spren are surgebinding spren. Those spren are all sentient, and have an organized society in the Cognitive Realm.[3] They transition to the Physical Realm only when searching for a prospective Knight Radiant to bond, as the shift robs them of most of their higher functions, which they reclaim through forming a Nahel bond.[4] The surgebinding spren seem to represent higher concepts, such as honor for the Honorspren or truth and lies for Cryptics.

In addition to those, there is a number of unique spren who are far more powerful than others. Among those is the Nightwatcher, who can grant boons and curses; Stormfather, who controls the highstorms; and Cusicesh and Sibling, whose exact nature is currently unclear.

For more information about the Singers, see Singer.

Though once the planet's dominant species, in the Era of Solitude, the singers have been subdued by humans. Majority of their species are Parshmen, singers whose Identity and Connection have been stripped from them by the capture of Ba-Ado-Mishram, rendering them mostly docile and wordlessly obedient.[5][6] The singer culture of old has only been preserved by the Last Legion, or listeners, on the Shattered Plains - the last enclave of the non-Parshmen singers on Roshar - and the Fused, spirits of long-dead singers, on Braize.

Among the listeners, the Fused are considered gods - however, they are also highly dangerous to interact with, and the listeners have fled to what became the Shattered Plains to escape their influence. In the present day, they are ruled by the Five, a council composed of representatives of each form the listeners can assume. History and knowledge are passed down among them mostly in form of songs, set to the Rhythms that all singers can attune to.[7]

Following the Everstorm, the Parshmen's Identity and Connection were restored, returning them to full sentience.[8] The listeners, on the other hand, were all but decimated, first by the storm and then by becomg possessed by the Fused, with only a small group escaping west.[9] The current singer culture, such as it is, is mostly based around following the word of the Fused like gospel; however, the former Parshmen retain some of the qualities of their states of origin - for example, in Azir they attempted to sue the government for backpay, while in Thaylenah, they took to the sea.[10][11] 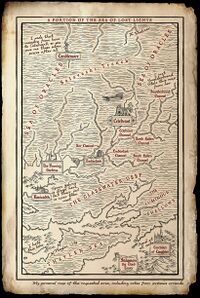 A map showing some of the spren cities in Shadesmar.

Within Shadesmar, the sentient spren have their own countries.[3] Among those is a Honorspren state, with its capital in the city of Lasting Integrity and a number of strongholds, as well as a Highspren country, and a city-state of the Cryptics.[12][13][1] There are also free cities, such as Celebrant, where various spren intermingle. This includes Cultivationspren, which, though ruled by a council called the Ring, do not have holdings of their own.[12][14][15]

As the inversion of the Physical Realm and its supercontinent, Shadesmar is mostly composed of the sea of beads, with a number of narrow peninsulas and islands corresponding to Physical rivers and lakes.[16] As such, travel is done mostly by boat. Merchant and military ships, pulled by teams of harnessed Mandras, traverse the vast spaces between the cities, ferrying goods, news and travellers.[17] Trade with lands outside of Roshar isn't unusual - in Celebrant, one may buy canned food (presumably from Scadrial or some worldhopper settlement) and Nalthian artwork. The price of various items is largely based on their permanence in the Cognitive Realm, with the most persistent objects selling for thousands of broams.[12]

The relationship between various spren kinds appears to have its own share of political turmoil. Several years prior to the Everstorm, the Honorspren tried and failed to conquer the rest of Shadesmar, making the other spren unfriendly towards them. By contrast, Cryptics are generally understood to be unwilling to expand beyond their city; however, they are also widely considered to be uncomfortable company.[18]

After the events of the Recreance, spren have mixed opinions of humans. Honorspren, Reachers and Inkspren are generally opposed to any attempt to restore contact, while Cultivationspren and Cryptics are supportive of new Nahel bonds, albeit cautiously so.