“I control all things that can be grown, nurtured.
That includes the thorns.”

Cultivation is one of the sixteen Shards of Adonalsium.[2] Her Vessel is a dragon named Koravellium Avast,[3][4] though Hoid has referred to her as Slammer.[5] Cultivation resides on Roshar, having originally come there with Honor before Odium's arrival.[6] Cultivation's Investiture is typically associated with the color green.[7]

Cultivation's intent as a Shard appears to be related to transformation. According to Odium, all she wishes to see is change, regardless of where it leads.[8] In her own view, on the other hand, she wishes to grow things and people, and prune them if need be, to shape them in a desired form, even if she accepts that there will always be a degree of uncertainty.[1] 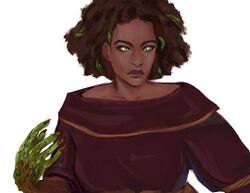 Surgebinding is a magic system derived from both Cultivation and Honor.[9] To Surgebind, a person must bond a spren, which grants them the ability to inhale Stormlight and use it for various purposes, chief among them self-healing and manipulating Surges, the fundamental forces of Roshar.[10] Some Surges are more inclined towards Cultivation, while others are closer to Honor. Additionally, some of the Radiant spren appear to be closer to Cultivation than others.[11]

The spren capable of forming the Radiant bonds are likewise a mix of Cultivation and Honor's Investitures; as such, a Shardblade is a mix of her and his metals.[12]

Old Magic is a magic "system" that appears to be usable only by Cultivation and Nightwatcher.[1] It allows for granting another person a boon and a bane based on their request. The boons and banes can range from physical objects, such as money or swords, to mental alterations, such as making a person see upside-down for the rest of their life, or erasing memories.[1][13] It even permits Realmatic changes, such as granting a new and unique way of acquiring Investiture.[14]

There is more to Old Magic than just boons and banes; however, there is no person currently known to make use of that.[15]

Cultivation has her own form of gaseous Investiture, Lifelight, that is comparable to the Scadrian mists[16], Stormlight, and Voidlight.[17] When visiting the Nightwatcher, Dalinar sees Cultivation surrounded by green mist,[1] which is likely Lifelight.[16] It can both be captured in gems and serve as a power source much like the other two Lights. In fact, Lift's Investiture that she generates by transmuting consumed food is Lifelight and not Stormlight. The power that the Sibling uses, Towerlight, is a mixture of Lifelight and Stormlight.[18]

Lifelight takes up the middle note on the Rosharan tritonic scale.[18]

Cultivation is capable of seeing the future, with Honor mentioning that she is much better at it than he ever was.[2] While certainly one of the better users of future sight in the cosmere, she herself admits that she cannot truly predict everything.[1]

She is capable of creating spren of herself, the chief example of this being the Nightwatcher.[19] This being said, the Nightwatcher is not very humanlike, and so Cultivation keeps her in the Valley to hold court, and grants her the use of the Old Magic.[1] Cultivationspren are also likely tied to Cultivation herself, as they refer to her as "Mother".[14][20]

Something about her presence on Roshar, whether intentional or otherwise, makes it easier for animal life there to attain a degree of sentience, with both Ryshadium and santhidyn being far more intelligent than their peers for this reason.[21]

Cultivation's Perpendicularity is located in the Horneater Peaks, and forms either one or all of the Horneater Oceans, the giant lakes at the top of the mountains. Until the True Desolation, where it was overtaken by the Fused, it was the main way for worldhoppers to travel to and from Roshar.[22][23]

Cultivation appears to have the ability to kill or at least seriously wound Odium, as he refrained from killing the Stormfather out of fear of leaving himself exposed to her counterattack.[24]

by mushimallo
Cultivation, Honor and Odium
For the history of the original Vessel, see Koravellium Avast#History.

“I think there's only one [woman of my age] around these parts, and she and I never did get along. ”

The Shard of Cultivation was created during the Shattering, and was subsequently taken up by Koravellium Avast. She and Honor, with whom she was romantically involved, departed the site of the Shattering, Yolen, and ended up on Roshar.[26] There, they became the gods of a local sentient species known as the singers. However, following Odium's arrival in the Rosharan system, the two Shards ended up siding with human newcomers instead.[24]

Although Cultivation assisted Honor in fighting Odium, Honor still perished.[27] Following his death, Cultivation withdrew in grief, and appeared to have lost all interest in aiding mankind any longer.[14] This was not entirely correct, however -- rather than hiding, she was planning.[28]

In the late Era of Solitude, Cultivation used the Old Magic at least thrice. She granted Taravangian fluctuating amounts of compassion and intelligence, ultimately grooming him to take up the Shard of Odium, which required compassion, and to master its Intent, which required the intelligence. [29] She made it so that Lift's Surgebinding would be powered by Lifelight, rather than Stormlight, though Lift's curse and boon are not known.[30][31] She also intervened when Dalinar Kholin came to see the Nightwatcher and beg for forgiveness. Instead of this, she made him forget his wife, which served as both a boon and a bane.[1]

Unlike with all other boons and banes, Dalinar's memories gradually returned after the arrival of the Everstorm.[32] This was deliberately engineered by Cultivation to give him time to come to terms with his past before Odium would try to use it to turn Dalinar into his champion.[33] 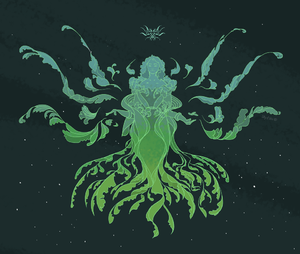 “Storming Mother of the World and Father of Storms above! ”

Cultivation has been honored on Roshar for a long time, at least since the era of the Knights Radiant.[35] In the present day, however, her worship is limited to the western part of the continent, where she is considered an embodiment of nature and nature spren.[36] There, she is sometimes referred to as Mother of the World.[34] Even in the east, people sometimes make references to Mother Cultivation, though typically as a joke.[37] In Vorinism, belief in her and her cohorts, such as the Nightwatcher, is considered pagan superstition and usually dismissed.[1][35]

Cultivation is also highly revered by cultivationspren. Though the precise relation between them and her is unclear, they often call her Mother or Blessed Mother, and only sometimes by her proper name.[20][38][39] "Mother's vines" appears to be a particular curse related to Cultivation.[40]