“I hate [the other highprinces]. But I try to hate everyone. That way, I don't risk leaving out anyone particularly deserving. ”

Sebarial's princedom lies in southern Alethkar.[4] A large force of civilians and only a minimum of soldiers comprise his commerce-centric warcamp at the Shattered Plains;[2] his is the southernmost warcamp, approximately an hour from Dalinar's via carriage.[5]

Sebarial is plump and bearded. He is outwardly a very obnoxious, rude, lazy, and vulgar man and comes across as a fool, though he is actually quite intelligent and very sly. He avoids publicly showing his interest in Alethi politics, but privately he does pay attention.[6] He typically wears an outfit featuring a takama until some time after the move to Urithiru and his involvement in administration there, after which he begins wearing clothing of a style similar to that of a Thaylen merchant; this could be a result of Palona's influence.[7]

Though Sebarial himself is not very religious, his ardents are quite devout.[8] Likewise, though he himself is useless in battle, he sees to it that his soldiers are well trained. Sebarial's genius is that he knows how to hire the right people for a job.[9] Over time, he proves himself reliable in getting things accomplished. Underneath his flippant exterior, he wants to be useful.[7]

Sebarial is a shrewd, skilled businessman. He successfully maneuvers his way into providing all of the manufacturing and farming needs of the warcamps, earning a hefty profit for himself.[2] [expand]

Sebarial gained his role as highprince sometime before Gavilar managed to unite and take the kingship of Alethkar, and he was noncommittal in his support. The day of Gavilar and Dalinar's battle against Kalanor, Sebarial cited supply issues as the reason he hadn't shown up, but Dalinar knew him well enough to know he was just avoiding choosing a side in the war.[10] Years later, Sebarial attended Gavilar's funeral service and seemed to expect Dalinar, who was known for his drunkenness at the time, to make some kind of disruption.[11]

“You sly eel. While the others fight a war, you’ve been building an economy. ”

Sebarial accompanied the other Alethi highprinces to the Shattered Plains in pursuit of the Vengeance Pact. However, because he recognized that the battles for the gemhearts meant Alethkar would never completely abandon the warcamps, he preferred to focus on building mills, farms, and other manufactories in lieu of participating in plateau runs; his burgeoning economy supported markets, fully constructed tenements, and even lavis fields to the southwest of the camp. His warcamp, reflecting his prediction of Alethkar's semi-permanent presence there, was built much more like a city than any of the others, with straight streets and buildings designed with rounded roofs, corners, and sides to better repel winds from highstorms.[2][5]

After the Assassin in White's first attempt on, ostensibly, King Elhokar's life, the king and the highprinces convened to discuss matters. Sebarial, whose contributions to the meeting were confined to snacking and making pithy remarks, was faced with an unexpected opportunity when Shallan Davar arrived in the middle of the meeting; seeking a way to avoid living under Dalinar's watchful eye, she alleged that Sebarial had been the first to offer her a place to stay on the Shattered Plains. Having observed the way the others had been trying to snatch her up, he claimed a distant relation to Shallan and confirmed her story.[6] After sharing a carriage ride back to his warcamp, Sebarial gave Shallan rooms in his manor and a position as one of his clerks tasked with organizing his personal finances.[2][12]

“I've got a feeling about you, Dalinar old man. I think it's wise to stay close to you. Something's going to happen out there on the Plains, and opportunity rises like the dawn.”

Sebarial spent a fair amount of his time in idleness, avoiding putting his ledgers in order or seeing to other details of organizing his household.[14] He did attend important functions, including Adolin's duel against four other Shardbearers,[15] but was otherwise noted for shirking his responsibilities.[16] Because of this, Dalinar was shocked when Sebarial brought his army to join him on his expedition to Stormseat to end the war with the Parshendi and discover Urithiru.[13] 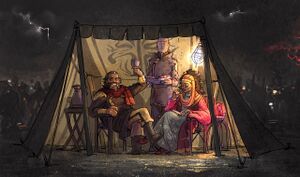 by Marie Seeberger
Relaxing during the battle

Though Sebarial did not partake in fighting personally, he participated in tactical planning sessions as they moved towards the city of Narak.[17] When the battle arrived, Dalinar ordered him to stay in the command tent and gave Teleb command of his army with Rust and Serugiadis, two other Shardbearers, to help him. Sebarial seemed ironically comforted to see through Dalinar's confident front that he had shown the other highprinces.[9]

When it became clear that the Parshendi had successfully summoned an Everstorm and the Alethi knew they needed to get onto the Oathgate plateau, Sebarial managed to organize his and Roion's armies into an orderly march onto the plateau before sitting down with Palona to eat fruit and drink some wine from Dalinar's stores.[18] He and the other survivors moved into Urithiru and shortly sent word to the warcamps summoning the inhabitants to the tower; his warcamp emptied as everyone obeyed.[19]

“I will note that this Desolation of yours is going to undermine years of my business planning.”

After the Battle of Narak, Sebarial was one of the few survivors Dalinar felt he could fully trust. Because of this, Dalinar called him and Aladar to the site when Sadeas' body was discovered by members of Bridge Four. In the ensuing discussion, Dalinar named Sebarial Highprince of Commerce, recognizing his savvy for managing economic matters.[21] Since the battle had decimated the Alethi troops, Sebarial gave most of his army to Dalinar to be integrated into the Kholin army and kept only a single division for himself.[22] He also attended Dalinar and Navani's wedding.[23] Bridge Four later discovered the body of Vedekar Perel, and because he was from Sebarial's army, Dalinar and Navani informed him of the murder and the investigation Adolin was to head.[24]

Sebarial offered Shallan a room with a balcony in his section of Urithiru, which she gratefully accepted, although she often skipped dining with him and Palona and she only had the most rudimentary furnishings.[25] He himself decorated his quarters extravagantly and hired the services of such people as musicians and masseuses.[20][26] Sebarial operated his section much the same as his warcamp, keeping commerce flowing at all hours; in fact, in his position as Highprince of Commerce, he shrewdly understood the merchants' motivation behind their complaints at Navani's plans for an orderly market and tacitly approved the formation of the Breakaway.[27] He also subsidized liquor sales with low taxes and supplied Dalinar with reports on the tower's commerce. Sebarial intended to return some of his labor force to the warcamps in anticipation of trade opportunities there, and he ended up taking control of the surrounding forest,[20][28] although without parshmen he lacked the proper labor force to produce the needed amount of lumber.[3]

Navani organized a meeting of the monarchs at Urithiru, to which Sebarial and Palona were invited. They arrived at the last minute without chairs and immediately found the food table, where Sebarial stood for most of the meeting and inserted several sarcastic remarks into the conversation. Although he had already devised a plan for taxing the use of the Oathgates,[20] Navani gave that responsibility over to Queen Fen instead of to him.[29]

Because Dalinar's restored memories of his actions at Rathalas were so painful he retreated from the public for a while, four of the highprinces--including Sebarial, Aladar, Hatham, and Bethab, who sent his wife in his stead--approached Navani with their concerns. They discussed such problems as the infrastructure of the tower, the lack of supplies and labor, and the business of Dalinar becoming highking, all while making it clear that the heart of the problem was a doubt as to Dalinar's motives and capability. During the meeting, Navani was able to allay their concerns, especially after Sebarial voiced his real question: whether Dalinar's plans were all "secretly a way for him to dominate the world."[3]

Battle of Thaylen Field and Aftermath[edit]

“Oh my. Now this should be interesting.”

Navani and the highprinces successfully kept the tower running until Dalinar was well enough to fill his role again. Dalinar took a small group to Thaylen City to attend the ill-fated meeting of the coalition of monarchs when Taravangian leaked information to each group aimed at undermining their trust in him;[31] during that time, Sebarial remained at Urithiru. He was at the tower when an invasion of Parshendi arrived with the intent of keeping the Alethi from sending reinforcements to the Battle of Thaylen Field through the Oathgate to Thaylen City, and he followed Aladar's lead in pulling troops up higher into Urithiru.[32]

After the battle was won, the coalition met again in Urithiru. While the Kholins discussed who would take over the rule of Alethkar, Sebarial pretended to sleep while Palona delighted herself in recent gossip. Sebarial was pleased that the Kholins chose Jasnah, taking pleasure in the others' looks of worry.[30]

A year later, Sebarial stayed behind at Urithiru to aid with the tower's administration while Dalinar and the rest of the coalition's army went to Emul to take back strategic land. He and Navani watched the army transfer to Azir together, discussing Taravangian and then Palona. As they entered the tower once more, Navani asked him to oversee the old warcamps and bring them completely under the coalition's control. Before leaving, Sebarial brought up the the fact that Palona wouldn't marry him, and Navani advised him to let her see his sincerity.[7]

“If a man takes nothing in his life seriously, it makes a woman wonder. What is she? Another joke? Another whim? ”

Palona is Sebarial's Herdazian mistress. She calls him "Turi." And also sometimes "the idiot." She has a much more active hand in running the day-to-day workings of the manor that Sebarial does. They enjoy witty banter and seem genuinely fond of each other despite their outward griping.[2] Palona perfectly complements Sebarial's dichotomy of outward indolence masking inward cleverness with her own lack of arrogance as she takes full advantage of her wealth.[14] She consistently refuses any offer of marriage, however much Sebarial privately but sincerely wishes her to accept.[7]

“It could be worse... I could be boring as well as expensive. ”

Shallan Davar maneuvers Sebarial into hosting her when she arrives on the Shattered Plains, gambling that he would agree to take her in if he sees it as an opportunity to get one up on Dalinar. He claims a distant relation to her, and she begins calling him "Uncle Sebarial." She also specifies a large weekly stipend of three broams, which Palona ensures that they pay.[6] Shallan cleans up Sebarial's ledgers for him and lures him with information on Urithiru in the event she needs to rely on him to get out onto the Shattered Plains herself.[12] She continues to ally herself with Sebarial while in Urithiru, although she gets involved in her own projects and doesn't do much more scribe work for him.[20]

“Onward, then! To glory and some such nonsense. If we find riches, remember that I get my part! I got here before Aladar. That has to count for something. ”

“Trust a coward to know the smartest way to stay out of fighting. ”

This article is still missing information. Please help The Coppermind by expanding it.
Retrieved from "https://coppermind.net/wiki/?title=Turinad_Sebarial&oldid=159025"
Categories: