Roshone is middle-aged, with a short, grey-streaked beard and an angry expression. He has light yellow eyes that seem to blame everyone and everything for his banishment. He wears a sword and a takama, but appears too old and flabby to be a true soldier, and his weight increases during his time in Hearthstone.[3][4] He dresses out of fashion and wears a wooden foot on his right leg.[5] Though he cares about the outward appearance of his manor, he makes few alterations inside.[6][1]

He is vindictive towards Kaladin's family, and Dalinar Kholin considers him a petty man.[7] By the time of the True Desolation, he seems to soften--perhaps because of guilt.[5]

Roshone doesn't have any outstanding ability or attribute other than being a lesser lighteye with some connections. When he lived in Kholinar, Roshone was one of Highprince Sadeas' sworn liegemen and cousin to important men whose support the Kholin family needed for political reasons.[7] Since being exiled to Hearthstone, Roshone's influence and wealth are greatly diminished. As citylord of a small town, Roshone has no stewardship over any of the highprince's lands and is little more than a first point of contact for higher ranking lighteyes.[1]

Roshone owned several silversmith shops in Kholinar, and used his connection with Elhokar Kholin to further his own interests. He had become a confidant of Elhokar, who was then the crown-prince of Alethkar--in charge of overseeing the country while his father was away at the Shattered Plains. Roshone convinced the prince to arrest two elderly darkeyed silversmiths, his business rivals and Moash's grandparents, on false charges; they died in prison awaiting trial. Upon discovering what had happened, Dalinar initially wanted to strip Roshone of his rank and wealth, but political pressures forced him to instead exile Roshone to "a place he couldn't do any more harm."[7]

“You hid behind the law, sneering at me, surgeon. Well, now it turns against you. Keep those spheres! The look on your face at this moment is worth the price of every one of them!”

Roshone was shipped to Hearthstone as punishment for the deaths of Moash's grandparents in late 1166. He became the new citylord of the town, where the previous citylord, Wistiow, had died.[3] From the very beginning, he suspected that Lirin stole spheres from Citylord Wistiow. He treated Lirin and his family badly, and, under threat of Roshone's bad graces, the rest of the townspeople followed suit.[8] Amid the social and financial pressure placed on Lirin, Roshone invited the man to dine in his manor one evening, in hopes of cutting a deal to recover the stolen spheres. Though there was a debate between Roshone and Lirin, it didn't bring him a satisfying result.[6]

Eventually Roshone and his son Rillir were both badly injured on a whitespine hunt. Lirin, Hearthstone's surgeon, saved Roshone's life but could not help Rillir.[9] After the loss of his son and leg, Roshone became a recluse and his dislike for Lirin grew. With no heir of his own, he made plans to marry the daughter of former Citylord Wistiow, Laral, himself. When Brightlord Amaram, a distant cousin of Roshone, came through the town to recruit during the Weeping of 1168, Roshone took his revenge by deciding that Tien would join the army.[4]

In the years that followed Roshone married Laral, and his treatment of Lirin and Hesina softened. As the man aged, he gave way to Laral to manage most of the house and town's affairs.[5][1] 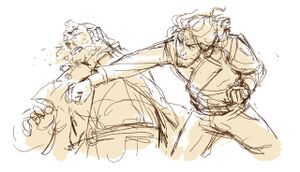 Roshone's manor survived the Everstorm with minimal damage, and he sheltered the village in it. The parlor became a surgeon's triage room, with mats laid out on the floor bearing wounded.[5] When Kaladin arrived to their manor bearing a slave brand, Roshone's first instinct was to bully him, but after a punch to his face and a display of Kaladin's Shardblade, he relented. The revelation that the True Desolation had arrived caused Roshone to sink further, and Kaladin was unable to encourage him before Laral took command of the situation and he retreated to his room.[1]

Occupation of Alethkar to Hearthstone Evacuation[edit]

Under the rule of the singers and The Fused, all lighteyes were made equal to darkeyes. Roshone was reduced to menial work and drinking. He and his wife Laral were part of Lirin's mission to smuggle in The Mink, and Roshone provided the distraction on cue- engaging in drunken antics to distract the singer guards, who were particularly fond of watching a former brightlord who owned them or their likes reduced to a drunkard and a worker.[10]

After Roshone's own political failures, he did what he could to secure his only son's future--arranging for Rillir to marry former Citylord Wistiow's daughter, Laral. Disappointed by his father's dark mood after their relocation to Hearthstone, Rillir convinced his father to go on a hunt for entertainment, which ended with an accident and Rillir's death. While the boy was mortally wounded, Roshone demanded that the surgeon save Rillir before tending his own life-threatening wounds.[9] 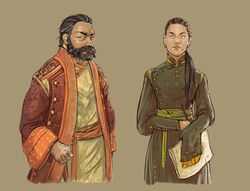 When Roshone was been given authority over Hearthstone, including possession of the mansion and surrounding lands, Highprince Sadeas gave Laral a dowry in compensation. Because of this, Roshone saw the need of marrying her into her family.[6] She was originally engaged to his son, Rillir, but after his death in a hunting accident, this engagement was made to Roshone himself.[4]

By the time of the True Desolation, Laral and Roshone had been married for several years. She claims satisfaction with the agreement and even defends him before Kaladin when he spoke ill of her husband. She seems to have used the marriage to become politically engaged and has strong loyalty from their soldiers.[1]

“You're the one who let old Wistiow die. In a way, it's your fault I'm in this pitiful, miserable quarter of the kingdom. ”

Roshone and Lirin have had a complicated relationship since they met. When Lirin welcomed their new brightlord, Roshone's reply was to blame him for letting Wistiow die.[3] Their relationship worsened when he found that Lirin had a goblet full of spheres, claiming that it was a gift from Wistiow before his death. Roshone made it public that he believed Lirin had stolen them.[8] This changed the relationship between Lirin and the town, and the townspeople simply stopped their donations, all at a word from Roshone. Further pressure from Roshone to recover the spheres was unsuccessful, though Roshone believed that he would eventually win.[8]

After a hunting accident, Lirin was able to preserve Roshone's life at the cost of his leg, but the surgeon was unable to save Roshone's son, Rillir, despite the citylord's protests. This sealed the bad relationship between them, and it culminated in Roshone choosing Tien to go to war and Kaladin following to protect him. With this, Lirin lost both his sons in one day by Roshone's doing.[4]

Years later, after the Everstorm came, Kaladin returned to Hearthstone and found that Lirin and Roshone had a better relationship, probably because of Roshone's guilt.[5]

Kaladin was deeply influenced by Roshone in many ways, including his negative views on lighteyes.[11] Kaladin's life changed after he met Roshone. His family was cornered to eating low cost food and were alienated from the townpeople.[6] As Roshone and Lirin's relationship worsen, so did Kaladin's life, ending in him going after Tien to Amaram's army.[4] Another collateral damage for Kaladin was losing Laral, both as friend and as possible love interest. After Roshone's arrival, he decided she would be married into his family.[6]

Kaladin finally makes peace with Roshone after the Everstorm, when he returns to Hearthstone. Though he wants revenge and punches him at their reunion, Kaladin then puts Roshone's petty actions into perspective and determines to forgive the citylord to some degree. He recognizes he doesn't have any passion on abusing him and prompts him to be a good leader to his town in time of need.[1]

This article is still missing information. Please help The Coppermind by expanding it.
This article was complete and reviewed prior to Rhythm of War, but now needs to be updated.
Retrieved from "https://coppermind.net/wiki/?title=Toralin_Roshone&oldid=167367"
Categories: