The tinningdar[1] is the name for traditional Terris robes worn on Scadrial.[2]

The tinningdar's most distinctive feature is a colorful overlapping V pattern down the front.[2][3] The pattern is embroidered.[2] They are commonly worn with a belt and often have wide sleeves,[4] which can help accommodate metalmind bracers.[5] Stewards may own multiple sets of tinningdar, including more ornate versions that they wear to formal events.[4] 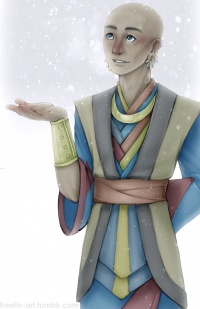 In the Final Empire, Terris stewards traditionally wear a tinningdar in the three colors of the noble house that the steward serves.[2] They are sometimes referred to as "steward's robes";[6] Jastes identifies Sazed as a steward by his robes.[7] Other items of Terris clothing, such as the robes worn by Tindwyl, are colorful and identifiably Terris, but are not mentioned as having the distinctive V pattern of the tinningdar.[7]

Sazed regularly wears the tinningdar, even when performing menial tasks, such as digging a grave[8] or stirring soup.[9] He sees the robes as part of Terris history despite the fact that they also represent the lifestyle forced upon the Terris by the Lord Ruler; he wonders if future Terrismen will continue to wear the tinningdar.[10]

Sazed and other former stewards continue to wear the tinningdar after the fall of the Final Empire,[11] although the colors no longer represent nobility.[6]

The tinningdar is still worn by the Terris 300 years after the Catacendre.[1] Teenage Terris students, including a young Waxillium Ladrian, wear them in the Village.[1][5] Wax does not find the robes comfortable.[5]

Wax "dies" and meets Harmony—presumably in the Cognitive Realm—and perceives his clothing as the tinningdar, with layers of time instead of color.[12]