The Girl Who Looked Up

“Funny, isn't it, how so many of our stories start the same way, but have opposing endings? In half, the child ignores her parents, wanders out into the woods, and gets eaten. In the other half she discovers great wonders. ”

The Girl Who Looked Up is a Rosharan folk tale that may be based on a historical event. 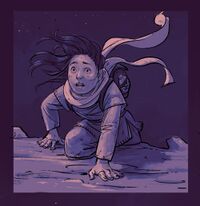 A girl lives in a village surrounded by an impossibly high wall, which nobody in the village acknowledges. The wall casts a shadow that leaves the village in darkness forever. She asks and asks about the wall, and what it keeps out, but the villagers all repeat the same reply: "Don't go beyond it or you'll probably die." They tell her it was built to keep the monsters out.

She climbs the wall, and when she reaches the top she finds a better world, lit by Stormlight. She realizes that the people of her village were the monsters, living without light and the wall was to keep them contained. She steals some light and takes it back to her village. This act causes the storms to come and destroy the wall.

Whilst exploring Urithiru, Shallan tells the tale as a play, using Lightweaving in an amphitheater to create an image of the scenes in the play and eventually emulating a shadowy crowd watching from the stalls.[2] Shallan's narrative tells of a hopeful tale, with an unfortunate end.

The story is then repeated by Hoid to Shallan while she is in Kholinar, after discovering her attempts at helping the native residents had failed.[1] His version of the story includes details of what happened after the girl passed the wall.

This article is still missing information. Please help The Coppermind by expanding it.
Retrieved from "https://coppermind.net/wiki/?title=The_Girl_Who_Looked_Up&oldid=157002"
Categories: