“We will carve a hole to the basement steps, then fight down and clear a path for the queen. By the blood of our fathers! ”

Teofil is a darkeyed infantry battalionlord of the Ninth Kholin Division on Roshar.[2]

Teofil is a grizzled older soldier with a lean body and thick neck.[1][2] He is darkeyed, and his hair is balding and close-cropped. According to Navani, he has a 'powerfully intense' stare.[2]

Unlike other Alethi soldiers, Teofil has no problem taking orders from a woman. He spent years taking orders from inexperienced lighteyes and recognizes that Navani is knowledgeable regarding military strategy. He is levelheaded, pragmatic, and strategic, and can make quick decisions.[2]

Teofil is a brave and capable military leader. He has confidence in his soldiers, but is also realistic about their chances against superior foes.[2]

He has spent time fighting Regals and Fused and has a good understanding of their capabilities with Voidlight.[2] He is also aware that they have weaknesses that can be exploited.[3][1] He knows of Szeth and the power of Nightblood.[2]

Teofil was promoted to battalionlord by Dalinar under a new merit-based policy. He was among the first darkeyed soldiers to reach a high rank.[2] 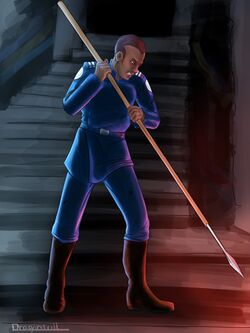 by Dragontrill
Defending Urithiru during the invasion

Teofil had recently come to Urithiru after fighting on the front lines in southern Alethkar when the singer siege began. He immediately attempted to mobilize troops, but the coalition forces had been surprised and were quickly overrun. He soon learned that the singers were using the Oathgates, that Radiant powers and fabrials were not working, and that Tshadr, the only non-Radiant Shardbearer in the tower, had been killed. Despite these setbacks, he attempted to hold some of the lower floors by stationing troops at the stairwells.[2]

“Brightness, if there's a chance to turn this tide right now, I think we need to take it. We lose the tower, and … well, it will be a disaster for the war. If there is even a possibility you can wake the Radiants, I’ll risk everyone we have on that chance.”

By the time Navani arrived to the coalition command center in the map room, Teofil was the only battalionlord and the ranking officer present. Navani sought his advice as she was deciding how to approach the situation without any Radiants. He informed her that the troops in the tower were brave but not among the army's best, and suggested that surrender would be 'distasteful' but a better option than attempting to fight Regals and Fused. When Navani informed him that there was a chance they could recapture the tower using the crystal pillar in the basement, he agreed that the risk of attacking was worth it. Teofil quickly came up with a plan to distract the Fused while simultaneously making a final push through the first floor and into the basement.[2]

Teofil successfully organized a push through the first floor, using a fake retreat and lightning rods to bait and kill a number of Regals.[3] His force was able to reach the basement and strategically defend against the Fused and Regals that were there, including Heavenly Ones and Deepest Ones, using water to disrupt the lightning of the Regals. Venli and even Raboniel were amazed at the organization and tenacity of the humans despite their strategic disadvantage as they attempted to descend a narrow staircase. The group continued to suffer losses, but about fifty men still remained as they approached the basement floor. However, Lezian arrived and used his powers to break up the coalition formation. A group of Regals then regained their lightning powers and blew a hole in the staircase; Teofil and several other men fell to their death as they made a last-ditch attempt to reach the pillar. The rest of the human soldiers were then quickly killed.[1]

Navani learned of Teofil's death from the Sibling and knew that any chance to retake the tower was lost.[1] Venli, who had secretly been rooting for the humans,[1] thought about seeing them die whenever she looked at the stairs, which were hastily repaired with scaffolding.[4]

This page is complete!
This page contains all the knowledge we have on the subject at this time.
Big Smooth (talk) 20:31, 9 September 2021 (UTC)
Retrieved from "https://coppermind.net/wiki/Teofil?&oldid=161380"
Categories: