“ You are His Ruin. I am His Preservation. ”

TenSoon is a kandra of the Third Generation. He was one of the most experienced kandra due to the length of his field service. He held two Blessings during the Final Empire, the Blessing of Potency[2] and the Blessing of Presence. He raised MeLaan.[3] He is known as the Guardian of the Ascendant Warrior after the Catacendre.[4] 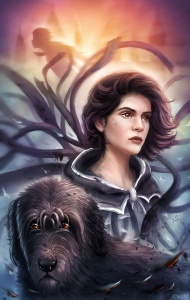 When Elend Venture returns from one of the balls, he sees his father, Straff Venture, in his office, speaking to TenSoon. At the time, TenSoon is wearing the body of a servant from House Hasting.[5]

His Contract was with Lord Straff Venture[5], and was used by Zane Venture to imitate OreSeur, Vin's kandra accomplice. He also took OreSeur's Blessing, the Blessing of Potency, after killing him.[6] TenSoon retained possession of Kelsier's bones after OreSeur's death. He wore the bones of a wolfhound whilst in her 'service', and came to like them. He betrayed the Contract by telling Vin the secrets of the kandra, and by disobeying his master, Zane. He returned to Kandra Homeland and was imprisoned and tried for his crimes. He rebelled and escaped to help Vin fulfil the prophecies of the Hero of Ages.

He encountered Sazed before this and imparted some knowledge onto him, who he saw as the "Announcer." He then took Sazed to the homeland of the Kandra.

After failing to make it back to Luthadel and despairing, he turned back around and returned to the Kandra Homeland in time to help free Sazed from the treachery of the Second Generation. After this he took the true body of a fifth generation guard and once again played the part of another kandra in order to fool KanPaar. His ruse succeeded until Ruin took direct control of his body and began to choke Sazed to death. This then forced him to carry out the resolution and remove his own blessings, thus turning back into a Mistwraith.[7]

His actions in the events of the Catacendre came to be known by the kandra as the "Remarked Duplicity."[8] He is known among Kandra for being the best impersonator and for the speed at which he can change bones. TenSoon has degraded memories from the time right before his spikes were removed.[9]

Waxillium Ladrian met TenSoon who was imitating Captain Brettin after the arrest of Miles Dagouter. Brettin was killed in an unrelated matter, so Harmony had TenSoon impersonate him.[10] TenSoon did not have the opportunity to observe Brettin prior to his death, and so it was an imperfect impersonation. Those who knew Brettin could detect something off about him. TenSoon used Brettin's bones to submit a backdated request to the Senate for a citywide deputized forbearance for Wax.[11] This freed Wax from any charges incurred during his investigation of the Vanishers, as well as granted him powers of investigation and arrest. He informed Wax of this action after Wax and Marasi's final confrontation with Miles. Brettin, still being impersonated by TenSoon, retired after Miles' execution,[12] and presumably his bones were laid to rest.

During the hunt for Paalm he met Wax to guide him to the Kandra Homeland in an attempt to find more information on Bleeder. He first appeared in the form of a very large wolfhound and changed into a human form, then back to the wolfhound. Wax observed him change bones in mere seconds. He helped Wax escape from unknown hemalurgic beings through the remnants of the Pits of Hathsin.[1]

This article is still missing information. Please help The Coppermind by expanding it.
Retrieved from "https://coppermind.net/wiki/TenSoon?&oldid=104764"
Categories: