“Maybe someday you’ll learn how to be there for the living, not just for the dead. ”

Tarah is a darkeyed Alethi woman on Roshar. She once was in a relationship with Kaladin. 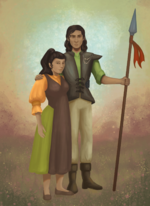 “...Tarah's beauty was a subtle thing. Like an uncut gemstone. The more you saw of it--the more you discovered of its natural facets—the more you loved it. Until one day it struck you that you’d never known anything as wonderful. ”

Tarah has black hair, a round face, smooth hands, and is slightly plump. She prefers dresses of an old-fashioned Thaylen style, and usually wears a shirt in a bright color. Kaladin recalls that she smells of starched uniforms, new leather, and other clean things.[1]

She is reluctant to trust anything she hasn't personally requisitioned, and knows how to squeeze the most out of her spheres. Due to her profession, she is knowledgeable about weapons and comfortable around the fanciful attentions of young men.[1]

“What would have happened to him, if Tarah hadn’t coaxed him out of his single-minded dedication? Would he have burned himself out, as she’d claimed? ”

Tarah's father worked as an assistant quartermaster in Amaram's army, and thus she helped her father with his job. She encountered Kaladin after the young man had begun making a name for himself as a squad leader.[3] One of her tasks was to outfit new recruits, which enabled her to keep Kaladin informed of young boys among the so-called greenvines who needed his protection.[1]

During their time together in Amaram's army Tarah was in a relationship with Kaladin, but after a while she was transferred to Mourn's Vault where she was offered a scribe's job. She saw this as a good opportunity for herself, and in addition felt obligated to accept so that her father could join her there rather than be shipped to the Shattered Plains. After her departure she wrote two letters to Kaladin, but he never wrote back.[1]. She is still alive.[4]

Tarah is concerned about Kaladin because of his grief for losing Tien, and coaxes him out of his single-minded determination in training on the spear due to his guilt over his brother's death. She claims that it will burn him out.[5][2] She hopes Kaladin will someday learn "how to be there for the living, not just for the dead."[1] Kaladin regrets the way things went with Tarah a few years later, considering the ruin of their relationship a failure on his part.[6]

This page is complete!
This page contains all the knowledge we have on the subject at this time.
Jofwu (talk) 20:04, 28 August 2018 (MST)
Retrieved from "https://coppermind.net/wiki/Tarah?&oldid=159388"
Categories: