“All of this, because I couldn't figure out how to die. ”

Lightsong the Bold is a Returned revered as the God of Bravery by the people of Hallandren on Nalthis.[3] 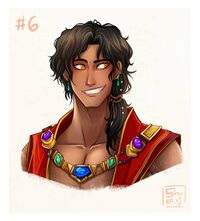 “I need to give something back. Even if it's something useless. ”

As a Returned, Lightsong appears as the ideal specimen of human beauty. Standing at over seven feet tall, he has black hair, chiseled features, and golden tan skin.[4] His colors as the God of Bravery are red and gold, which are used for all of his outfits, as well as those of his priests and servants.[5]

Lightsong doubts his own divinity, and deliberately tries to undermine his own image. He frequently mocks himself, calling himself useless and redundant. He acts apathetic and lazy, and shows little to no interest in the debates between the priests regarding the governance of Hallandren.[6][4]

Despite all of this, Lightsong has a kind and good-hearted nature that shows through in his actions. His mockery, though sarcastic, is never cruel or hurtful. He is also one of the few gods of the time that is known to listen to every one of his petitions, and review every piece of art and poetry that is sent to him as an offering. As a result, Lightsong actually has the most followers of any of the gods, and is highly respected by most of his fellow gods, a fact that he finds disheartening.[7]

As a Returned, Lightsong has a Divine Breath which gives him the benefits of being on the Fifth Heightening. This includes:

Lightsong is one of the Returned with the duty and responsibility of holding the security phrases to control ten thousand Lifeless, a quarter of Hallandren's army.[3]

He is an able investigator, a skill that carries over from his life as an investigative accountant before he Returned. More skills that he learned as a mortal and retained after he Returned are mathematics, sketching, juggling, and a knowledge of sailing terms.[8]

He is also very skilled at the game of Tarachin, even though he has no idea how to play and chooses spheres at random.[9]

Before being Returned, Lightsong was an accountant named Stennimar who was often employed to discover fraud or embezzlement by looking through ledgers to find discrepancies. Stennimar and his niece Tatara would often go sailing as it was a hobby of Llarimar, his brother. During one of the excursions, they borrowed the boat Red Panther and set sail, and encountered a terrible storm. In the chaos, a massive wave swept Tatara overboard and into the raging waters. Stennimar leaped into the ocean and managed to tie her to a rope despite barely knowing how to swim. While he managed to save Tatara's life, Stennimar was unable to save his own life and drowned in the depths. After his death, Endowment granted Stennimar a vision of war and destruction. He was offered a choice to Return and prevent this from happening, which he took.[1] His Return restored the faith of his older brother, Llarimar, who became Lightsong's high priest.[10][1]

“I've spent most of my Returned life just lounging about, but then the moment someone is killed, I leap out of bed and can't resist poking around. Doesn't that sound suspicious to you? ” 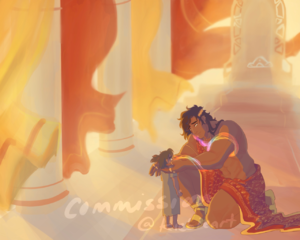 by KiebieArt
taking his weekly Breath from a child in order to continue living.

At the time of the Pahn Kahl rebellion Lightsong had been Returned for five years, and was one of the younger divinities in the Court of Gods.[3] As the God of Bravery, he held the commands to control ten thousand Lifeless warriors in the Hallandren army.

As the potential war with Idris drew closer, Lightsong found himself to be in a position of responsibility, one that he did not desire. Blushweaver was attempting to consolidate control of Hallandren's Lifeless armies under her command, and was actively trying to recruit Lightsong to her side.[12] Throughout this time, Lightsong was having dreams of destruction and the capital city of T'Telir burning.[9]

As Lightsong attempted to distract himself from his visions, a murder of one of Mercystar's servants caught his attention. Lightsong was surprised to find himself interested in the murder, and to discover that he was actually good at investigation.[11] Believing himself to be a detective or constable in his previous life, Lightsong made an effort to begin discovering more about himself and his past.[8]

When Blushweaver managed to obtain control of Hopefinder's and Mercystar's Lifeless warriors[8], Lightsong gave his own security phrase to Allmother, in the hopes that she would oppose Blushweaver's call to war. Allmother surprised him by giving him the security phrase to her Lifeless. Unable to shirk his responsibility any longer, Lightsong took command of Allmother's Lifeless, giving himself control of half of Hallandren's army.[13][14] When the vote was called to go to war with Idris, Lightsong walked away without casting his vote.

“You were a scribe, and you were one of the best men I'd ever known. You were my brother.”

On the night of the Pahn Kahl rebellion, Lightsong and Llarimar entered the tunnel complex under Mercystar's palace, where he stumbled upon Blushweaver being held captive by Pahn Kahl scribes disguised as priests. Convinced that he was previously an investigator and a skilled swordsman, Lightsong attacked the Pahn Kahl, only to discover that he did not know how to fight. After being captured and thrown into cages, Llarimar finally lost his patience with Lightsong, shouting at him and telling him that he had actually been an accountant, not a detective. The Pahn Kahl demanded his security phrase, and slit Blushweaver's throat when he refused. Horrified, Lightsong gave them his phrase when they threatened to do the same to Llarimar.[15]

When the Pahn Kahl prepared to execute Susebron, Lightsong remembered the moment of his death, and the vision of the future he had been granted. Realizing that this is what he had been sent back for, Lightsong sacrificed his life to heal Susebron, restoring his tongue. Susebron, now able to Awaken, overpowered his captors and was able to prevent the war from taking place.[1]

In his early Returned life, Lightsong had a close relationship with Calmseer, with whom he was rumoured to have slept. Lightsong regards some of the Gods of this period, including Calmseer and Brighthue, as very honorable; he remembers them with reverence, saying they are far better and greater than the later Gods.[16]

His most notable relationship at the time of the Pahn Kahl rebellion is with Blushweaver, who is in love with him. Whilst their conversations are highly flirtatious, their relationship never becomes physical in nature, despite Blushweaver's attempts. Even though Lightsong admires and cares for Blushweaver, he opposes her desire for war with Idris.

After realizing that Siri is a naive young woman and not a cunning spy sent by Idris, Lightsong takes pity on her and gives her advice on dealing with the politics of the Court of Gods. Siri thinks of him as the best of the Returned Gods in the court at the time, and comes to rely on him even though he advises her not to.[4]

Lightsong's high priest, Llarimar was also Lightsong's older brother, although Lightsong forgot that fact when he Returned. Llarimar maintains a calm persona, even when confronted with Lightsong's foolish behavior, such as calling him "Scoot." A true believer, Llarimar even educates Lightsong on his own religion and offers encouragement when Lightsong is feeling despondent.[5]

“Not a god, but a scribe. A silly little scribe who was allowed to play god for a few years! A coward. ”

“You are a god. To me, at least. It doesn’t matter how easily you can be killed, how much Breath you have, or how you look. It has to do with who you are and what you mean. ”

“So far this day I have discovered several disturbing and redefining elements of my soul which are slowly restructuring the very nature of my existence. Other than that, it was uneventful. You? ”

“I've tried for years to corrupt him. Never seems to work. I can't even get him to acknowledge the theological paradox it causes when I try to tempt him to do evil. ”

“You're the one that makes us laugh, even while you insult us. Can't you see what that does? Can't you see how you've inadvertently set yourself above everyone else? You didn't do it intentionally, Lightsong, and that's what makes it work so well. In a city of frivolity, you're the only one who's shown any measure of wisdom. ”

This page is probably complete!
This page contains most of the knowledge we have on the subject at this time.
It has yet to be reviewed.
Retrieved from "https://coppermind.net/wiki/Lightsong?&oldid=145502"
Categories: