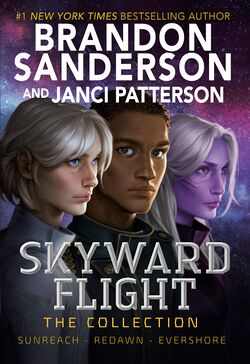 by Charlie Bowater
Cover for Skyward Flight, a combined volume of three novellas

In addition to the main series novels, three novellas will be published, each co-written by Janci Patterson and each following a different point-of-view character.[5] They are set between Starsight and Cytonic. Their initial release will be with ebook and audiobook versions only, but a combined print volume of all three novellas, entitled Skyward Flight, is likely to come in early 2022.[6][7]

Skyward was originally planned as a YA novel set in the cosmere.[9] Brandon began working on it in October 2017 after some difficulty with Apocalypse Guard caused that book to be delayed, and updated his website to read "Mystery Project".[10][11] When he revealed the title of this new project he also announced that it was no longer planned as part of the cosmere because the story needed to reference Earth to work properly.[12][13] The trilogy was officially announced in State of the Sanderson 2017.[14] In an AMA leading up to the release of the first book, Brandon stated that the trilogy would likely become a four book series.[15]

This meta article is still missing information. Please help The Coppermind by expanding it.
Retrieved from "https://coppermind.net/wiki/?title=Skyward_(series)&oldid=159763"
Categories: